Showing posts from April, 2013
Show all

There are no blocks? 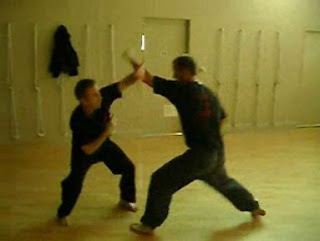 The need for a summary A random snapshot of our sparring. I'm using a classic open hand rising block - even though it was totally unscripted.  Those of you who have been reading this blog for a while will know that the assertion that "there are no blocks" is a major source of irritation to me.  It's another way of saying that the movements in karate etc. commonly called "blocks" are always  something else entirely. "They have to be, after all, because "blocks don't work" - everybody knows that!"  Those of us who don't agree are just kidding ourselves. Over the years I have attacked this assertion in a number of ways and from a number of different angles.  But this is not to say that each of my arguments is somehow separate and unconnected: rather they are all mutually consistent and supportive of each other, creating what I think is a compelling, indeed undeniable, picture of how blocks are a vital part of the traditi
5 comments
Read more 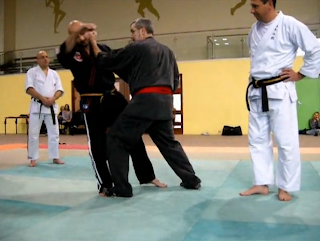 Introduction ﻿﻿ I have previously discussed how blocks aren't " strikes in disguise ".  While they can sometimes be put to use as strikes, they are, in many cases, unsuited to that purpose.  This is because they are often movements that are, for a number of reasons, intrisically defensive rather than offensive in nature. ﻿﻿﻿﻿﻿ Would you believe that this technique is actually meant to be a chudan uke? My " strikes in disguise " article dealt primarily with the rising block (age or jodan uke) and its shortcomings as a "weapon" in terms of things like optimal rotation of the forearm vs. striking surface.  Other "blocks" have a more fundamental failing when used as "strikes" - and this is  their relative "lack of power" .   This failing is particularly relevant to the "chest level" deflection known as as "chudan uke". Like many "blocks", chudan uke uses a motion that is inhe
5 comments
Read more

Why blocks comprise only one movement

The issue Last time I promised to explain exactly why  "blocks" comprise just one movement and not two. But before I do that, I must first set out what is meant by "one movement" and "two movements" in this context. First, I want to make it clear that I'm not talking about two different arms moving (which I covered in my article " Two for the price of one: more about karate blocks ").  Rather, I'm talking about two movements off one arm , intended to deflect or otherwise stop an incoming attack. In a previous article I related this anecdote: I recall as a young martial arts teacher being confronted with this issue when a rank beginner asked me: "What stops me from just hitting you as your arm goes to the side?" The beginner in this instance was talking about the chudan uke or "chest level block" but he might as well have been talking about many of the others.  I recall he smirked as he demons
9 comments
Read more
More posts