Showing posts from April, 2008
Show all 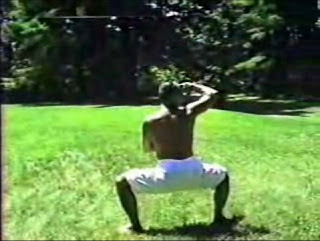 [Note that this is a continuation of Part 1 of this article.] One of the chief differences that has been pointed out to me about the way I was taught to do sanseiru and most other dojo is that in the second shiko dachi a jodan uke / age uke is used instead of the sokumen awase uke . In this variation (as demonstrated by Teruo Chinen and perhaps the most common and regarded as the standard) the feet in the shiko are angled 90 degrees but the body is turned 45 degrees. The kata performer then effects a jodan/age uke (not an inside sokumen awase uke as I had always assumed - it looks like it could be one). The problem I have with this is set out below: The bunkai doesn't seem to me to have the feet at 90 degrees, and for good reason: the angle of your forearm would simply be insufficient to create a deflection. See this video for an example: You'll note at at about point 1.33 that the angle of the defender's feet is about 45 degrees and the body is then further turned so tha
1 comment
Read more

It is known that a version of Seisan was taught in Naha by Seisho Aragaki as early as 1867. Moreover the Shuri and Tomari te styles of karate (the “Shorin” schools) appear to have taught a version of Seisan even before this. Seisan is presently taught in all Goju-ryu schools, in Ryuei-Ryu, in Tou’on-ryu and Uechi-ryu (the "Naha te" schools). Although the Uechi-ryu version is significantly different from the other Naha te schools in the second half, the first half is clearly identifiable as being from the same source. As with Sanchin, Seisan is said to have been performed originally with open hands (which is still the case in the Uechi-ryu kata). Seisan is also still common to all systems of Shorin schools, truly warranting its status as "the universal kata". At first glance the Shorin versions of Seisan appear to be completely different to those of the Naha te schools, however a closer analysis reveals that they too are related, albeit distantly. Goju seisan - as pe
Post a Comment
Read more

Seiyunchin is a kata that contains many locks and holds within its bunkai.  This is hardly surprising when one considers the meaning of its kanji: to control and pull in battle. For me the "king" of all qin-na wristlocks is the one I know as "shao tran" (or more accurately, "xiao chan" meaning "small wrap") - also known as the "z-bar" and (in aikido) as "nikkyo/nikyo" (although I avoid using the latter since the wristlock is only a small part of the particular series of techniques described by that name and which translates as "second lesson"). Seiyunchin covers many variations of shao tran in its applications.  I was recently asked to describe these, so I prepared the following short video in response: When practising shao tran you should take care not to use brute force: shao tran is a technique that requires very little pressure. The late ju-jutsu master Jan de Jong used to tell me that the weight of one finger wa
2 comments
Read more

Sanseiru kata and its variations: Part 1

April 24, 2008
Sanseiru/sanseru is an interesting kata in historical terms. Not only is it practised by all goju-ryu schools and tou'on-ryu, but also by uechi-ryu. Yet it is a kata that has arguably the greatest variation from school to school. The uechi-ryu version appears completely unrelated to the goju/tou'on versions. The tou'on-ryu version is very different from its goju cousin at the beginning (no mae geris) and does not end with the double ko uke. There is also no kansetsu geri, but rather a stomping ball of the foot to the hip joint. Some suggest that this is because Chojun Miyagi learned the kata off someone other than Kanryo Higaonna - he was away doing military service when Juhatsu Kyoda and others learned it. Seiko Higa's version is subtly different, although I'm not sure exactly how - more on that later. I know that our version (brought back from Okinawa in the 60s) looks a little different from most goju kaiha in 2 respects: 1. The "mae/rising empi" perfor
Post a Comment
Read more

Randori - the function of "soft" sparring in martial arts training

Have you ever noticed how dogs prepare for fighting?  They play fight - working at about 1/2 to 3/4 speed by mutual consent (neither dog moves to full speed at any point, even though they could "cheat").  They "pull their punches" - their bites are not the kind that injure, even if the experience is quite "rough and tumble".  And they flow continuously - they don't dart in and out. Despite the fact that dogs never practice "hard and fast" I bet you have no doubt that dogs can fight very well indeed thanks to this "practice".  Just because they "mouth" your hand without breaking your skin, you shoudn't doubt that they can do some serious damage faster than you can blink.  If you've ever been attacked by a dog (and I have on 2 occasions) you'll know what I mean. I believe that it is for this reason that continuously flowing sparring with light contact is not only useful, but essential in martial training.  In
3 comments
Read more