Showing posts from October, 2013
Show all

In my recent article " The roundhouse kick and traditional martial arts " I wrote the following: "So how does an art like karate treat the mawashi geri? What does it do to make the movement less "risky" and more "applicable" in civilian defence?  It makes the movement less of a "power" movement and more a conservative one. It throws the kick as a snap ." In the early days of debating with combat sports fans I lost count of the number of times that I heard this argument: "If it worked so well, why don't we see it in MMA?" Well, as with the front snap kick , I knew it was only ever going to be a matter of time.  And now, in the space of one week, we've had two separate knockouts , both with the trademark karate mawashi geri keage (roundhouse kick using a snap).  The only difference between these and the kick usually taught in karate dojos is that the instep was used instead of the ball of foot (but then again, t
Post a Comment
Keep reading 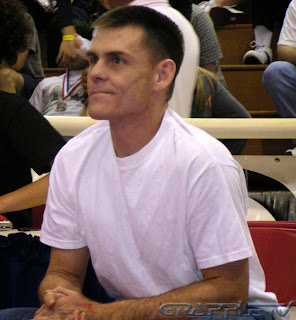 Here is a post by reknowned internal martial artist and researcher, and BJJ practitioner and practitioner, Tim Cartmell on his discussion board from a decade ago.  It concerns the role of free sparring in the development of martial skill. I think it deserves reposting, so I'm setting it out here (and hope Tim doesn't mind me doing so!): This is a very interesting topic, the sparring vs. too deadly to spar dichotomy. My students also get into this discussion with practitioners of other arts that believe they are too lethal to spar. I suppose their is no 'answer' short of no holds barred death matches, but it is important to look at the evidence we do have so that students can make an informed decision, especially students that want to prepare themselves for a real and violent confrontation.   I'll preface my comments by saying I have trained all different ways. I've studied traditional styles of martial arts in which all techniques were supposed to be pot
Post a Comment
Keep reading

While I'm on the topic of tensho, I thought it might be useful to create a video list of partner drills relating to tensho. Here is one from Taira Masaji Sensei: Taira sensei's tensho drill Here are some videos from Patrick McCarthy Hanshi which he has called "Rokkishu Futari Geiko": Part 1 Part 2 And here's a drill from Paul Baumann in Switzerland: Paul Baumann and his wife demonstrating a two person tensho drill Here's my video of kakie from tensho again: Tensho kakie Finally, here's Nathan Johnson applying some tensho ("rokushu") movements in push hands: Nathan Johnson's push hands drills, based partly on "rokushu" Copyright © 2013 Dejan Djurdjevic
Post a Comment
Keep reading

The origins of tensho 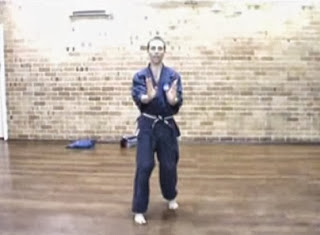 Tensho is a kata that is steeped in mystique.  In particular, there is a lingering "cultural memory" that it stems from an "older" Chinese form known as "rokkishu".  But what is the likely truth about the origins of tensho?  What do we really know about this enigmatic form? We know that Chojun Miyagi openly took credit for developing the kata, just as he did for his version of sanchin (known as "Miyagi sanchin" - where there is no turn), and as he did for the two beginner kata gekisai dai ichi (also known as "fukyugata ni") and geki sai dai ni. It seems Miyagi developed tensho after his trip to China in 1915 1  where, according to orthodox history 2 , he had been researching the origins of Okinawan martial arts, and that he developed this form as an advanced "breathing form" to complement or extend sanchin kata. So what does "tensho" mean? The kanji of are sometimes said to be  天 手  ("tenshu" me
Post a Comment
Keep reading
More posts