Showing posts from November, 2008
Show all

The 5 elements and martial arts 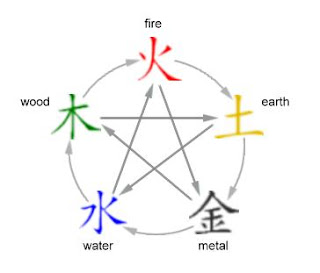 When I first began studying xingyiquan it seemed somewhat strange to me that it should have 5 core defence/counter movements and that these should be described (albeit metaphorically) by reference to the traditional 5 element theory , namely:* Wood (Crushing) 崩 Bēng Fire (Pounding) 炮 Pào Earth (Crossing) 橫 Héng Metal (Splitting) 劈 Pī Water (Drilling) 鑽 Zuān Even more perplexing was the description of these elements as functioning in 2 different cycles, a constructive cycle (生 or shēng) and a destructive cylce (克/剋 or kè). The constructive cycle can be described as follows:* * Wood feeds Fire; * Fire creates Earth (ash); * Earth bears Metal; * Metal carries Water (as in a bucket or tap); * Water nourishes Wood. On the other hand the destructive cycle can be described in this way:* * Wood parts Earth; * Earth absorbs Water; * Water quenches Fire; * Fire melts Metal; * Metal chops Wood. I remember coming back to Perth after a visit to my internal arts teacher Chen Yun Chin
7 comments
Read more

After one hectic weekend I have managed to create my own forum - the Traditional Fighting Arts Forum . I have done so because of my own desire to be part of a community of sincere, enthusiastic and friendly martial artists who want to exchange ideas, information, anecodotes and humour - and occasionally engage in some constructive debate! To all my friends, students, martial arts colleagues and readers I extend a warm invitation to join me there. I can promise you that I will do all in my power to ensure that the forum runs efficiently and that the appropriate standards of courtesy and honour are maintained. Remember - this forum is for any and all who are practising or interested in traditional martial arts from around the world. I hope to learn from the varying perspectives! I apologise to readers in advance if this month is short on articles; I had planned to add to my goju history series among other things, but I might not get to it! Keep well.
1 comment
Read more

The main purpose of kata

The other day I received an email query about the nature and purpose of kata. As it raises some very pertinent issues I thought I would share it with you and also my response. "I was reading your blog and the information on the page for the traditional school of martial arts. I was just wondering your thoughts on the internal art of Tai Chi and the application of solo forms of that as well as katas of karate. The application part is what is all kind of new to me and where I am having trouble understanding. With the repetitive nature of these forms and styles, in real world setting,(not at competitions to gain points)is the aim for it to be second nature and to "re-act" rather than square up and have a formal fight?" This query made me made me realise that I have never really addressed the issue of what I consider to be its main purpose. [Readers of my blog will be aware that I have previously discussed purposes of kata in the articles such as: “ Kata - art or sci
4 comments
Read more 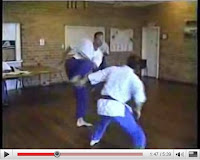 Free sparring in karate is a fairly modern innovation, developed post World War II as part of the drive to popularise karate and turn it into a sport. From there sport-based "distance" sparring ("shiai kumite" or "ippon shobu") spread rapidly throughout the karate world. However as I have discussed previously this type of sparring bears little resemblance to actual fighting and, very importantly, bears little resemblance to how karate was designed to be used . This is especially so when you consider that most karate techniques such as deflections/blocks and tenshin/taisabaki are only really applicable in what I have called the " melee range " - ie. the "toe-to-toe" range where blows are furiously exchanged, not the range where sports opponents circle each other looking for an opening. Parallel to the sport sparring, some Okinawan karate schools developed a form of free sparring that was continuous and free-flowing, based in the me
9 comments
Read more

Introduction In my article “ Kime: the soul of the karate punch ” I described the essential feature of the karate punch as being “focus” – ie. a combination of minimal deceleration before impact and optimum distancing – usually performed in karate with a straight thrust . Many have, and will continue to, argue that this straight thrust is less powerful than a boxer’s follow-through punches. This is true. But to understand why this does not necessarily mean that the former is less effective we’ll have to examine punching methods – what someone I know calls “delivery systems” – in greater detail. To the extent that karate punching is “less powerful”, I will then go on to examine why this is a tactical choice rather than a necessary failing. Categorising punches In a very general sense karate punches can be divided into 2 kinds: straight line and curved. In boxing, punches can be divided into 2 different categories that overlap with the karate ones, namely: 1. jabs (ie. punches which
28 comments
Read more

Kime: the soul of the karate punch

Introduction In previous articles I have alluded to the very different dynamics of punches from karate (and many other traditional striking arts) as opposed to, say, boxing. Importantly, I’ve said that in karate a premium is placed on not pushing your opponent away, but rather causing maximum damage without shifting him/her much, if at all. In other words, the energy in your punch should not be converted into kinetic (moving) energy, but rather be utilised in a destructive effect. [For more on this topic see my articles “ Visible force vs. applied force ” and “ Hitting harder: physics made easy ”]. Hydrostatic shock The mechanics of that effect are best described as a hydrostatic shock. Your body is mostly water (about 70%), and when you punch with focus a shockwave is created in that medium (think of punching a balloon filled with water). The shock then impacts on the nervous system. Consider a punch to the solar plexus: The "winded" feeling results from the punch target
7 comments
Read more
More posts