Showing posts from August, 2011
Show all

Introduction: the basic front kick Following my recent "back to basics" theme and my article " Enter the front snap kick ", I thought I'd discuss how to go about doing a basic front kick. Apart from discussing the basic form and some of the finer points (eg. hip use), I thought I'd also go into the differences between (and the relevant uses of) the front ball of foot kick vs. the heel kick. Step 1 Start by raising one knee (in this case the right) with your knee fully bent and the underside of your foot parallel to the ground. The most common mistake at this point is where the underside of the foot is not parallel to the ground; instead the ankle is pointing downwards. The consequence of this is that your kick effects a scooping action which can damage your toes and is generally ineffective. Make sure that you maintain your guard - ie. you should keep your arms up in a defensive posture. You should maintain the same guard throughout the kick.
6 comments
Read more

Bridging the gap between karate and the internal arts: Part 1 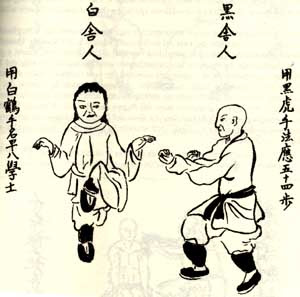 Introduction Many karateka I know have a lingering fascination with Chinese martial arts (even if they sometimes don’t or won’t acknowledge it publicly). That is to say, they want to know more about the Chinese arts to see whether this knowledge will enrich their understanding of karate. After all, karate is said to be a descendant of the Chinese martial arts: even its name “karate” is a reference to its mainland origins. The original characters for karate were 唐手, which literally translates as “hand(s) of Tang”. The character for “Tang” (唐) was a reference to the Tang dynasty and became widely used to refer to China. In other words, karate originally meant “Chinese hand”. It was only in around 1932 that a decision was made, due to political pressure arising out of the prevailing nationalism, to change the characters to “空手”, a homonym which means “empty hand”. I have dealt with the connection between karate and the Chinese martial arts in various articles (for example, see
12 comments
Read more
More posts