Showing posts from June, 2013
Show all

Here are a couple of videos that struck a chord with me regarding violence against women - and violence in general.  In a roundabout way, they led me to start thinking more generally about martial arts and its relationship to violence. I've long been a fan of the actor Sir Patrick Stewart. 1   In the first video below you will see him bringing all his considerable  gravitas  to bear on a very serious issue.  He shows himself to be a true humanist, as well as a man of great insight, wisdom and compassion. Stewart talks about the abuse his mother and he endured at the hands of his father.  It is a most touching and revealing account of what it means to live with the constant threat and fear of physical violence. I've included the second video below because Stewart goes one step further to reveal the most likely  cause of his father's violence : untreated, chronic and severe post-traumatic stress disorder from fighting in World War II. It is important to note that
Post a Comment
Read more

Most martial artists - in fact most people - alive today know of Bruce Lee.  And many of will know what he called his personal martial arts system: Jeet Kune Do - the Way of the Intercepting Fist  Okay - so what did he mean by that?  Lee goes some small way to explaining his system in this (famous) episode of Longstreet (set to start at the correct point): But I suspect that you, like me, are left with a sense of dissatisfaction after watching this.  What does "interception" mean in this context?  Does he mean "stopping"? Or does he mean "preventing" by some other means?  And what exactly is he "intercepting"?  Is he intercepting a particular attack (ie. an aggressive movement)?  Is he intercepting some physical cue of the attacker's intention ?  Or is he intercepting the attacker generally  (assuming "interception" has any meaning in such a context)? All of this serves to present a kind of "apparent paradox"
Post a Comment
Read more

The secret of the sinking backfist

Master Wu Bin demonstrating the sinking backfist (image courtesy of Kung Fu magazine) Following my previous articles "How civilian defence grappling differs from sport grappling" and " Elbow locks: an introduction ", I wanted to discuss one particular technique that warrants special attention in both contexts: Many of you martial artists will be familiar with the movement depicted on the right (demonstrated by Master Wu Bin - one of China's leading wushu trainers, as featured in the Kung Fu Special Edition 2012 magazine): This is a technique that features regularly in Chinese martial arts forms (including the feng quan forms taught in the Chen Pan Ling system). But what in the world is it? One of its main applications, as often demonstrated to me by Master Chen Yun Ching , is not as a backfist strike , but rather as an arm bar  to the elbow. Why in the world would you ever want to do an arm bar in a low, cross-legged stance like this, you might a
Post a Comment
Read more

Knowledge of the ancients 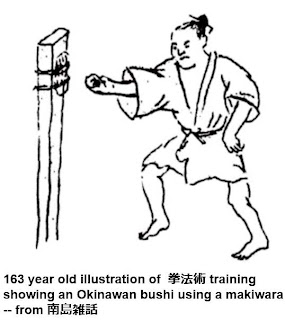 Image and caption courtesy of Ryan Parker From time to time I engage in debates with modern combat sports fighters/fans.  After the inevitable: " If it worked, we'd see it in the cage/ring ," arguments are played out, we often come back to the same issue: ancient vs. modern technology. "Why should anyone esteem ancient technology?  After all, we don't do it in any other field of endeavour.  We don't look to the past to decide how clothes should be made, how crops should be farmed, how teeth should extracted/filled, how diseases should treated, how food should be preserved , etc.  We question everything - and so we should.  We take what has been done before and improve on it.  Why should it be any different in regards to martial arts?  Today's fighters have better technology than the "ancients" ever had.  Adhering to their traditions isn't just blinkered - it is dogmatic; unscientific.  There is no reason to assume that knowledge is bet
Post a Comment
Read more 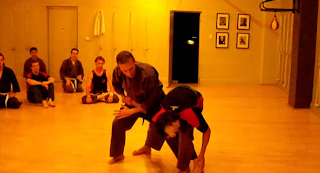 An example of a karate arm bar: Note how Rob is kept just out of grappling range - and off-balance to prevent him entering grappling range. There is a tendency among many karateka today to find grappling applications (bunkai) in their kata.  That is fine.  Yes,  karate is (undeniably) a "stand up" fighting art, first and foremost, but it also has grappling applications . My only problem with grappling interpretations of kata arises when the bunkai strays into "kata has comprehensive, built-in BJJ applications!'" territory. Let's make this simple, shall we? It doesn't. Karate and other traditional civilian defence arts are not, and never have been, grappling arts  - at least not in the same sense as judo, jujutsu or Greco-Roman wrestling.  If they were, they wouldn't involve quite so many solo "kata", so many obvious punches, kicks, strikes and " blocks ".  They would mostly revolve around... grappling !  With a partn
Post a Comment
Read more
More posts