June 13, 2013
Most martial artists - in fact most people - alive today know of Bruce Lee.  And many of will know what he called his personal martial arts system:


Jeet Kune Do - the Way of the Intercepting Fist

Okay - so what did he mean by that?  Lee goes some small way to explaining his system in this (famous) episode of Longstreet (set to start at the correct point):

All of this serves to present a kind of "apparent paradox" of which many "philosophically-minded" martial artists are often fond: words so general, perhaps even ambiguous, that we can give them whatever meaning we want.  Or words we can pretty much ignore.

Well I'm going to do neither.  I'm not going to fawn over Bruce Lee's words as some kind of Buddhist-style mantra, nor am I going to dismiss what he said as merely trite or tautological.  I think he was really onto something here: something simple, yet profound - and I want to give you my thoughts on the subject. 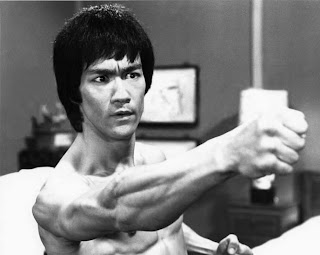 The first thing we need to note is the actual translation of "jeet kune do".  Literally it means "intercepting fist way" (截拳道 jiéquándào in Mandarin).  It should be clear from the above video that Bruce wasn't talking about "intercepting with a fist".  It could be the foot.  Or anything else.

So why refer to "intercepting fist"?

The answer is, I believe, surprisingly simple: rather than think of the term as
"intercepting-fist way", one should think of it as "intercepting fist-way".  Note the subtle difference: I'm linking "fist" with "way", rather "intercepting" with "fist".  Why do this?

The fist is a general symbol used to denote martial arts in both China and Okinawa. (In terms of the latter, note that despite the traditional use of "ti/te" - ie. "hand" - to describe unarmed fighting in Okinawa, the fist still has an instantly recognisable association with karate: witness the number of schools that feature the fist in their school patch!)

It is for this reason that martial arts in the far east are often referred to as "quan fa" or "kempo/kenpo" (拳法). This term means "fist principles" or "the law of the fist" ("quan" means "fist" and "fa" means "law", "way" or "study").

Of course, "do" (道) means "way" and is often used instead of "fa" (法) in naming a martial system (in much the same way as we might, in English, alternately refer to a "way of doing something" or a "method of doing something").  In other words, "quan fa" and "quan do / kune do" are both terms for describing martial arts systems.  "Jeet" (intercepting) qualifies this more general martial reference.  So I think what Bruce Lee meant by "jeet kune do" was this:


"A martial system (ie. a "fist-way") characterised by interception".

Okay, so far so good.  Why is this notable?  By "interception", surely Bruce Lee simply meant: "Just hit the guy first"?  It's simple, right?

Well I'm giving the man credit for a bit more than prescribing such a brutish and simplistic philosophy.  For a start, it should be obvious that mere "hitting first" isn't always interception.  It is more often pre-emption.  These are two very different things.  "Hitting first" might even be nothing more than unprovoked attack.

Now it is true that hitting first means being proactive rather than reactive.  And Bruce was certainly a "proactive kind of guy" in general terms.  He wasn't exactly the type to "wait around for people to hit him", was he? 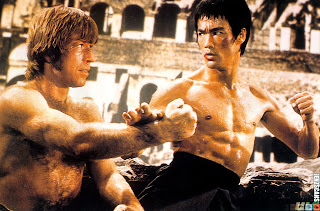 But I'm not referring to any kind of "waiting around".  I'm merely talking about there actually being an attack for you to intercept.

If Lee's martial system was really based on simple pre-emption, it wouldn't have referred to "interception" at all: after all; there would be nothing to "intercept".  You'd be attacking - pure and simple.

So I'm going to go out on a limb here to say the following:


In calling his system "Jeet Kune Do" Bruce Lee was clearly making reference to responding to aggression - not pre-empting it, and certainly not initiating it!

And why would this be so surprising?  Bruce Lee was steeped in Chinese philosophical tradition.  Whether you go by Confucian or Daoist values - or those of Eastern religions such as Buddhism - you see the same principles of "non-aggression" arising again and again, and manifesting in traditional "civilian defence" arts - right down to specific techniques.

Under these principles, any act of aggression is to be avoided unless it is a regrettable necessity.  Accordingly, traditional civilian defence arts of the Orient are not about fighting.  They are about not fighting (remember Bruce Lee's reference to "the art of fighting without fighting"?).  They are about defence, not offence.

It is worth noting that even the character "wu" or "bu" (武) meaning "martial" (eg. wushu or budo) is made up of the elements of "sword" and "never to be drawn". (The character 武 consists of two characters 戈 and 止 which mean “sword or weapon” and “stop” respectively.)

Remember Mr Miyagi from The Karate Kid and how he says: "Karate is for self defence only"?  This isn't just some movie/pop culture cliché: it is a philosophy "hardwired" into almost all Eastern civilian martial traditions.  It is for this reason that we have the famous karate maxim espoused by Gichin Funakoshi:


"Karate ni sente nashi."  There is no first attack in karate.

The underlying "aggression only when necessary" nature of traditional Eastern civilian defence arts is precisely why the script writers had Mr Miyagi teach Daniel-san defensive movements first.  Okay, we can laugh at Ralph Macchio's poor technique and the rather implausible training methods.  But every karate practitioner recognises the deflections being employed in "sand the floor" (gedan barai), "wax on, wax off" (hiki/kake uke), and "paint the fence" (ko and shotei uke).  And, I dare say, every taekwondo/gongfu practitioner recognises their own systems' variations of these basic movements:


So what do we call these "defensive movements"?  Previously, I've called them "blocks" - and acknowledged that this term is woefully inadequate.  Because they aren't "blocks" - at least not always.

Rather, they each comprise a response to an attack: a response that intercepts the attack before it can do damage.  Ideally, the interception is effected as soon, and as proactively, as possible - an observation with which I am sure Bruce Lee would have wholeheartedly agreed. But an interception is rarely a pre-emption (note, I didn't say "never" - but "rarely").1


Okay so what do I think Bruce Lee meant when he used the term "interception"?

I think it is clear, judging from Lee's written works and picture/film demonstrations that his concept of "interception" involved all of the following:

First, I think we need some sort of label.  There is too much science and skill underpinning these techniques to lump them with "attacks" (or just "do this" techniques).

And I've previously discussed the limitation of the term "block".  It mostly covers the last approach - the "shield".  It also covers so-called "hard blocks" - simply trying to smash your opponent's arm or otherwise place an obstacle in its path.  Both of these have little to do with the science and skill to which I refer above.

"Parry" and "deflection" are all very well for the "centreline" concept of interception.  But they hardly cover interceptions at the source (eg. jams) or at the last moment (eg. shields).

Well, karate traditionally terms such techniques as "uke": how you receive an attack.  Note Max's comment below that: "The 截 in 截拳道 also translates to "receive/catch", almost in the same way uke means "receive"."

As a term, "receive" is reasonably accurate in its scope.  But as an English translation... well basically, it sucks.  Talk to most native English speakers about a "reception" and they'll think you're referring to the party held after a wedding.  Or maybe the entrance lobby to a building.

Furthermore, I must confess, "receiving" an attack sounds much too passive for my liking.  It has all the negative connotations that MMA fighters typically attribute to traditional "blocks": ie. "waiting for someone to hit you".

This leaves me with "interception".  This is a term I can really "dig" (to use the language of Bruce's era): it accurately describes a technique which travels to the attack by the fastest, most direct/appropriate route - then "receives" it at an optimum angle and on an optimum plane in a way that displaces, thwarts or otherwise negates the attack.  It is "receiving" - but with attitude!

Moreover, as I've previously noted, the science and skill of a "block"/deflection/parry/redirection etc. is all contained in the moment of contact during the interception.  This is where the technique works or fails:  Everything has to be correct, eg:
and so on.

All the "magic" happens at precisely one moment: the point of interception.

Accordingly, from now on I propose to use this term "interception" for traditional (and non-traditional) "uke". In my opinion no other term is remotely as appropriate.  I hope you join me in this endeavour.  Let's change the way people talk - and think - about "uke".3

1. I think any traditional martial arts teacher will agree that circumstances might arise where it becomes necessary to pre-empt certain attacks with  your own - eg. if there is a sufficiently high probability that you will be attacked and if your response to that imminent attack is reasonable.

To some extent, such a response might even be permitted under your law.  However please note that it will always come down to:
I cannot advise you in this regard; if you have any questions/concerns about this issue, you need to consult a lawyer who specialises in criminal law in your jurisdiction.

2. A centreline technique can be achieved as both deflection and counter off the same arm or with one arm taking the centreline while the other launches as supporting attack at the same time (both options are often termed "simultaneous" techniques).

3.  Think about how much more difficult is it for a skeptic to "debate" traditional "blocks" once you call them what they really are - interceptions:

All these arguments start sounding as absurd as they actually are.