Readers of my blog will be familiar with my previous discussion concerning what have become known as cluster “H” and cluster “M” goju-ryu kata (see my article The origins of goju-ryu kata: Part 1).

Cluster “M” consists of the remainder.

Katas in both clusters follow a general design pattern as follows:

A — an opening sequence
B — the body of the kata, often capable of being broken up into smaller groupings, eg. B1, B2, B3 etc.
C — a closing sequence.

What differentiates the clusters in design terms is the portion I have labelled “B”:

The particular asymmetry of sanseiru

In no kata is the asymmetry of cluster “H” so noticeable as in sanseiru, which features a series of 4 mae geri (front kick) and 3 yoko geri kansetsu done off the right leg, one after the other, turning anti-clockwise. The asymmetry was so palpable that I remember my teacher telling me a legend that the kata was designed by a man with a wooden leg (forced to kick with one leg only). While it is a charming legend, I haven’t heard it substantiated anywhere.

I define portion “B2” as that featuring the shiko moves with the low “X” blocks (performed on the right side only).

I define portion “B3” as the sokumen awase uke ending with the double simultaneous punch. In sanseiru this portion is symmetrical.

Portion “C” of sanseiru is the 270º spin and double ko uke/uchi (back of wrist blocks/strikes). 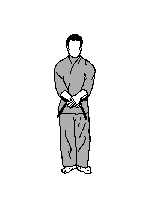 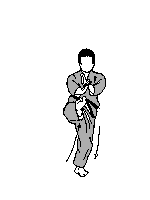 B3 (right and left sides)


An “extended” symmetrical version of sanseiru

Since 1989 I have tinkered with designing a “symmetrical” version of sanseiru — at least one that was symmetrical in the “B” portion of the kata. My initial attempts were aimed squarely at the fact that sanseiru reaches a point at the end of the right side of portion “B3” where you can start portion “B” again but this time on the left side. Done this way the kata can be made symmetrical by performing portion “B” entirely on the left and then entirely on the right in this fashion:

Consider the video below:


An extended version of sanseiru

You will note that in the standard kata, after the first double simultaneous punch the performer will turn around 180º and do 2 chudan uke (chest blocks). This is the usual methodology in goju kata for changing “sides” (consider the kata shisochin after the front kick and turn, or gekisai dai ichi and ni after the first foot stamp).

In fact, after you do the turn and the 2 chest blocks I used to feel the need to do a mae geri or kick on my left leg — almost instinctively. I remember discussing this issue with my friend Martin Watts who practises Yong Chun baihe (white crane). He said his forms had a similar asymmetry. He had written to his teachers asking for permission to simply repeat portion “B” on the left side and they had told him that this was quite an acceptable means of practise. I think it is arguable that this was possibly even the intention of the designer.

What if sanseiru were designed along cluster “M” principles?

It occurred to me that cluster “M” kata don’t follow the “balancing” methodology I have adopted in the above “extended” version of sanseiru. In particular portions B1-B3 are not performed in their entirety on the right only to be repeated on the left. Rather an examination of the cluster “M” kata reveals that each B sub-portion is repeated right and left before the next sub-portion is commenced..

Now it seemed to me that the distinction between sub-portions “B2” and “B3” was largely artificial: they were too intimately connected to be divided, so with this in mind I thought that the standard methodology for cluster “M” would result in sanseiru having the following structure:

This is demonstrated in the video below:


Sanseiru as a cluster M kata

It appears to me that sanseiru is a kata that is so asymmetrical that it is crying out for “balancing”. While I quite like the elegance of the cluster “M” variation, my brother and I have decided to use the “extended version” in daily practice. Why? It is identical to the standard kata — with some moves repeated right at the end. Some might feel that the kata is a tad too long, however it remains quite short as far as Chinese forms go and is still well short of a form like suparinpei.