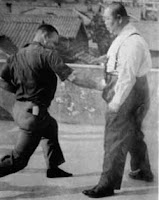 There is a persistent myth that I've heard over the years that somehow training in the internal martial arts gives you a big belly.

I've never regarded this myth as anything other than an obvious, self-referential joke: ie. "I don't have a beer gut - it's just that my belly is full of qi/ki."

Recently however I have become aware that some people actually think there is such a syndrome. Just yesterday a correspondent on an internet forum said that practising internal arts had given him a "dropped diaphragm" that "stretched the fascia" giving him a "thick inflated core [which] is great for MA but definitely not a hit with the ladies".1

Indeed, many famous internal martial arts masters were, shall we say, well endowed in the mid-section. Consider the picture at the top right of this article of Wang Shujin, a formidable street fighter and student of the famous internal arts teacher Chen Pan Ling (my teacher's father).

The forum correspondent also gave the example of Yang Chen Fu (on the left) - another famous taijiquan teacher.

Indeed there are so many taiji practitioners past and present who had a big stomach that one is spoiled for choice. Did/do these practitioners have a "dropped diaphragm" or are/were they just carrying fat?

I'll say at the outset that it is possible to have a very strong physique - with apparently little or no skin to pinch - and yet still have a big stomach. In fact the forum correspondent on the forum cited such an example: consider the picture on the right of UFC fighter Chuck Liddel (of whom the forum correspondent said there was a "bit of a Taiji belly going on there").

Even in my gym there is a rugby player (who is very likely one of the strongest people I've ever met) who has broad shoulders, muscled arms and legs - and a thickened torso to match. I doubt you could pinch any of skin on his stomach in a skinfold test. He doesn't look "fat" - he's just... "big".

Is this evidence of the "dropped diaphragm" syndrome? The answer is, quite simply, no.

To quote my brother (who has a degree is sports science):2

"Now, I might be wrong, but as far as I recall from my university training in anatomy, physiology and sports science - there is no such thing as a dropped diaphragm. It is true that hypertrophied abdominal muscles (eg as bodybuilders have) will produce a rounded belly when the muscles are relaxed - but few internal martial artists have this problem!

Many men can appear fairly lean and store little sub-cutaneous fat but still have enough intra-abdominal fat to have a gut."

In other words, just because you can't pinch the skin doesn't mean there isn't fat there. It's just that the fat might be (somewhat dangerously) deposited around the internal organs rather than subcutaneously.

In the case of my rugby player friend, he has very strong, large stomach muscles from years of intensive, weight-bearing exercise. He probably has a bit of fat too (both subcutaneous and intra-abdominal), but such as it is , it doesn't concern him. From the perspective of a rugby full-forward, it is no surprise that he recently said to me: "Any weight is good weight".

The mere inability to pinch skin around the stomach is not a reliable indicator of your fat levels. Again, quoting my brother:2

"Different skin fold test protocols can give different results. I use a protocol that assumes and makes allowance for intra abdominal fat in the calculation."

So what's the story with Wang Shujin and Yang Chen Fu etc.? Were they fat? Definitely. I know people who trained directly with Wang - and they all say he was very fond of his food.

I could also say that I have a "dropped diaphragm" - my belly is somewhat rounded. Yet, at the same time, I am not fat. I'm not lean, but I'm not fat either. When I tense my stomach muscles you can clearly see 3 levels. My upper stomach is, in particular, quite hard and even my lowest abs haven't really got much to pinch. But my stomach protrudes nonetheless.

Evidence of internal training? Sadly, no. In my case it is a combination of:

(a) (happily) strong stomach muscles from weight training in the gym; and
(b) (unhappily) fat deposited both subcutaneously and intra-abdominally.

In respect of the latter I take after my late father: he stored his fat principally around the midsection - and not necessarily on the periphery. His stomach was big, but rock-hard. In this regard he exhibited a fat-depositing trait quite common to men. How many men do you know who are in their mid-twenties onwards and who have skinny arms and legs and chest but have a protruding, rounded (hard) belly? Heaps.

Women however tend to deposit fat around their hips and thighs (the common and much lamented "pear shape"). The latter is, in fact, a lot safer in terms of health; intra-abdominal fat is known to be quite dangerous.3 My late father died at age 48 from coronary artery disease. The extra fat he was storing (particularly intra-abdominally) was clearly a contributing factor.

The forum correspondent I referred to earlier noted that many students at his internal arts school seemed to be developing "dropped diaphragms". However if you ask me, it is more likely that he and his fellow students are simply aging - and developing typical male-pattern fat deposits...

On a final note, I will observe that both Chen Pan Ling and his son (my teacher) Chen Yun Ching are slim (see the picture above on the left) - despite a lifetime of internal martial arts training.

1. See this thread on the Perth Street Bikes forum.

3. See this newspaper article for example.