"Pi is able to conquer Beng and Beng is able to defeat Heng. Heng is able to subjugate Zuan and Zuan is able to overmaster Pao. Pao can overcome Pi. All of these belong to the theory of Yi (Change). Looking for the real meaning is nowhere else but within the Five Phases" - Ancient xingyiquan Song of Mutual Conquest

Readers of my blog will be aware that for years I've pondered what is called the "destructive cycle" of xingyi's 5 elements: each is meant to be a foil for another in a kind of 5-way "rock, paper scissors". I'm not the first person to suppose that they can be (and were indeed intended to be) arranged into a looping 2 person form.

While there are plenty of 2 person "destructive cycle" xingyi forms out there, not one follows the order of pi, zuan, beng, pao, heng (at least in a way that results in each attack being deflected and countered). Normally there are repetitions of pi or beng, or a completely different order.


One of the "standard" destruction cycle forms of xingyiquan performed by my senior James Sumarac and Andrew Cheung Sifu - a great form, however note the repetition of the elements

While some of the destruction cycle forms I've seen are really quite good, I can't help but feel that they haven't grasped the key to how the elements interact. One example I came across recently follows the order of the elements, but lets the pi quan (splitting fist) "land" (ie. it is not deflected). I think it is dangerous to groove a response that lets the pi quan through. A pi quan strike to the shoulder can be devastating. And we also know that pao quan should, in theory, negate the pi quan.

Following my xingyi seminar I had some realisations about the application of the elements (based on ideas I've been mulling over for a decade or so). I realised that if I put those applications together into a 2 person drill they would each be an effective response to the other. The other night I successfully tested my theory as a 2-person drill - I had at last "cracked the xingyi code".

I've ironed out a few things with the footwork since (the footwork really is the key - and the footwork is straight from the basic form of the elements).

So my collection of applications match the order of the elements perfectly:

It is important to note that the side 1 and side 2 both perform the constructive cycle; it's just that they start at different points in the sequence. The order in which the sides take turns at doing things however is the destructive cycle, thus:

As I've said, the key to understanding the application of xingyi lies in understanding how the footwork of the elements changes relative you partner/opponent. I discuss this briefly in the video below:


Applied xingyi footwork - the key to cracking the "xingyi code"

The interplay between beng quan and heng quan is quite fascinating and was one of the big "aha" moments in putting the drill together. 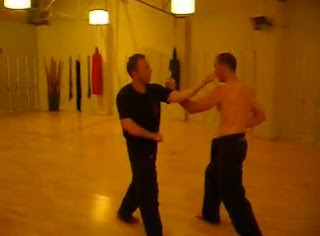 Beng quan can then defeat heng quan by firing straight forward so that it stifles the heng quan. I've found that when you use your beng quan in this way it will usually have to be angled slightly differently from when it is used as a strike: in other words the beng quan will serve primarily as a deflection rather than a strike.

Indeed, if you try to convert that beng quan into a strike, the heng quan can itself be "curved more" so as to deflect the beng. In other words, this is really a "stalemate" position and marks the epicentre of the drill. This matches the ancient poems which talk about heng quan being the "base" of the elements or the point of "change" (depending how you look at it). On this subject I'll quote from another site:


"Heng Quan is considered to be neutral, or the center of the Five Elements. It is located centrally between Yin and Yang, and constitutes a bridge between them. In the Five Elements, it is like a ball rolling and belongs to Earth... Everything grows from the Earth."

[See this site and also this site.]

You will note from my solo drill that I actually fire out 2 beng quan in succession. I feel this is entirely consistent with the 5 elements. In many schools beng quan is performed in precisely this way, namely there are 2 beng quan punches, one with the reverse arm, then another with the leading arm. Luo De Xiu (who practises the xingyi of Hong Yi Xiang) does precisely this in the video below at 2:53 to 2:55.

It is that second beng that is answered by pi quan.

And so it goes.

Here is a longer video discussing the principles of my suggested form: