I have previously discussed how traditional strikes are stopped by the practitioner at a pre-determined point; they do not rely on the target to stop the strike. [For the purposes of this article I shall simply refer to “strike”, but you can take this to refer to any kind of strike, punch or kick.] 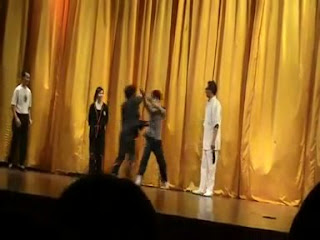 I have discussed how this needn’t mean that the traditional strike is “weak” – it may not carry as much force as a “follow through” but it makes up for this at least in part through concepts like “kime” (focus) and hydrostatic shock.

But what is the imperative that causes virtually every traditional Far Eastern traditional martial art to stop strikes at a pre-determined point? Why not simply follow through with each technique until it is stopped by the target?

The answer lies in priority. Unlike, say, combat sports or military disciplines, civilian defence does not prioritize hitting. It prioritizes not being hit. Accordingly, civilian defence strikes are inherently conservative insofar as they try not to create unnecessary openings or leave the defender over-extended or unbalanced.

How do they achieve this?

Civilian defence strikes are structured so that the defender is left in more or less the same position as he or she was before the strike, with posture and balance intact. If they did not, the defender might not be able to recover from a failed/missed strike – whether in order to deal with the same attacker or others.

In this context it should be unsurprising that traditional strikes will overwhelmingly take the form of straight thrusts or snapping actions – since these are naturally self-limiting when it comes to a “pre-determined stop”.

A swing, on the other hand, is potentially unstable – unless it is performed in the way of, say, Shaolin systems like Choy Li Fut, where the arm swing is, at some point, brought to a halt at a pre-determined point.

In civilian defence the dangers in not being conservative in one’s strikes are, I believe, self-evident. Uncertain terrain, multiple attackers and armed opponents are just some of the variables that could lead to your defeat if you miss your strike and find yourself off balance.

Indeed, such is the premium placed on balance that this is one of the principle reasons traditional martial artists use deflections in conjunction with evasion; the use of a deflecting arm reduces the amount of “lean”, “duck” or “weave” the body has to make to avoid the strike. As I discuss in my article “Evasion vs. Blocking with evasion”, this is the main reason that traditional martial arts adopt the “upright posture” so maligned by combat sports practitioners.

Consider the following video of just what can happen if you rely on your target stopping your attack.

The relevant attackers all suffer from the same problem: their priority is attack, pure and simple. They want to harm. They are not interested in their own defence, only in striking their opponent with maximum force. Their obsession with maximum force is ultimately their undoing. In each case, they miss, and overbalance terribly.

Later in the video you will note the boxer I discussed recently using conservative thrusting strikes very effectively. These thrusts contrast with his very first, panic-stricken swings (although even these swings were controlled and did not overbalance him – by contrast to his opponents).

Note also the asides in the video, showing that deflections are indeed used in civilian defence scenarios: in the Wing Chun example, the aggressor throws a committed straight right cross which is deflected by a textbook hiki uke or kake uke – one of the staple “blocks” of karate, but which is also extensively used in both southern and northern Chinese systems (including the internal arts).


A video of the hiki uke of karate

Later on the boxer referred to in my previous article is shown clearly deflecting another committed cross, again using a forearm deflection. So much for “blocks don’t work”.

Which brings me to another point: it should come as no surprise "blocks" (ie. deflections or parries) in tradional Far Eastern fighting arts are also brought to a pre-determined stop. Consider the video below relating to the basic age or jodan uke (rising or head level "block"):


A video about the dangers of over-extending a rising block

From this video you will note that it is imperative that one should limit one's blocking movement to where the technique would otherwise go if it encountered an attack. If one takes the arm any further (which might occur if one relies on the attacker's arm to stop the block but it doesn't), one risks over-extending and creating a large opening. Blocking only as far as one needs to go means that if you miss the strike, or the strike is actually a feint, your hands will remain within the guard position allowing you to -Accordingly, traditional strikes and blocks are stopped at pre-determined points because they are tools used in civilian defence. As such, they are inherently conservative with movement, prioritizing best defence rather than best offence.