Here is the second extract from my forthcoming book "Essential Jo". 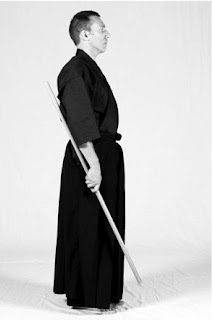 As with golf, tennis, or any other activity which requires using a stick-like object, your grip is one of the most important features.

The “informal grip” is one you adopt when you are not actively engaged in training. We use the traditional method also seen in other Japanese and Chinese weapons arts: the weapon is held palm down and behind your shoulder. This is not only subtle and non-confrontational; it also provides an element of concealment and surprise, should you need it against would-be assailants.

Surprisingly, the hold is also quite effective in allowing a “quick draw” for defence.

The key to this “quick draw” is to hold the jo slighly off-centre, palm closer to the end facing downwards. I’ve found that the ideal point is approximately one palm width from the centre (or slightly less than that).

What this means is that when you drop the jo naturally it slopes upwards at a gradual incline – an incline that permits you, where necessary, to jab the jo forwards at an attacker so that it follows a straight line directly to your opponent’s eye (or face generally).

In other words, if you have the correct bias to your grip, your relaxed thrust will not have any “upwards scoop”. All this can be achieved without any effort or muscular exertion – merely by having the right grip.

The “rule of quarters”

I have a rule that I follow in terms of handling the jo – a rule which I call “the rule of quarters”. This is because, apart from the informal grip referred to above, I believe that the jo should principally be held with one hand at the end, and the other at the quarter marker closest to that end.

When you slide the jo through your hands you generally move one hand up to the ¾ mark, then swap ends.

I’ll detail this further on in relation to the hand changes. It is sufficient for the present purposes to note that the quarter markers are significant. In order to isolate these, grab the jo exactly in the middle, then find the midway point from the middle to the end. This will be where one of your hands should grip, while the other goes to the end. 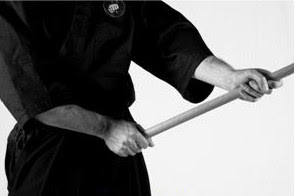 The basic grip at the conclusion of a thrust is performed in accordance with the “rule of quarters”: your right hand is at the butt, while your left hand is at the nearest quarter point.

Both hands grip the jo naturally and in a relaxed fashion. In this respect it is important to note that except at the point of impact the jo is never gripped too tightly.

The “slide then jab” principle

In the coming Chapters, I will frequently make reference to something I call “slide, then jab”. This is the central principle for thrusting with the jo as it ensures the appropriate staged activation which in turn delivers optimum transfer of momentum and accordingly maximum application of force to your target.

Under this principle you must thrust in exactly this sequence:It is important to remember that in the first part of the movement (the slide) you are not moving your front arm forward – all that is happening is that you are sliding your jo through your front hand to the ¼ position (in accordance with the “rule of quarters” as described above).

After you have finished sliding to the ¼ position you should throw your front arm into your thrust (keeping your thrusting grip at the ¼ mark firm).

The basic grip at the conclusion of a strike is also performed in accordance with the “rule of quarters”. However in this case your left hand is at the butt of the jo while your right hand is at the nearest quarter point (with a slightly different grip – more on that in a moment).

The left/right difference is quite critical to the theory behind the jo. From the outset it should be observed that jo techniques are not to be applied ambidextrously. Note that the jo is “right side biased”. It is merely that the right and left are employed quite differently. Thrusts lead with the left hand, while strikes lead with the right. 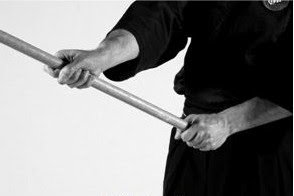 I used to think that this was a mere oddity. For a time I strenuously trained each technique equally with both hands. Or at least I tried to. No matter how hard I tried, the result was never satisfactory. Lately I’ve had a sort of epiphany: the right and left sides are not “unequal”. They are just different. Just as the left and right hemispheres of your brain have slightly different functions and perceive/approach the world in slightly different ways, so your left and right hands should follow suit.

With a predominantly 2-handed weapon like the jo, your hands need to work in concert. But they must be allowed to work in their natural way. You could spend your life trying to write well with your non-preferred hand, but it would produce uncertain (and pointless) results. I have a “leftie” friend who was forced to use his right hand as a child. His handwriting (with either hand) is a disaster, and he attributes this (probably with good reason) to the forced attempts to get him to write with his right hand.

“So,” I hear you ask, “where does this place left-handed jo users?” I suppose in the ideal world they would use the jo in the reverse to the “usual” manner. However because both hands are used equally (if differently) and because jo skills are not “intuitive” – they have to be learned over a lengthy period just as any fine motor skill – “lefties” don’t tend to experience any real difficulty in using the jo the “standard” way. That’s my experience anyway. And good thing too: it would be challenging, if not impossible, for left and right-handed students to train together using standard drills such as the kumijo. 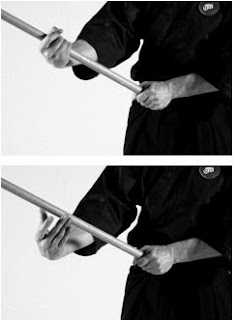 So I’m afraid that, as with students of the katana, left-handed jo users need to accept the “injustice” of living in a right-handed world!

Details of the striking grip

I mentioned above that the right hand grip for striking is very particular. You will note from the above picture that the hand is turned over – specifically it is turned over to the point that the base knuckle of your index finger rests on the jo. This means that when the force of the strike is transmitted through your knuckle and into your hand giving your jo a solid support base. At the same time the knuckle can act to steady your jo and “guide” it along the correct path. Conversely, an “under hand” grip provides none of that “guiding” and is, moreover, weak: on heavy impact your jo is liable to slip out of your hand.