November 04, 2011
You will recall that I recently answered a question from Dave T about the chamber of the ankle in the front kick.

Dave had a second question, which was as follows:

"I was once showed a front kick where the body is leaned forward towards the target. The kick is similar to the karate version except for the deliberate forward leaning motion of the body.
Some reasons for the forward leaning body:
1. Speed. The natural backward movement of the traditional front kick (due to the hip) slows the kick and telegraphs it.
2. Power. With the body in front, it supposedly adds more power to the kick due to the kicker’s bodyweight.
3. Balance. With the body in front towards the target, it helps the kicker keeps his balance especially if his kick is blocked or the opponent rushes forward during the kick.
4. Groin protection. With the body leaning forward, the groin is less exposed.
5. Lastly, related to point 3, with the bodyweight in front towards the target, it makes the kicker less vulnerable to a takedown. Also, if the kicker’s leg is grabbed, his body position allows him to strike/ grab the opponent.
Any opinions?" 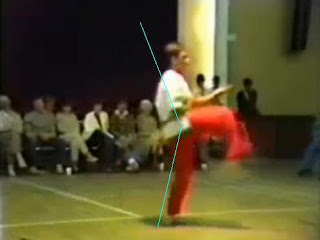 Many of the karate forms I know (eg. shisochin and kururunfa) feature a front kick where your body is moving forward as you kick. In such a committed kick, you might well think that the body is "leaning" into the kick.

The adjacent images shows my senior, Gordon Foulis, performing the kick in kururunfa. In the first one he is at the start of the kick. And he is clearly thrusting his hips into the kick - note that his hips are forward from his body. 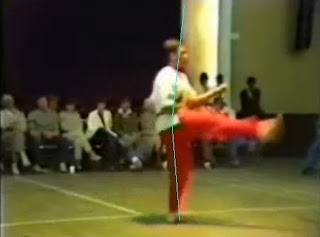 However you will see from the next image that as his kick reaches full extension, the forward movement of his body has caught up, making it appear as if he is leaning into the kick.

Done quickly, this kick can make it appear that the practitioner is leaning into the kick. But in fact the hip is always thrust into the target. And if the hip is being thrust, then the body must lag in accordance with the rules of staged activation of body parts.


My senior Gordon Foulis performing kururunfa at a festival in 1985

Needless to say, this only occurs when your kick is done in a manner so that you are committed to driving forward into your opponent after your kick. It is not appropriate for a more conservative kick where you want the option of retreating after kicking. In that case, your hips should noticeably push into your target as per the following video, in order to maximise the force of your kick:


A video showing the correct hip use in a front kick

I hope this answers your queries Dave!