In writing my preceding article "The ikkyo projection", I became aware of need to address the (rather basic) question: "How should one go about locking an opponent's elbow"?

Elbow locks are among the most common techniques in grappling - both in standup and ground fighting. Please note that in this article I'll be covering the type of elbow lock is commonly known as an "arm bar" - ie. a simple hyperextension of the elbow. I'll cover more elaborate twists of the elbow, eg. the "kimura" or "figure 4", another time.

Furthermore, in this article I don't propose to analyse ground fighting, at least to any great extent. My primary purpose here is to write an adjunct to my previous article which relates to controlling your opponent's elbow in standup fighting. However I think it goes without saying that the basic principles I cover here are equally applicable both in standup and ground fighting.

So what are the ways in which one can lock an elbow? I'll start with the weakest and move to the strongest.

Locking an elbow by a wrist twist 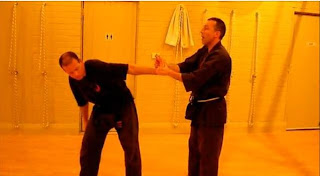 In theory, you can lock a person's elbow straight using only a twist of his or her the wrist. This can be achieved by pulling your opponent's arm straight and turning it over so that it is "elbow up". The important part to locking the elbow from the wrist comes next; a simultaneous twist and a bend to the wrist so that the fingers point towards the elbow (and are being turned anti-clockwise, as illustrated in the adjacent image).

But this is one of the most difficult small joint locks to effect.

As a matter of interest, the only way I have ever ended up in this sort of situation is when a preceding lock has fed into it (ie. where the line of least resistance / best escape makes your opponent pull his/her arm straight into this sort of "elbow locked from wrist" position"). At the Academy of Traditional Fighting Arts we have incorporated this principle into our sanseiru tuide lock flow drill as depicted below:

Locking an elbow with palm/hand assistance 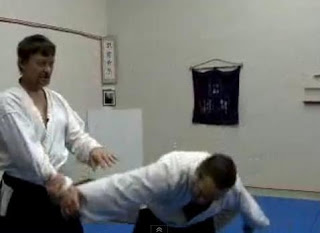 It's also possible to effect a elbow lock by pressing your palm into the "sweet spot" just above your elbow. Indeed, this is commonly done by many aikidoka.

What's wrong with this? Well, firstly it requires incredible precision with your hand; the small surface area of your palm (relative to, say, your forearm which can slide up or down to "capture" the "sweet spot") is very unforgiving of error. I can't tell you how many times I tried to apply an arm bar with my palm under the pressure of hard sparring, only to find my hand slipping/glancing off.

But the worst is yet to come. You see, most of the time, using your palm to effect an arm bar is simply too weak!

If you doubt me, try this simple exercise: have an uke grab your wrist. Then try to lever him or her into an arm bar using your arm, with the uke resisting the moment the arm bar is applied. The first thing you'll notice is that the uke will be pulling his or her arm back. You won't have a totally straight arm by the time you get your supporting hand/forearm into position behind the elbow. What you will have is an arm that is slightly bent – and is in the process of being bent even more! In other words, you have the task of reversing the momentum.

Now I doggedly preserved with the notion of using my palm/hand to apply pressure behind the elbow to straighten it. Somehow I always defaulted to using the forearm under pressure. Then after about 20 years of persistence the penny finally dropped. I wasn't "cheating" by using my forearm; it was the only realistic way to get sufficient force behind the technique!

Let me put it this way: In order to get the necessary force, you have to put your whole body into the technique. This means your body has to be "up close and personal". That is what grappling is all about. You can't grapple at arm's length. You have to be "hip to hip" (as the B52s used to say). On its own this factor is sufficient to make the "palm-assisted" elbow lock ineffective; the latter simply puts too much distance between you and your opponent.

Locking an elbow with forearm assistance 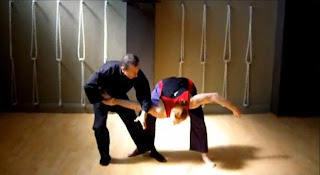 My next comment should come as no surprise; the most effective way to lock an elbow straight under pressure is to get up close and put your whole body into it – using a forearm to do so. It is not only powerful, but the larger surface area is more forgiving, allowing small last-moment corrections without the risk of slipping off.

I don't know why it took me so long to realise this, given that forearm-assisted arm bars are common place in taijiquan, baguazhang and xingyiquan – the "soft" or "internal" arts of China. Never once have I see an palm/hand used to assist elbow straightening. Ditto with the pragmatic external art of karate. I could show you literally thousands of examples and variations, but I'll settle for just one – our shisochin tuide lockflow which has a variety of forearm-assisted elbow locks:

Locking an elbow using your tricep or armpit ("wakki gatame")

Another alternative is to let your opponent's elbow slip under you armpit. In this case you lever against the elbow mostly using your tricep. This lock is called "wakki gatame".

It is slightly less forceful than the forearm press, but it is arguably more stable and secure.

Furthermore, it is possible to slip from a forearm-assisted elbow lock to the wakki gatame; there are even locks which straddle "in between" - see the video below at 0:15 where you can use the very top of your elbow to press down onto the "sweet spot" behind your opponent's elbow:


From our seiunchin tuide lock flow: note the pressure on the uke's elbow is exerted by the top of the defender's elbow, not his forearm or his tricep/armpit

Locking an elbow using your body ("juji gatame"), legs or other body part 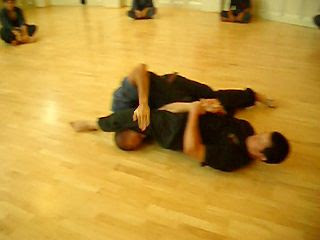 Elbow locks that utilise the body or legs constitute a massive topic all to itself - one that moves heavily into ground fighting strategy.

The primary technique to which I will refer is called "juji nage". Essentially it is performed by holding the elbow between your legs at your tanden/tantien (at the front of your hips) and levering your opponent's arm downwards (little finger towards your body) with both of your arms, while pushing upwards with your hips. In my experience this is by far the strongest, most secure elbow lock of all.

Variations on the theme include the "flying armbar", the "helicopter armbar" and "sankaku gatame". If you want a quick run-down take a look at the wikipedia entry on this subject.

In fact there are so many variations to each of the above elbow locks that it is almost impossible to list them.

While the juji gatame is "king" of the ground-based elbow locks, I hold it to be self-evident that the forearm-assisted version (followed closely by wakki gatame) is "king" of standup elbow locks.

At the very bottom of the practicality scale come the palm-assisted and wrist-twist elbow locks. Why? Because they require pinpoint precision and timing and are largely unforgiving of error. Although I know some practitioners who can pull them off, I wouldn't expect to do so against a resistant, determined and strong opponent. Accordingly I would advise against relying on them for civilian defence. However this is not to say that they won't ever be useful or that they should not be studied! After all, for many (most?) people today, martial arts is a lot more that just "civilian defence".