Machida vs. Bader: the naihanchi connection 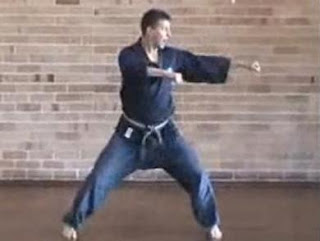 Here's a technique I somehow hadn't considered for the cage (although on reflection it is one of the civilian defence methods that is reasonably suited to that enviroment): the "double punch" from naihanchi/naifunchin/tekki.

It was in December 1986 and my brother and I were visiting our sensei in Durban, South Africa. One hot and sweaty morning, during one of the many intensive private trainings at his dojo, sensei asked my brother and me to consider the application of the naihanchi/naifunchin/tekki double punch technique - and report back to him in an hour or so. It was a kind of test.

Now the "double punch" is exactly that: a full sideways facing punch with one hand, the other a shorter "hook" punch (also executed sideways). Try as we might, we couldn't think of a rational reason for having 2 punches to the opponent - at such vastly different reaches. We thought it might be in case you missed with the first one or the second one... or perhaps you were aiming at two targets... or two opponents... Our sensei shook his head wearily. We'd failed the test.

"I want you to leave this dojo able to think for yourselves," he admonished. "This is especially important when the answer is so obvious. And it is obvious: the first is not a punch. It is a deflection that lets you enter into your opponent. The hook punch is the real punch."
"But that doesn't seem a very strong sort of punch."
"Oh it's strong enough."
He then proceeded to demonstrate the power of this punch on the makiwara.


Higaonna sensei (not my sensei) demonstrates a makiwara punch very similar to that shown to us that day. (I hasten to add that Higaonna sensei is in a league of his own when it comes to powerful punches - but our Sensei Bob was no slouch either!)

"But why wouldn't you simply do a rising block with your lead hand? Why do a punch if you're going to block?"
"That you can work out for yourselves. I've spoonfed you enough today. Try it and see. I'll give you a little clue: you're entering into your opponent - driving in."

It took me a while before I realised what he was saying. The lead hand could be a punch too. But if your opponent had closed the gap you could "blend" it into a deflection with very little effort, using the force of the punch to drive deep into your opponent. Combined with your opponent's own forward momentum, he would be primed to fall right into your hook punch at full speed. The fact that the lead punch misses actually creates a split second feeling that the danger has passed - when in fact it hasn't (the dangers of the old "dog hanging around the kitchen" as Sensei Bob used to say).

"But why does the kata aim the punch at the chest?"
"Because it is a neutral spot meaning it has a variety of targets - the head being one, the solar plexus being another... There are many targets you know - even on the face."
"Yes but should you be sideways? And why is there no body movement in this stance? Isn't it risky moving on the inside?"
"Enough questions! Train. And think. Think for yourself."

Of course I worked out the answers to all my questions over time. And in recent years I have used the same lesson for my own students. In fact, I filmed this very video to describe the naihanchi/naifunchin/tekki double punch a couple of years ago.


A video where I discuss the naihanchi/naifunchin/tekki double punch

Then just today, Lyoto Machida surprises us all again by appropriating this quintessential move from a quintessential karate kata into his MMA repetoire - this time against Ryan Bader. 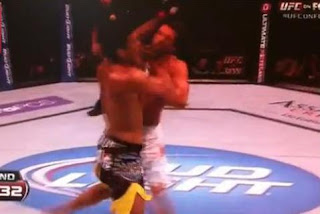 Not long into the second round, Machida waited for his opponent, Ryan Bader, to charge. Then Machida himself drove in. With the naihanchi/naifunchin/tekki double punch. On the inside. For an instant knockout.

That Machida should use this technique is hardly surprising. As a primarily goju man, this kata has always been on the sidelines of my practice; a remnant of the days when my own instructor was part of the JKA shotokan organisation (until they converted to goju in the late 60s). But for Machida, this kata (which is called "tekki" in shotokan) is a staple. It is to Shuri and Tomari te schools of karate what sanchin is to the Naha te schools of karate - the cornerstone.

I'm not suggesting by any means that Machida somehow thought: "I think I'll try that move from tekki shodan today". However if you've grooved the same movement hundreds of thousands of times, it can manifest reflexively. 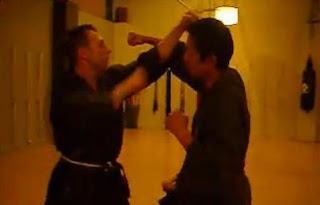 Yes, Machida might not be doing "pure karate" in the MMA cage. But it is quite gratifying (even surprising) to see traditional techniques show their effectiveness in such a spectacular way.

For all those who argued with me till they were blue in the face about the dangers of "moving to the inside", "turning sideways" and "not hitting with the lead hand", here a clear example why, sometimes, none of those are "issues". As I've just discussed, there is a time and place for every technique. Even the crane kick of the karate kid (mae tobi geri - it is actually a karate technique found in many kata). And even the double punch of naihanchi/naifunchin/tekki.

And don't get too caught up on how it "doesn't look exactly like the kata". Kata techniques are very formal. When applied they get the square edges rounded off. In my opinion this is more or less how this move of the kata was always intended to be applied.

If you haven't worked out why "moving on the inside" and all the other things aren't necessarily "always bad", then watch the fight again. If you can't work out why naihanchi/naifunchin/tekki doesn't feature any obvious footwork, have another look at the kata. And think.