October 31, 2012
My previous article got me thinking about another issue that runs to the core of good vs. bad teaching. I think it is best illustrated by giving you an example from my past:

When I was just 10 years old I moved to a new school in a new country. For the first time in my life I was subjected to a very rigorous discipline – smart uniforms, hair-length regulations, shined shoes and the threat of the cane if anything was amiss. In addition to this we had twice yearly sets of formal examinations and regular marked assignments in all the distinct subjects (namely two languages, mathematics, history, geography, science, as well as sundry subjects like art and woodwork).

For whatever reason, I thrived. Perhaps I was searching for some sort of structure that my previous "New Age" schools had not provided. Whatever the cause, it seemed that overnight I went from being the kid who had to repeat year 5 (and for whom "special schooling" had been suggested – I'm not kidding either) to being the top of my class in every subject.

For that first year things went very well. Then the following year our school employed a new woodwork teacher – Mr McIntosh – and everything started to go downhill again. In a big way.

Let me start by saying that Mr McIntosh was, at first glance, a genial old fellow: he presented as a neatly moustachioed working-class Englishman with a lilting Geordie/Border accent. He was passionate about carpentry and certainly knew his way around the workshop. And passion is certainly one of the most important ingredients in the makeup of any successful teacher.

But successful teacher he was not. In fact, he was an appalling teacher – perhaps the worst I've ever had. He should never have been left to teach anyone, never mind children. Well I suppose he might have cut the mustard with some 17-20 year old chippy apprentices who could have borne his poorly-conceived "educational methods" without too much scarring. But why anyone would ever have thought it prudent to give him a class of 11 year old boys is beyond me.

Today the only kind thing I can really say about him other than his enviable carpentry and general neatness/organisation is that his name, but for one letter, is like the famous Apple computer (he was a "Mc" not a "Mac"). The rest of his operating system was worse than a fragmented copy of Windows 95. 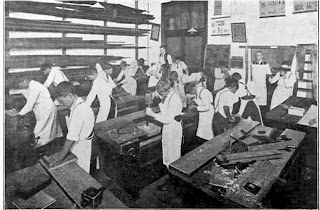 So what was so bad about Mr McIntosh? Essentially it was his insistence on making a rather "old-world" discipline (of which my school was rather fond, in principle anyway) the centrepiece of his teaching method. However instead of basing his practices on a 1960s English public school worldview (which the rest of the school had), he appeared to take his cue from one of Dickens' novels.

Forgotten your apron? That'll be 2 "tonks" (his euphemism for strokes from a cane, pronounced "taunks") to the "posterior". Didn't sweep up every wood shaving? That'll be 2 more tonks. Put your equipment away in the wrong order? One more tonk. Forgotten completely to put away your equipment? Well, that's serious now. "A right hazarrrd!" At least 2 tonks.

Okay, so how bad were these "tonks"? Let's put it this way: getting 4 didn't just cause bruising and blood blisters; it was sometimes bad enough to break the skin. Sometimes Mr McIntosh also had the "charming" idea of making the offender put his head under a bench (so when the cane struck, the offender would bang his head as he straightened up with pain). Sometimes (just to switch things around) he would use a metal ruler and "slice" downwards with the edge.

I never set out to be a "bad" student. In fact, I was revelling in my status as the "smart" kid for the first time in my life. I was also conscientious in every other respect. But I did suffer from something that plagues me to the present day; a chronic absent-mindedness. So inevitably I would realise, with mounting horror and only minutes before woodwork class, that I had forgotten to bring my apron to school. After receiving the obligatory tonks, I might forget a chisel on my workbench... In fact, the more nervous I became, the more accident-prone and absent-minded I seemed to be.

It rapidly became a bit of a "running joke": the woodwork class was practically guaranteed to include multiple tonks for yours truly. I began to feel physically ill before each class and eventually for the entire Tuesday leading up to our woodwork session. Afterwards it was commonplace for me (as well as the other boys who had been disciplined) to find it painful to sit for at least the rest of the day. My only comfort lay in commiserating with my best friend Harry, who also bore the brunt of Mr McIntosh's punishments in another class (he and I recently compared notes and reminisced about those days).

This continued for some months, making my school days a nightmare. Until one day my brother chanced to see me getting into the shower and noticed that I had been not only bruised deeply, but cut. I recall that on that particular day I had received a total of 4 cuts from Mr McIntosh. Considering that the statutory maximum allowed for school headmasters (and headmasters only!) was 6, this was really quite remarkable. Add to that my relatively young age and the (mostly trivial) misdeeds and it becomes even more remarkable. My brother went to my father and my father, enraged by what he saw, went straight to the school the very next morning.

The school was deeply apologetic but suggested to my father that we cut Mr McIntosh some slack. His wife was dying from cancer, after all.

So come next Tuesday, I went back to woodwork with some trepidation. Yet Mr McIntosh seemed to be in a particularly good mood, smiling broadly and telling jokes. As we lined up at our benches, he paused and said quietly: "Boys... Ye musn' tell on meh. I only give ye tonks – like this. Come here Danneh."

And he proceeded to give me two more tonks. Good old Mr McIntosh.

Later, as additional punishment, he made me tidy up the store room on my own. As I was busy with this he came in to talk. I recall that he sighed, sat down on a dusty wooden stool and observed me for a while beneath his peppercorn eyebrows, his similarly coloured moustache drawn down in a grimace of sadness. "Ah don' understand ye Danneh. Ye jes' won' listen will ye? Ye keep on makin' mistakes no matter wa' ah do to ye."

He let me go after extracting a promise that I would try harder in the future to pay attention.

As I exited the woodwork room into the adjacent gymansium, I spied him through the store room window, still seated on that stool, his eyes focussed wearily in the middle distance. At that moment I realised that he wasn't a frightening figure. He was a sad one. No doubt he was stressed by his wife's terminal illness. And no doubt he was totally out of his depth in the classroom. Because it occurred to me then and there, at the age of 11, that something was seriously amiss with his teaching system: If he couldn't "teach" me – a bright and conscientious student who thrived on structure and discipline – wasn't he doing something very wrong? Couldn't the proverbial "Blind Freddy" tell him that whatever he was doing just wasn't working? That the answer didn't lie in "upping the ante"? 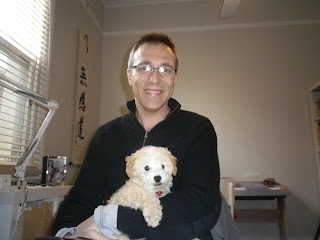 I never mentioned to my father those "extra" tonks I was given courtesy of "dobbing". And I successfully completed the year without warranting, never mind receiving, even one more. Ironically it was my realisation of Mr McIntosh's appalling failure as a teacher, role model – in fact as a human being – that made me more attentive before, during and after his class. For me, pity was a far more potent educator than fear.

Fast forward to the present day, and I see my puppy, Timmy, happily chewing away at my kung fu slipper despite having been scolded numerous times before for doing so. All I can do is smile. I know what Mr McIntosh would have done: raised the stakes continually until the poor dog was being whipped to within an inch of its life. Ye jes' won' listen, will ye Timmeh! So instead I reach for his pig's ear and gently substitute it for my slipper. Problem solved.

Teaching is always about positive reinforcement. The moment you have to resort to punishment (however necessarily), you know you're not "teaching" anything. At best, you're just playing catch-up. At worst, you're just losing your temper.