July 01, 2013
Most traditional martial arts of the Far East involve practice against a “wooden man” (“mu ren zhuang” or “muk yan jong”) – a dummy that serves as a kind of “striking target”.
﻿ ﻿﻿﻿
The earliest version of this “wooden man” was almost certainly just a tree or sapling, but ultimately it evolved into something with a striking surface that was a little more uniform (the bark of a tree can be a little unforgiving) and a little more convenient (finding the right tree is okay if you live near a a forest, but try finding one in a city!).

The other issue with trees is that they don’t tend to have much “give”; even a sapling is not that different to a brick wall when it comes to receiving the average punch or kick.  Hitting something with that much inertia can be quite unsatisfying (to say nothing of damaging to the body)!

Last, I remember how one day, when we were out in the woods kicking our favourite tree, we were told off by a park ranger.  He pointed out that if we weren’t careful we could “ringbark” the tree (ie. kick away the outer bark in a ring around the tree and kill it – since the tree relies on this thin layer to circulate water and nutrients).


I think that it was the search for something with both “give” and an even, consistent and suitable striking surface that lead the Okinawan karateka to develop the makiwara: the flexible punching post.  This is truly a remarkable invention that helps develop “kime” in punches.  It does so by encouraging the student to develop the right “shock” punch rather than a “pushing” one (pushing a “spring” like the makiwara is very unsatisfying – while hitting it with the right force gives you an immediate “snap” as feedback of a good, destructive punch!).  In this respect the makiwara is the antithesis to the heavy bag.

Recently my friend Ryan Parker asked on the Traditional Fighting Arts Forums whether there was any similar flexible striking post in China and I had to say that I couldn’t think of one.

So what does the more typical Chinese “wooden man” look like then?

Well there are certainly ones with "give": these are known as "live" dummies and the "give" typically results from some sort of spring mounting - usually because the body is mounted on wooden slats that flex in a way similar to the makiwara.

Others are "dead" dummies - ie. they have no "give" at all.  (I've read that the "live" dummies were introduced only fairly recently by people like Yip Man (of wing chun fame): the older Chinese wooden dummies were "dead".)


Leaving aside the issue of "spring"/"aliveness", the most distinguishing feature of the Chinese wooden dummy versus the Okinawan makiwara is this:

The Chinese version invariably has one or or more "arms".

It is this that warrants its description as a "wooden man" - not just a "striking post" (like the makiwara).

The earliest "Chinese wooden men" were almost certainly not "sprung".  Very likely they were just logs with a branch left attached to serve as an "arm".﻿
﻿﻿
As martial artists experimented, they found that the fixed position of the arm to be quite limiting, so a range of dummies was built to address this issue.

By inserting the arms and legs loosely as "pins", practitioners found these limbs had a bit of "give", creating a more forgiving striking surface that was also more useful and realistic in terms of resistance and feedback.  The addition of "spring mounting" added further "give" from Yip Man's time, onwards.

I believe the next innovation in "wooden man" design was to go one step further than the wing chun model and have one or more arms fitted as movable levers, either with a weight or some sort of spring to create resistance to the movement and/or return it to its original position.

A plethora of such "wooden men" can be seen in the Chinese (and related Okinawan!) arts and I have included a sample cross-section below: 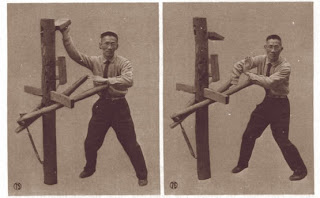 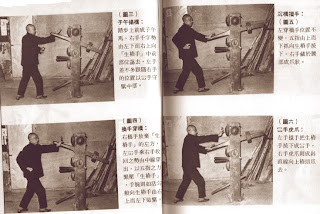 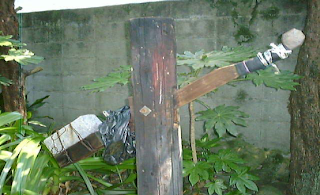 The  last of the above photographs actually depicts the wooden dummy used by Okinawan karate master Juhatsu Kyoda, founder of tou'on ryu and student of Kanryo Higaonna.

In Okinawa this type of dummy is called "kakete biki".  It is clear that the Chinese innovation of the moveable arm is something that spread to Okinawa along with certain techniques of southern quan fa that influenced the development of karate at around that time.

But all of this raises the question: why bother with a moveable arm?  In fact, why have arms on a striking post at all?

An arm on the wooden dummy allows the civilian defence practitioner to practise interceptions against it (eg. the deflections used in wing chun, as shown in the adjacent picture).

These interceptions can be fed into traps and other controls of your opponent's limbs as well.  Of course, the interceptions and subsequent controls can be (and usually are) accompanied by appropriate counter strikes.

So why have a moveable arm?  For the simple reason that it facilitates practising more sophisticated limb controls and attacks.  For example, it is all very well to have fixed limbs on your dummy if your controls amount to traps and other "pressure" holds - and nothing else.  But once you venture into techniques that move or manipulate the limb - eg. joint locks, particularly of the kind used in civilian defence grappling - your dummy needs to have moveable limbs, and preferably ones where that movement is subject to appropriate resistance.

If you're wondering how such practice might look, I encourage you to watch the following video from about 7:33 onwards.  It features gojuka Gary Lever who demonstrates (very impressively) kata bunkai using the lever arm.  You will instantly note that he uses the arm to simulate the interception of an attacking limb, then the application of controls and counters (including locks and other joint attacks).


Once again, you'll note that the criticism that "traditional 'blocks' are used in isolation" or that they "comprise a commercial break" is an absolute nonsense.  Every single interception shown by Gary is used as an entry to a control and counter; the dummy is meant to be hit, just as much as its "arm" is meant to be used for attaining and maintaining control over your opponent in the melee range.  The two tasks are inextricably linked.

Gary's own dummy is fitted with a flexible arm, however the function is really quite the same as that of the "lever-type" one (no pun is intended here!).  The advantage of Gary's flexible arm is that it permits a greater variety of application. I suspect its disadvantage is that it does not feature any real resistance.  Such is the reality of any form of "dummy" training: there is no "perfect wooden man"!

You'll also notice that, like many karateka, Gary has a makiwara right next to his "tou" (a term for bamboo striking targets sometimes applied to "wooden men") (see the adjacent image from another colleague of mine at the Traditional Fighting Arts Forums).  This is because the makiwara is still required as the primary tool for developing kime in strikes.

The wooden man is, by contrast, used in training "complete responses", by which I mean interceptions, traps, controls and other set-up techniques and, of course, counter attacks.  It doesn't have the "give" of the makiwara and is not optimal as a dedicated "striking target".  It is instead a more general civilian defence training tool.

In civilian defence, both attack and defence must be trained.  I've previously highlighted the importance of defensive skill, but only after noting that the ability to counter attack is a necessary prerequisite to effectiveness.

Accordingly, there should be room in every dojo/guan/kwoon/studio for both types of training tools: the dedicated striking target, and the "wooden man"; the tool for practising counter strikes in the context of interception.

For those who are interested, I have appended a video by Ryan Parker, describing how to make a kakete biki: