September 06, 2013
Many of my recent articles have concerned the topic of defence: why it is important, and how it is to be used - together with a connected, appropriate counter.

Well I recently came across an example of "textbook" defence: a response that typifies everything I've been writing about.

To some readers it might seem odd that it concerns firearms and not "hand to hand combat".  I don't find it odd at all: the principles of effective defence are universally applicable.  They are part of the Daoist concept of wu-wei. 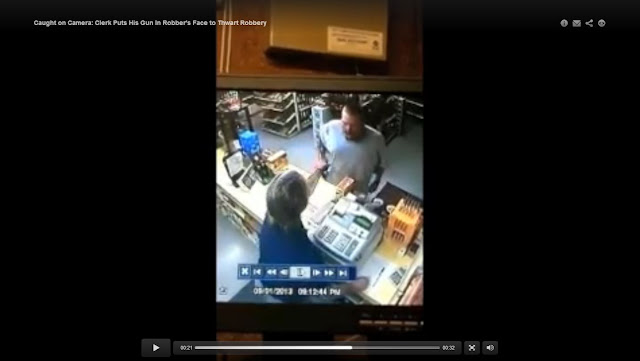 In it, you'll see a store clerk being held-up by a man armed with a handgun: only the robber doesn't realise he's up against a highly trained, combat-experienced Iraq war veteran.

It doesn't go well for the robber.  You can read a detailed textual account here.

What's the first thing you notice from the video?  Fantastic situational reflex by the veteran: As the robber starts to bring out his firearm, the veteran's hand goes out and jams it down to the robber's hip.  This reflex is clearly one he has developed through both training and combat experience.  Where most people would have stood there like stunned mullets, the veteran acted instantly.  This is not a testament to his "fast reaction timing": he is an older man and we can be sure from basic human biology that his reaction timing isn't what it was in his 20s or 30s.  Rather, this is a testament to a specific, productive reflex he developed - one that was situationally appropriate - indeed optimal.

That he was able to do so is a function of two things: effective motor learning (or, if you prefer, kinaesthesia/proprioception) and an ability (gained through relevant training/experience) to link this motor learning to non-verbal cues (ie. setting up the situational reflex).

What's the next thing you notice?  He started with defence.  Yes - all the "Ymar Sakar's" of this world (long-term readers will recall his "novellas" on this topic in my comments section), take note:

He didn't respond to the threat by pulling his gun out quicker than his attacker (and then shooting him).

He first intercepted the attack.  Then, he pulled out his own gun.

Because of the realities of reaction time.  Telling me you know how to "read cues" etc. is all very well: this veteran could read gun cues better than most of us - yet he was still forced into defence.  Why?  Because this is about the best you can expect.  It's the unavoidable element of surprise.

You can see that it's a bit like the instruction you always get on airplanes: put on your own oxygen mask before you attend to others.  In other words, ensure your safety first.  "Target focused" training totally ignores this vital aspect.  It assumes you are always going to "strike first" - and that somehow learning to "strike harder and better" is the most important thing.

That's a bit like saying that the best sort of training for this scenario is target shooting at a range.  No, it isn't.  Target shooting is important - but it won't do diddly squat in this situation unless you can first stop the gun being pointed at your head.

This is also where the "arming all civilians is the solution" argument is manifestly flawed: most civilians don't have any defence training - even if they have shooting range training.  They have learned to shoot things - not how to deal with or thwart someone who is trying to shoot them.

Okay, so what's the last thing you notice?  A proportionate response.  The veteran pulls his gun out after intercepting and thwarting his opponent's attack.  But he doesn't pull the trigger.  As he notes in his interview:

“If I had seen the actual barrel of the gun, I would have pulled the trigger,” he said. “My life wasn’t threatened.”

He did what was regrettably necessary - and no more.  He even let the man escape.  He certainly didn't try to be a hero and "restrain the attacker" or "teach him a lesson": he understood that you can't "swat all the mosquitoes at a barbecue".

How does this relate to unarmed fighting or fighting with non-firearm weapons?  In every way.  The principles are exactly the same - as you can see from my recent article where I discussed the high school bully video: you need to be able to stop that first attack.  This necessitates an ability to intercept attacks and negate them.

This is not a function of having "inadequate attack skills" or a philosophy of "standing around waiting for an attack".  It is simple logistical reality.  Nor does it manifest as some sort of "block without counter" tactic.  This is strawman nonsense, peddled by those who have never acquired defensive skill and doggedly refuse to consider doing so out of cognitive dissonance.  It is what you expect from ideologues and nutters (or slick salesmen peddling a "system" via a series of seminars, books and DVDs).

So your first priority in civilian defence is to negate the initial (usually surprise) attack.  It should be self-evident that after that initial attack, you can, and should, seize the initiative.  And it is only then that your "attack skills" become primarily relevant.  Before that, your defensive ones come first.

But remember: even after "seizing the initiative" you still need proportionality in your counter attacks.  Acknowledging this is not a sign of weakness or "pacifism".  It is just common sense.

The veteran in this video showed mastery of all of the above - in one quick exchange.  I have filled this page with words, and yet his video speaks many, many volumes.  To understand just how profound and eloquent these "volumes" are, you need to know how to read them. But more than that, you need to know not to read-in your own pre-set dogma.  I know that many in the "self defence industry" won't be able to resist the temptation to do the latter.  That's their loss.  Sadly, it's also their students'.

[An addendum: I encourage you t read the following excellent blog entry by R William Ayres: Real world self defense with guns.  It says a whole lot that I wish I'd said!]