October 31, 2013
In my recent article "The roundhouse kick and traditional martial arts" I wrote the following:


"So how does an art like karate treat the mawashi geri? What does it do to make the movement less "risky" and more "applicable" in civilian defence?  It makes the movement less of a "power" movement and more a conservative one. It throws the kick as a snap."

In the early days of debating with combat sports fans I lost count of the number of times that I heard this argument:

Well, as with the front snap kick, I knew it was only ever going to be a matter of time.  And now, in the space of one week, we've had two separate knockouts, both with the trademark karate mawashi geri keage (roundhouse kick using a snap).  The only difference between these and the kick usually taught in karate dojos is that the instep was used instead of the ball of foot (but then again, that has always been an option in traditional karate).

Of course, to many non-traditionalists these kicks seemed "crazy": as one fight fan put it: "That kick came at him like a short hook, but with leg power... Wow!"

To a traditional martial artist, particularly a karateka, there is nothing new here at all.  It's not "crazy".  It isn't some strange "short hook with 'leg power'".  It's just a snapping roundhouse kick.  It is easy to understand.  Not everything has to look good on the heavy bag in order to be effective.

The first fight in which the snap roundhouse made its appearance recently was Lyoto Machida's fight against Mark Munoz.  To watch the video go here, but the above gif should suffice.

[One thing to note is Machida's sportsmanship in not punching the blazes out of his downed opponent.  Okay, Munoz was a previous training partner of Machida's, but the latter's concern and respect are still exemplary.]

The second fight was that of Enrike Gogohia of Ukraine vs. Hicham Boubkari of Morocco.  Again the fight was over in seconds.  You can see the fight here, but once again, you can simply watch the adjacent animated gif and see all the relevant details.

In both instances you see just how effective the technique actually is; how little power it takes (relative to the swinging roundhouse to the thigh/body etc.); how safe it is relative to your telegraphing, time taken and, above all, recovery (you don't follow through and so, if you miss, you don't have to turn back - or turn around showing your back to your opponent); and finally how darn fast it is.

You'll also note that, despite the snap and retraction, the kick was powerful enough to sweep Boubkari pretty much off his feet.

And in both cases, the fighter who copped the kick was emphatically knocked out.

To be effective against the head, a technique simply doesn't require the masses of force you need to bend a heavy bag. In fact, it doesn't require much force even against the abdomen - particularly when effected with the ball of foot to the bladder, kidneys, liver, solar plexus, spleen etc. All you need is the right level of focus and shock.  By contrast, with a swinging roundhouse you're likely to throw too much force and over-commit, thereby losing your control of the situation.  In the ring, this can be a mistake.  In the street this can be fatal. 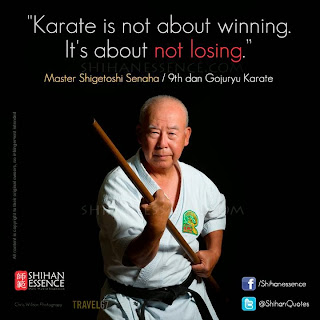 Civilian defence is about conservative tactics.  It is not about "winning", but about "not losing", as I've said many, many times before.

One more thing of note is that Munoz manages to get his guard up to "block" the kick.  But the guard is held simply too close to Munoz' head.  As I've said previously, with the right blow this sort of "block" is scarcely better than being hit directly.

It is particularly so with a snap technique, where the "shock" of the blow is the issue.  So long as the block is sufficiently near the face, the shock will be transmitted just the same as if it hit the face proper.  This is why there really shouldn't be any surprise as to the effectiveness of the blow and the ineffectiveness of the "block" (contrary to the commentator's surprise!).

By way of comparison, one of my own students fought in a tournament the other week and faced a snapping roundhouse kick to his head - yet intercepted (ie. "blocked") it most effectively.  The key is not to keep your hands so close to the head - it's that simple; you don't want the shock transmitted through your hand into your face.

So in the end, I'm happy to report that another much maligned, traditional technique is starting to surface in competition, just as I'd argued it would (once people developed the proper technique).  So much for all the keyboard ninjas and MMA watchers who engaged me in endless debates based on their own (very limited) exposure to fighting methods.

I'm certainly not above saying: "I told you so."  And certainly not when I had to put up with so much sneering and scoffing, along with "show me proof".  Here it is fellows - proof: the snap roundhouse works pretty darn well, don't you agree?  Yes, it might be news to you, but it's something we karateka have known for a long time (you only need to cop one in contact karate to understand).

If they didn't already, I am certain Munoz and Boubkari understand only too well what many of us karateka have, through direct experience, known to be true: a kick needn't bend a heavy bag in half in order to be effective for its purpose.

The mawashi geri keage might be the "weakest" kick in the karate arsenal - but this doesn't mean it isn't effective.  Far from it.