November 15, 2013
In my recent article  on zhan zhuang I referred to martial arts teachers who start "believing their own hype" and the tendency this has to make the teacher's students more prone to becoming complicit (usually unconsciously) in the process.

In my experience, you often (though by no means always) see "teacher chi" in schools that test "pushing".

Now I want to be clear that in general I think tests of "pushing" are fine: solid structure can give you a good foundation for developing a strong push.  If such tests are presented appropriately, I have no issue with them at all.  An example of an unobjectionable "pushing test" is the yiquan one below.

Nonetheless, I think that the data gained from such a "test of pushing" is of limited value.  Why?

The first thing you can find out is the strength of your partner's structure.  If your partner is standing inertly, non-resistant to your push, this is hardly useful data: you should already know what to expect from such a "test".

Second, you can find out how well you are able to displace people with a push.  If these are people who aren't trying to resist your push in any active sense (ie. pushing back, adopting a strong stance or simply slipping/brushing aside your push), then once again the data value is low; it will tell you nothing more than how well you can push an inert target.  It will just be a test of strength.  And if you want to test strength, you're better off examining your bench press scores than pushing around compliant partners...

In any event, as I discuss in my article on pushing, civilian defence is rarely about pushing people - it's more about damaging them so they can't damage you.  Sure, causing someone to fly across the room from a push is impressive (I'll get back to "impressiveness" in a moment).  And yes, sometimes civilian defense involves projecting your opponent (ie. removing him or her from your vicinity - whether by some sort of push, lever or redirection).


But more often than not, effective civilian defence involves very little displacement of your target.

This is consistent with most of the techniques of the internal (and external) martial arts: applications of forms very rarely feature "pushes" (I can think of only a few which might fall into this category).  Most of the time, traditional civilian counters involve some sort of percussion or restraint.  Any real "displacement" usually takes the form of a lever (eg. a single leg takedown) or throw (eg. over the hip) - not just a "shove".

The latter should come as no surprise: what "looks impressive" isn't necessarily what "does the job" in terms of civilian defence (see my article "Visible force vs. applied force").

Personally I find tests of resisting a push much more useful than tests of pushing.  As you will note from my previous article, I feel the most important thing one should be testing is the strength of one's own structure.

Consider my own "pushing" video below and note the difference in what is being tested:


But in the end, this isn't nearly as impressive as sending someone flying across the room into a padded wall, now is it?

So we come to my main concern with "tests of pushing": I am less concerned with the limitations of their "data value" than I am of their "impressiveness"; because it is precisely this "impressiveness" that creates a greater risk, for both teacher and student, of  falling prey to"teacher chi".  Who doesn't want to train in an art that looks "impressive"?  And who wants their revered teacher to look less than impressive?

This tendency is compounded by the fact that it is relatively easy for students to be allow themselves to be pushed (at least, much farther than they would otherwise, given the strength of the push).  By contrast, it is much harder for students to "fake" (consciously or subconsciously) a strong push.

Combine this with a natural  tendency for people to prioritise attack over defence and you can start to see how tempting it is to move to the "dark side"...

For example, consider the video below and compare it to the yiquan "test of pushing" demonstrated at the start of this article.  The two tests are very similar in concept.  However in the one below I think it's quite clear that an element of "teacher chi" has crept in...

I note that the mere fact of adding the padded wall is a strong "mentalist" device, compelling greater subconscious cooperation by the student: if you expect to be pushed hard enough to hit the padding with some force, there is a greater chance you will let this happen.

If the wall was unpadded (or, perhaps, was covered in spikes), think we'd be seeing a very different result.  As it is, the padding serves as part of the autosuggestion: "Fall this way." 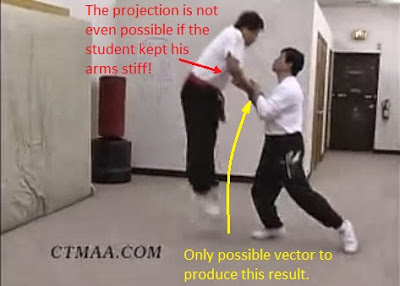 A dead giveaway of cooperation in this "test" is when the student jumps upwards, particularly when the angle of the push on the arms could not actually generate a moment at that angle.

It shows the student is trying (consciously or subconsciously) to aid the push by using his leg muscles.  The problem is, it is hard to get a "lift-off" with a backward moment; instead the student's body does a "jackknife" upwards, with the student's body initially leaning forwards into the push (rather than away, as you might expect).

This is clearly the result of a "spring" from the student's legs rather than a push to the student at the chest level.

Such a ploy might be fine for staging a "photo opportunity" (who wants a boring picture?) but it scarcely represents a true "test" of "pushing power" (in this case "fajin" - an explosive force using a short movement).

Once you have gone to this level of "teacher chi" I think it is a small step to go the "whole 9 yards" to get to the utter parody below: 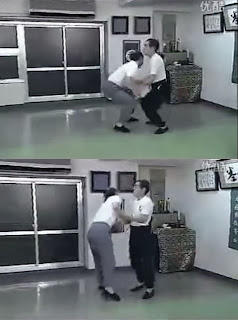 For me, the moment that is the funniest (and saddest) is when both the teacher and student start to "jackknife" together in sympathy at around 2:16.

What follows is something reminiscent of a very ugly folk dance, where one partner continues bouncing around as if possessed by the ghost of basketball.

This tendency is, sadly, quite common in such "chi demonstrations".  If you see such bouncing, you know it can't possibly emanate from the purported "chi master".

So what happens when someone who has started to believe their own hype is finally resisted - even moderately?  We've probably all seen the poor "kiai master" copping a smack from the MMA figher, but let's look at a more modest example (and, for a change, a female "chi master"):


You'll see that towards the end, when facing fairly light resistance, she manages push the participants, but only in the order of a foot or so (which is what you might expect of someone being shoved).  All of the mystical "chi power" has vanished.  In its place there is a fairly honest reflection of Newtonian physics.

Addendum: I made this animated gif to show just obvious a "fake push" is when you analyse the elements.  Note how the student bends his legs to spring upwards.

Some have argued that this is possible to achieve with a push.  On the arms?  Really?  You could only do so if they were locked at the elbows and shoulders, which is not possible at this angle.  And even if you could, why would you bother?

In the end though, one need only look at the obvious: the student is springing up at the knees before the push even starts...