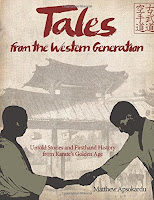 How pleased was I to receive an advance copy of  Matthew Apsokardu's Tales from the Western Generation: Untold Stories and Firsthand History from Karate's Golden Age?!

Many of you will be familiar with the author through his groundbreaking blog, Ikigai Way.  I can tell you right off the bat that this blog is one of the main inspirations for my own (although I hasten to add that I have never sought to cover the same ground that Matt has!).

With his book, Matt has done what no one before him has managed to do, and that is fill the gaping void of historical accounts provided  by pioneering Western karateka.  Almost every karate book I've read has accounts from Japanese masters, but those in the West somehow seem forgotten.  Even after 70 years of karate in countries like the United States and those in Europe, karate history inevitably focuses on first hand accounts from Okinawa and the Japanese mainland. 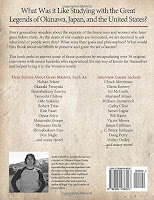 Finally, someone (the very capable and thorough Matt Apsokardu) has rectified this omission with his fascinating and long-overdue book, which covers interviews by some of the legends of Goju, Shuri, Isshin, Chito and Shorin Ryu, as well as Shotokan, Matsumura Seito and Shorinkan.

These interviews, conducted with such famous martial artists as Chuck Merriman, Ed McGrath, Cathy Cline, Bill Hayes and Doug Perry, among many others, reveal their insights and stories, both about karate in the West and the oral traditions inherited from their dojos in Okinawa/Japan.

I believe the book is about to be launched and so it is my pleasure to recommend it to all as a "must-read" for any serious karateka!