Book review: The Fighter Within by Chris Olech 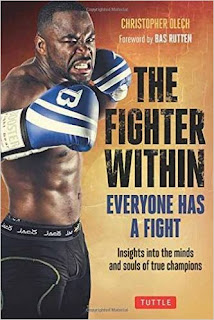 I must confess that I approach book reviews with some trepidation nowadays.  I get asked to it very often and I really hate giving bad reviews - it's not my thing.  If you scroll through Youtube you won't find me dropping negative comments on people's honest performances of forms, kata or sparring etc.  I just don't see the point in being mean.  Nor do I think it is "constructive" to tell people when I think where they are going "wrong". (I might draw the line at something fraudulent or harmful, but that is a different story.)

Similarly I get concerned about reviewing books because I'm not sure what to do when faced with a stinker: do I lie and say something "nice" (perhaps damning with faint praise) or am I honest?

With Chris Olech's new book "The Fighter Within: Everyone Has a Fight" I had no such concerns.  As a fight journalist with practical ring experience, Chris brings both professionalism and authenticity to this inside view of the modern fight game.

Along with is own hard-knocks experience, Chris gives us deeply insightful interviews with such luminaries as Fedor Emelianenko, Rashad Evans and Rich Franklin, just to name a few.  In so doing he succeeds in doing what few (if any?) have ever managed to do: bring the daily, grinding life of the modern sports fighter to the average reader.

Chris' book is simultaneously absorbing and compelling, largely due to his first-class writing style.  Ultimately it is, however, also uplifting because it is, at the end of the day, about triumph.  And I'm not talking about winning or losing a match: I'm talking about something bigger.  Because the greatest battles of all are the one we wage against ourselves.  And these are battles that each of the interview subjects has waged - and won - repeatedly.

So for all those who are interested in the fight game but who would never consider entering it, Chris' book offers a fascinating vicarious experience of what it means to be an MMA fighter.

Far from the glamorous belts, interviews, endorsements and hype there is that daily grind: the aching muscles, the lungs that feel they could "pop", the injuries, the heartache and depression of overcoming a defeat or setback of some other kind... These are all things that constitute the reality of the MMA fighter.  How he or she deals with this reality is what actually determines the "fighter within".  And it is in detailing this process that Chris' book overcomes the crass fixation with personality and scandal, or the hyper-detailed technical analyses of fight styles, that often typify most MMA books.

So Chris Olech has done more than produce a mish-mash of interviews with famous fighters.  He has given us a very rarely seen window into the life of the professional fighter - the clearest, most fascinating yet.  If you are an MMA fan - or indeed a fan of any combat sport - you should greedily consume Chris's new book.  Rarely does fight journalism come in such a eloquent, compelling, eye-opening, first-hand form.

I unreservedly give it 5 stars.