How often do you practice forms with a sharpened blade vs training weapon, do you see extra benefit from using the live blade?﻿ 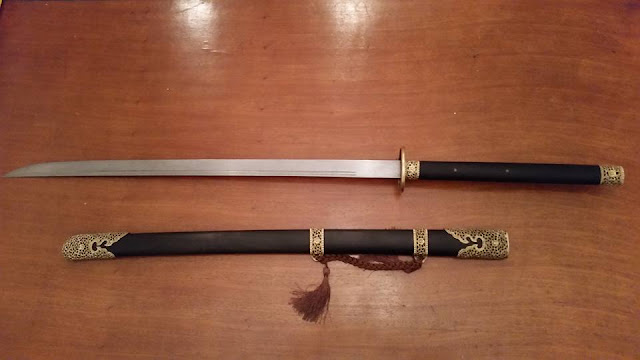 My answer was as follows:

I actually practise almost entirely with a live blade - at least on forms with which I am sufficiently familiar (I tend to start with a blunt weapon first - until I feel I know it well enough to move to the next level). I wouldn't recommend it however to beginners or to anyone who isn't interested in martial application but just wants to do forms for the sake of the art form.

What are the benefits? For starters, you are wielding a real weapon, with proper weighting (not some wooden "equivalent" or some flimsy wushu blade etc.). You realise a whole lot about where you need to improve when you start working with a real sword. You also realise how much conditioning you lack (not just in your wrists/forearms but also in the rest of your body - your back, your shoulders etc.).

Second, the live blade teaches you to be very respectful of your weapon. It ceases being a mere "stick" but becomes the deadly instrument that it is. Your mind focuses far, far more sharply. In Zen terms, you are "in the moment" - precisely because you have to be: one wrong move could be very injurious. You stop being flippant and overly casual and start to realise that for at least half the time you were training with your wooden etc. substitute you were actually risking cutting your thigh, lopping off an earlobe or at the very least slicing your fingers or hands. So not only do you learn correct placement of hands and other body parts while using the sword, you also sharpen your mental focus.

Third, the live blade (or at least a metal one) teaches you correct blade alignment and cutting/thrusting technique like nothing else can. For example, most people do figure 8 movements in the air with a wooden sword, not realising that they are actually striking with the back or side of the "blade" - or at the very least, having rather poor alignment.

In conclusion, combined with application analysis, partner drills and sparring (where form techniques are applied), practising your forms with a live blade (and then testing the techniques from the forms while cutting tatami or other objects) allows your forms to "come to life" and be more than a mere "dance".

I hope this answers your question satisfactorily.


Xin practising a Chinese longsword form with a live blade (sharp enough to slice your fingers off!)