The issue of "martial arts and character" seems to be a fairly hot topic on the web: certain sites can show you any number of examples of so-called top instructors who don't have any semblance of ethics, morals etc. It is described as one of the big "myths" of martial arts and there are no shortage of people wanted to fulfil the role of "myth buster" in this regard.

However is there even an argument?

Clearly some instructors feel that training with an instructor who adheres to a given ethos/philosophy can have an impact on a student.

There is also the feeling that prolonged, strenuous, challenging and disciplined training in the martial arts can give you insights into your character, human nature and the nature of conflict. That's not the same as saying that you WILL have such insights or that even if you do, you WILL change your behaviour in accordance with those insights.

Rather, insights in training, gained under the tutelage of an influential instructor who strongly adheres to a particular ethos or philosophy, MIGHT lead you to reflect that ethos and arguably become a "better person" (ie. in a "moral" sense as viewed in your society etc. - all these terms are subjective and changeable, but I think you understand what I mean).

However the idea that you WILL become such a "better person" simply through physical martial arts practise is so obviously without foundation that it scarcely warrants attention at all. In almost 3 decades of involvement in the traditional martial arts I have never met anyone who has advocated such a position. Usually their own organisations are so riddled with internal political strife that ongoing human frailty is obvious for all to see.

Accordingly I am strongly of the opinion that the issue is nothing but a straw man. There is no real "myth" to bust (except perhaps with some cultists etc. - whose ridiculous views probably don't warrant "debunking" anyway).

Put another way, the vast majority of people practising traditional martial arts might well be aware of the particular ethos or philosophy of their school/art, but they are not under any illusion that they will somehow magically "absorb" and manifest that ethos just through physically performing certain moves. Most of us are also smart enough to see our "grandmasters" as ordinary human beings with the usual human frailties. If we don't see it straight way, we see it soon enough. Most of us aren't waiting for some helpful "myth-debunker" to come along "to set things straight" in this regard. 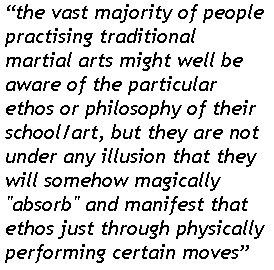 "Ethics" or "values" are specific to certain philosophies and religions or cultures. Certainly there are particular ethical principles or values ("there is no first strike in karate") associated with traditional martial arts. As I noted above, these are more than likely derived from Zen Buddhism and Daoism (again, see "Buddhism, Daoism and the martial arts").

"Moral" behaviour depends on how these ethics are effected in today's society. We would probably agree that someone who uses karate "for self defence only" is acting "morally" within the prevailing Western standards of behaviour.

"Character building" is a process by which you adopt certain ethics which in turn translate into moral behaviour.

As I have said, in my experience, few, if any, traditional martial artists buy into the myth that "martial arts builds character". Rather:

2. They think that if one abides by those ethics one will exhibit what is generally regarded as "moral" behaviour.

3. They feel that if they can learn to exhibit that "moral" behaviour they will have "built character".

All this is very different from the "myth" referred to above.

When people put "character building" on brochures and advertisments they are ostensibly using short-hand for the above. They are assuring the public that the particular dojo teaches adherence to those values/ethics (teaching fighting can, after all, be a shady business).

Assuming the dojo actually teaches adherence to traditional ethics, whether a student adopts those values/ethics and hence "builds" character depends entirely on the student. And I don't know anyone who thinks otherwise.

When I first wrote this article I forgot to make one more important point, and that is the use of the martial arts as a personal tool for character building. While many might lampoon this, it is something to which I subscribe. Training in the martial arts has coincided with / augmented my endeavour to build my own character. In teaching the martial arts I have endeavoured to help others in this task. Regardless of my success or failure in either, I strongly adhere to the traditional principles underlying "budo" - the martial way. It is worth noting that the character for "bu" or "martial" ("wu" in Chinese) comprises 2 distinct elements -

1. a bladed weapon such as a sword; and

2. the injunction "never to be drawn".

That learning the art of fighting for the purposes of peace is a paradox has never troubled me. In order to manage violence and conflict you need to understand these facets of human nature first - not only by examining others but by looking into yourself. Martial arts training is ideally suited for this purpose. Again, the fact that someone else doesn't use martial arts for this purpose is neither here nor there as far as I'm concerned.