The backfist in karate and the southern Chinese martial systems

I recall many years ago discussing karate and its Chinese cousins with Martin Watts of Yongchun baihe (white crane) fame. Martin surprised me when he mentioned "karate and its infernal backfists". When I queried what he meant, he pointed out that white crane and related Chinese systems did not have any backfist techniques.

Presumably this is because the southern Chinese martial artists don't feel the backfist is particularly useful. 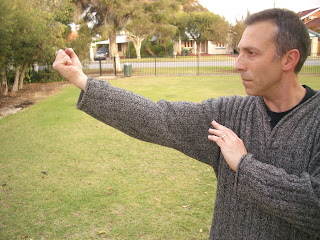 Indeed the backfist is relatively rare in the southern Chinese martial arts - a fact that had escaped my attention until that point. Yet it appears quite frequently in karate. In goju ryu alone it occurs in the kata gekisai dai ichi and ni, saifa, seiyunchin and seipai. It is used in most versions of naifanchi/naifuanchin/tekki - the "cornerstone" kata of the shorin tradition. Outside kata, the uraken is regarded as a staple kihon (basic technique).

The relative lack of "power" in the uraken

The uraken is not without its critics even in karate. Many will point out its relative lack of power and the fact that other, more powerful, techniques can often be substituted. Consider one of my correspondents, Edward, who said recently:

"I've heard a proposition that uraken as presented in katas is actually a disguised tetsui. The rationale is that uraken aimes at targets that are difficult to reach in real combat and even if you manage to make it right the effect would be very questionable. Besides that, classic uraken proposes a bone-to-bone collision which is risky in terms of inflicting injuries to oneself. With that in mind, tetsui seems to be much more logical option. Basically, karate was designed for a rough combat which requires a rough techniqes. An example of it is MMA competition where nobody uses uraken but they do effectivelly use tetsui in ground-and-pound situations."

Edward isn't the first to notice that uraken isn't favoured by combats sports practitioners. I recall reading an interview with Benny "The Jet" Urquidez - undefeated kickboxing champion - where he apparently tried a backfist on an opponent in the street. From memory, he said his backfist succeeded in doing little more than raising a welt on his opponent's forehead - and enraging him - prompting Benny to resort to other, more effective strikes.

Despite these perceived shortcomings, most karateka doggedly hold on to their urakens and will not replace them with hammer fists and other substitutes. Is this persistence a function of mere tradition, or is there some other, practical, reason for preserving this technique?

In order to answer this question I think we need to first examine how the uraken is intended to work:

The old "ball and chain"

Something Edward said resonated with me and is worth repeating here. This is how he described the uraken:

"[T]he hand resembles a whip or a chain with a ball at the end of it."

Where some will try to analogize many karate techniques along this line, I think the uraken is one of the only true "whip-like" techniques in karate (the hiraken or "leopard paw" of seipai and the front snap kick being other examples).

I have previously mentioned that, in order to work, techniques require something I call "staged activation". This is the process where the movement is initiated with the larger joints and then progressively moves through the smaller joints to the extremities. This is particularly true of "whipping" techniques like the uraken, in which case the shoulder moves first, then the elbow, then the wrist.

With any whipping action the last movement is arguably the most significant: without it the entire action is negated. An uncoiling whip comes to very little if the last yard or so doesn't uncoil. So it is with the uraken. The wrist action is pivotal.

In my article "Clenched fists and stiff arms" I discuss how keeping a clenched fist need not stiffen your wrist. I also discuss how many karateka today seem to be unaware of this and adopt myriad ways of avoiding what is really a basic and necessary kinaesthetic principle. In much the same way as they don't clench their fists for punches, they don't do their urakens properly.

To work efficiently, urakens must be performed with a tight fist, but a loose wrist.

An inability to have a loose wrist with a tight fist results in a "stiff arm uraken" which is practically useless. In those circumstances it is no small wonder that many have come to regard the uraken as a worthless fighting technique. It is my guess that many of those who say this probably lack the basic kinaesthetic skill required to effect a correct uraken. And even when they can effect a whip, it is truncated due to a restricted movement in the wrist.

But the failure to use "staged activation" is just one reason that there is less force transferred by a "truncated" uraken. The other reason is that you have less room in which to accelerate your strike. Put simply, a correct, whip-like uraken has more travel, hence more room to accelerate, hence it imparts more force.

The striking surface of the uraken

The uraken - note the wrist movement at the very end, bringing the 2 big knuckles into play

This will probably surprise many readers as it is contrary to "conventional knowledge". But if you think about it, it makes perfect sense: the back of your hand is not a particularly strong or resilient striking surface. The knuckles can take a lot of pressure from the front, but from behind they are comparatively vulnerable. Furthermore the back of your hand features tendons and other connective tissue that is quite intricate and delicate.

I discuss the striking surface of the uraken

Others substitute a rising inverted punch for the uraken - something I'll touch on in another article.

But it is my view that the answer is a lot simpler: a proper wrist flick will not only let you utlise a fuller ranger of motion - it will also bring into play your big knuckles, almost as if you were punching.

But the uraken still isn't powerful!

Even when you do the uraken as I've described, it is fair to say that it is not a "power" technique: that is to say, it does not transfer as much momentum (and accordingly does not apply as much force) as other blows, such as the hammer fist.


A more general discussion about the uraken

However, it is unwise to disregard techniques simply on the basis of "power" as this is only one basis upon which "usefulness" can be determined. The uraken might not be "powerful" but it comes into its own as a shock technique. It springs out of nowhere, generating an impressive amount of force with relatively little movement.

So why don't they use it in combat sports?

Very simply, uraken relies on a cutting action that requires a hard striking surface - the knuckles. Even the thinnest/lightest combat sports gloves neuter this cutting action. So I'm not at all surprised that it does not appear in combat sports. I also doubt many of the modern MMA players are versed in the subtleties of the "whip-like", "tight fist, loose wrist" kinaesthetics required to make it work. As with many other traditional techniques it has been severely diluted over time through misunderstanding and copy error.

Furthermore, you have to bear in mind that what is potentially useful in a civilian defence scenario might not be useful in combat sports. For example, while you might want to effect a "shock" blow to your opponent in the street so as to facilitate an escape, it is pointless to do so in the ring. Rather you want to utilise "power" blows to effect a knock-out.

Finally, it is important to note that even in karate kata, the uraken is never used as a finishing technique. It tends to be used as a set-up to "greater things".

The uraken is not a "poor man's hammer fist". It is not a forearm strike
in disguise. And it is not a misunderstood inverted punch. It is a whip-like weapon that utlises your front knuckles (and less frequently, the back of the knuckles) in a cutting action to shock your opponent - either to set-up another technique or to facilitate an escape.

So the uraken might not be a "power" technique, but it is still a useful addition to a civilian defence armoury. However, you have to do it "right" to make it work.