In my previous post I referred to an episode of Penn's and Teller's television show in which they concluded that "martial arts are bullshit". In that post I mention the comments of Marc MacYoung to the effect that we martial artists should not "wilfully ignore" that which is flagrant nonsense but which passes (in some quarters anyway) for effective martial arts.

I normally don't do this kind of thing, but I though I'd highlight some examples of such nonsense - partly to deflect any suggestion that I am "wilfully ignoring" bad martial arts, but principally to distinguish martial arts that are not imbued with such nonsense.

Consider the video below (click on the picture to view). 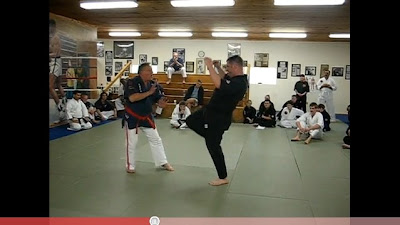 It is my view that this sort of parlour trick is precisely the sort of thing that gives martial arts a bad name. Dillman uses a highly compliant student (who is completely out of range anyway) to effect "magic"; he stops the student's kick with a kiai (shout). This is nothing short of poor theater. If he were facing me, he could kiai for a month of Sundays and I would still land my kick. The only thing that would stop me is human decency (we could test it with Dillman holding a kick shield however).

Dillman initially made a name for himself by teaching "dim mak" or "pressure points" (known as "kyusho" in Japanese arts). There is something (not a whole lot, but something) to pressure points, just as there is something to kiais. Pressure points and kiais are a useful and important part of any martial arts arsenal, but I certainly wouldn't try to base an entire fighting method on either.

Where Dillman has completely lost me (and many others) is his more recent foray into "no touch knockouts". And that is blatant baloney - the "voodoo of the 20th century". We should be past such superstition, particularly when it can be (and often has been) so easily demonstrated to be total and unmitigated nonsense. If it did work, we'd have to throw out every physics textbook ever written and start again. Except it doesn't work.


A sceptic demonstrates how the "no touch knockout" just doesn't (and cannot) work.

So why take your martial arts in such a direction? Is it a commercial tactic? Or do people like Dillman really believe in something so blatantly silly? And, if you are a 10th degree black belt in karate, why would you resort to marketing such "supernatural" techniques?

I don't suppose we'll ever know the answers to those questions. However, a clue might be found by examining the "non-supernatural" techniques of people who make outlandish claims.

A person who has made a big (and notorious) name for himself in the martial arts is Radford W Davis, aka "Ashida Kim". One of the first people to publish books on ninjutsu (in the 80s), he has made all sorts of outlandish and downright ridiculous claims about himself and his abilities.

But is Mr Davis all bad? Could it be that he actually "knows stuff" - or is Phil Elmore correct that Davis has somehow managed to see 3 decades in the martial arts without actually "getting good at it"?

The answer to that question should be immediately apparent to any genuinely experienced martial arts teacher. Not only is Davis' technique floppy and lacking in any kind of focus (kime) or finish, it is also incorrect in respect of many crucial details. Consider Davis teaching the age uke or rising block in the video below:

What should be immediately apparent to an experienced martial artist, apart from the sloppy delivery, the incorrect distancing from his forehead, the incorrect turn in his forearm etc., is that he is only doing half the movement. Davis is clearly completely oblivious to what I have called the "secondary" part of the age uke - a back up movement that is part of the block (see my article "Two for the price of one: more about karate "blocks"" and the video below).

If I were to assess Davis' performance and decide what level of experience he had in the martial arts, I would assume that he might have passed one, at most 2, gradings in traditional karate. This equates to about 6 months of karate training. And it is karate - there is no mistaking his technique as poor karate (as opposed to good ninjutsu). If further proof is needed, one need only look at his kata performances on the net: they are clearly karate (specifically shotokan) forms.

So is Davis the inheritor of a secret ninja system? No. His marital arts experience (judging by his techniques on Youtube) appears to consist of a very brief study of shotokan karate, possibly as a child or teenager.

But as I have said elsewhere, it seems highly unlikely that anyone sensible is going to be fooled by the likes of Davis. He has received far more attention than he deserves and I really shouldn't be adding to it.

Which brings me back to Dillman. He does command some respect and status in the martial arts world. Is he much better than Davis? Surely his "non-supernatural" techniques, at least, comprise solid, straightforward, functional karate?

Unfortunately, in my opinion the answer to that is (at least in part): "No."

Consider the video below of Dillman performing the karate kata "sanchin" - a cornerstone of Naha te karate (click on the picture to view). 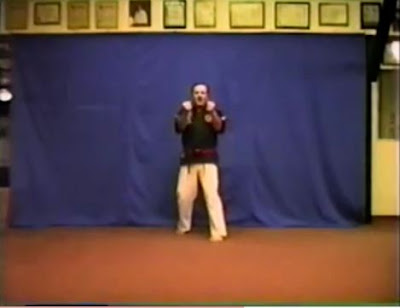 I've used this kata to illustrate my point, but you can examine any of his forms online and see similar fundamental issues to the ones I'm about to highlight. 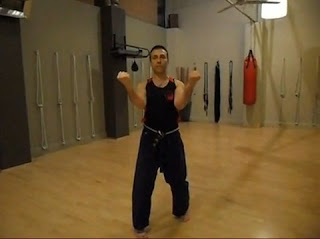 It would take all day to list the basic biomechanical problems I see in the techniques of his forms, so I'll confine myself to just one example in his sanchin kata, and that is this: Look at his "morote chudan uke" (double chest deflection) depicted in the above still taken from his kata.

The first problem is that he doesn't effect a morote chudan uke at all. He just places his arms into the finishing position.

And the "finishing position" in his case contravenes the basic concept of having your elbows about a fist distance from your floating rib, with your arms angled slightly outwards (as illustrated by me in the image to the above right).

The chudan uke: sanchin kata features a double chudan uke at the start

This is not only the finishing position of an efficient chudan deflection (of which sanchin uses a double movement and which is entirely absent in Dillman's version), but it is also important to create I have called the "Clayton's gap" which gives the impression to your opponent that you are open to a leading straight jab when in fact you are covered against this. [See my latest article "More on the "Clayton's gap"" for a detailed analysis of this issue.] These little subtleties are very important. They make the difference between being hit and a near miss. And a near miss is as good as a mile.

Dillman's kata show no awareness of details such as this. And there are hundreds of such issues in each of his movements, both in this sanchin kata performance and in others. This prompts me to conclude that his knowledge of karate is either extremely diluted or just plain lacking. And this is why I can compare him to Radford Davis. Yes, he is clearly nowhere near as "junior" in terms of his karate experience, but there are glaring gaps in knowledge.

I am strongly of the view that it is these little details that make karate work. Perhaps it is to make up for the lack of this detailed (and necessary) knowledge, that Dillman has strayed into "magic". Who knows?

Penn and Teller would have a field day with Dillman and Davis - and rightfully so. They, and others like them, are the ones who give a bad name to karate, traditional martial arts and martial arts in general.

So what to do? Should I write all my blog articles "exposing" techniques that don't work and those who promote such techniques?

I think I'll follow my friend Quint's advice and continue to use this blog "to promote and expose the positive and the benefits" in and of the martial arts, at least as I see them. But I suppose that won't stop me from making the odd criticism here or there...