Some years ago I was surfing a particular online forum when I came across a "bullshit martial arts" thread in which the basic karate "soto uke" (outside block) was lampooned.

The essence of the thread was that here was a technique that could never be used in "real fighting". In other words, it was held up as the archetypal "karate fail" - a classic example of why karate "doesn't work in the street".

I agree that soto uke is "archetypal" of karate. It is arguably the cornerstone of karate forearm deflection. However I disagree completely with the assessment that it is a "fail". Rather, I think it is one of karate's most applicable and useful techniques, eminently suited to the task of civilian defence.

What I mean by soto uke

Readers of my blog will be familiar with my use of the term "block" to encompass deflections, interceptions and parries as well as literal "blocks". The term "uke" in Japanese comes from "ukeru" - to receive. It is my view that traditional "blocks" (uke) in karate are usually anything but "hard stopping" actions. However, through force of habit I still use the term "block". You will also note from my article "Why blocks DO work" that I think traditional blocks are an essential part of the civilian defence arsenal.

Given that I have referred to shotokan karate, it is fitting that I reference that style in my discussion of soto uke. It might not be this very video that was being lampooned in the thread I mentioned at the start of this article, but it might as well have been. The performance below attracts all the criticisms that are levelled at soto uke - as well as some others I would add! 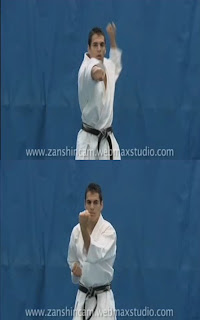 Ignoring for a moment the peculiarities of this particular performance, specifically the extraneous body movement (the rising and falling of the shoulders/body, the opening and closing of the mouth, etc.), the technique is essentially sound. It is a reasonable manifestation of the basic soto uke. I emphasise the word "basic" for a reason. This is what is known in karate as "kihon". It is a basic drill. More on that in a moment.

What critics inevitably point out is that the "blocking" arm is thrown out to the side (in the case of the adjacent image - to the rear!) before it is brought into play as a block/deflection. "I'd just punch you if you did that." Indeed.

Missing the point: what the soto uke is for

What critics of soto uke don't understand is that soto uke - in its basic form - is a drill. It is not designed to be applied in this literal way.

What is this "drill" for then? Quite simply, it teaches you the correct angle of interception when using the outside of the forearm to deflect an attack inward. In order to learn that correct angle, you need to put your forearm in a position where you can move it along the plane of that angle. And for practice sake, it is best to exercise the full length of the plane rather than just a small portion. In application you will probably end up with a very small movement. But in order for that movement to be on the correct plane, you need to explore the full length of that plane.

I'll pause here to point out that discerning a particular plane of movement is very difficult when you are only given a very small sample. If I showed you a movement of 2 cm (less than an inch) and asked you to discern the plane/angle of that movement, you would find it very hard to work out what that was. Similarly, if I tried to teach you to move along that plane/angle, you would find it very hard to follow my directions. On the other hand, if I showed you a movement that was 15 times greater (30 cm or approximatley one foot) then you would have a much better chance of understanding what plane/angle I was talking about.

In other words, students of karate are taught soto uke so that they can learn to move their forearm along the optimum plane/angle of deflection. The basic soto uke is a learning tool. It is not a technique. Yes, you'd hit me if I tried to throw my arm out to the side first. But that is not what I'd do. I'd move from wherever my arm was placed (assuming a soto uke was a suitable defence).And I'd do so along the appropriate plane. I'd know how to move along that plane because of my practice of the basic (kihon) soto uke. My movement might be a greatly abbreviated version of the basic drill - but I'd owe its effectiveness to my basic practice.

How to perform soto uke correctly

Having established what the basic soto uke is for, let us examine how it should be performed as a basic. The video below is apposite:

As I have previously mentioned, it should not have the extraneous body movement of the Zanshin Shotokan video above. It should be economical. Having "full" movement does not entail having unnecessary movement.

So you don't throw your arm out behind you. Rather, you raise your arm out to the side - as if in a salute, but with your fist clenched.

From there your follow an even curved path to the point where your forearm finishes - ie. at 45 degrees to your chest, with a 90 degree angle in your elbow and with your fist at the height of your shoulder.

As I note in my video, the most common mistake people make is to "flap" their elbows: in other words, they let their elbows lead the movement. The forearm is what is being used as a deflection - not the elbow. Accordingly the forearm must move as a single entity. If you lead with your elbow - or any other part of your arm - your forearm will not be moving as one entity.

What happens to the other arm? It should move in synch, pulling back at the same time as your deflection is being executed. This means that in basic practice your blocking arm will go out to the side while your other arm is stationary. When it is up at the side, both arms move. I suspect it is this "apparent absurdity" that beguiles non-traditonal martial artists: why would one arm "do nothing" for part of the movement? Very simply, this is so that students can learn to move their arms together at the right time and in the correct manner.

Some schools (eg. Zanshin Shotokan) effect a punch with the "stationary" arm - presumably to deflect criticism that "nothing is being done" at that time and that it is hence "ineffective". But this misconceives the purpose of the basic soto uke. It is a drill for learning angles and planes of movement. It is not a fighting drill.

I must emphasise at this point that the basic soto uke drill is indeed very basic. It is for white belts. But lest you think it is easy, take a good look at how it is commonly done - in your dojo or on the net. Most beginners "elbow flap".

Soto uke as a fighting technique 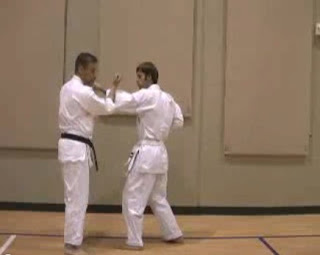 You will note from my video that soto uke can and is applied in a much more abbreviated fashion than the basic drill suggests. In fact, I find that it is the most commonly applied traditional "block" in sparring. There must be something about the movement from outside to in that lends itself to the "flinch reflex". Regardless, take a look at any "melee range" sparring that involves deflections and you'll see that it is easily the most common deflection applied.

Not only that, but most karateka who are aware of what I have called "secondary" applications of traditional blocks (see my article "Two for the price of one: more about karate 'blocks'") will traditionally show you that the soto uke is actually "built into" the standard jodan uke or age uke - the rising block (another essential basic technique). For example, take a look at the video below at around 1:06:


A discussion of the applicaton of basics, including blocks 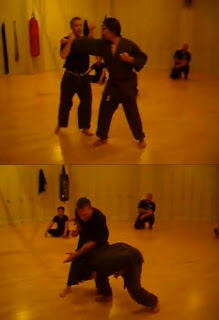 The beauty of the soto uke in its basic form is, as you will see from my own video at around 3:10, that it lends itself to quite sophisticated applications, in particular the shaolin "scissors block".

The scissors block is a technique that I have applied in my own sparring many, many times over the years. Sometimes you apply it against a punch, but more often than not it is simply a function of attacking an arm that is extended in front of you. It uses a friction grip rather than an actual grab - reducing the likelihood of your grip reflex leading you into trouble (more on this another time).

The scissors block is commonly attributed to shaolin (for example, I recall it demonstrated in Robert W Smith's "Secrets of Shaolin Temple Boxing"). But it can be found as an obvious applicaton of many karate kata (eg. the goju kata seiunchin) - as it can of the basic soto uke. This probably has little to do with karate's purported origins in southern China. Rather it is more than likely a case of convergent evolution. The scissors block is there because it works. And it works because the soto uke works.

The basic soto uke is a drill. It is a drill designed to teach beginners to move their forearms along the optimum plane for deflecting an attack inwards using the outside of their forearm. As a drill it can look quite stilted and stylised. But it is designed to teach beginners a concept; not a fighting technique. The fighting technique is a more abbreviated movement. But to abbreviate something you must know what the "thing" was in its original, "fuller" form.