Following my recent revelations about the jian, I have finally “bitten the bullet” and purchased two “real” jians.

The first of them is my lovely Hanwei cutting jian designed by noted Chinese sword authority Scott Rodell. This jian is the one I plan to use for cutting practice. Scott designed this after having handled over 3000 antique jians; it is not a plaything, nor a display piece, nor a brute “cutter”. It is finely balanced jian, that is both historically accurate and specifically designed for cutting.


A video showing me unpacking my Scott Rodell cutting jian.

I chose the Rodell cutting jian very carefully, as other “jians” are often: 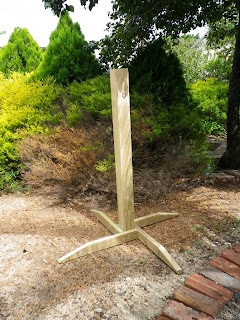 In order to use it for cutting practice, I’ve had to construct a special cutting stand to accommodate plastic bottles and other objects. I'm no handyman, but I think you'll agree from the adjacent picture that it worked out okay - especially for a job that took me about an hour all up.

I’ve purchased the wood for a second stand dedicated to cutting tatami omote (rice bundles) but the construction of it can wait. My current stand is more than enough for now.

Why is it important to practice cutting? Very simply, cutting is essential for correct form and technique. Let me give you an example:

After more than 3 decades of weapons training I thought I'd be just fine with cutting. I couldn't imagine not having it pretty much "down pat". After all, I'd spent years doing bokken, arnis/escrima/kali and Okinawan kobudo. A lot of my practice involved hitting targets - at which I've become reasonably adept: I can impart a lot of force with my blows. Cutting had to be similar - right?

Not exactly. I found my backhand was pretty good, straight off. But my forehand was rubbish. Out of the first 20 or so forehand cuts, only 4 were really clean and accurate (thankfully, 3 of these were the last 3, so I know I'm on the road to improvement). 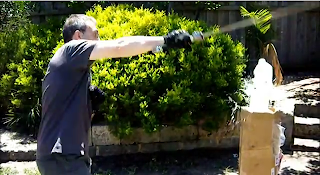 What had happened? Quite clearly my form was not as good as I'd assumed. I had enough momentum and focus all right; what was lacking was my wrist angle and the consistency of that angle during the cut. I found my wrist was wavering a little mid-flight. This caused the water bottles to fly off the stand (even though they were cut in half). With the backhand I was able to cut them cleanly in half without the bottle shifting off the stand at all.

So in order to refine your technique and ensure your movement is correct, you simply must do cutting. There is no substitute. Air cutting can only take you so far. 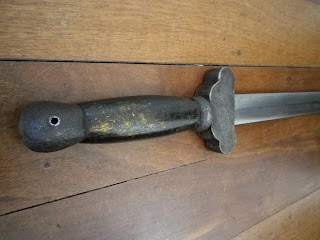 The second jian I’ve recently purchased is an antique. I have named it 金龍 or "Golden Dragon".

I think it is probably a Qing dynasty sword and I estimate its age at about 200 years. It bears the upturned guard of the earlier Ming dynasty jian, however this style did survive for some time into the Qing dynasty, especially in the northern rural areas.

The sword is a slightly "up market" village jian: it is really quite unadorned and utilitarian in its design, however it makes one important concession to aesthetics, ie. the scabbard and handle which are made of bamboo, painted black and sprinkled with what appears to be gold dust, then covered with clear lacquer. This detail tells me that the sword was some family's heirloom as well as being a pragmatic tool of civilian defence. I intend to honour that family by keeping the sword in good condition.

Since receiving the sword I've removed some surface rust from the fittings using oil and light rubbing and it has come up a treat. From now on it will be easy to maintain.

The sword otherwise bears the hallmarks of a village kiln, with pitting due to impurities in the metal. The sword is typical of functional swords of years gone by in that its blade is noticeably wider and heavier than most ceremonial or dress swords today. 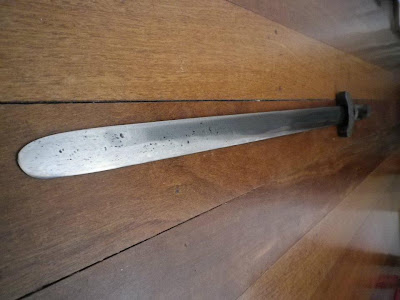 The swordsmith did a fairly good job apart from this, and the blade shows signs of differential hardening, including a just discernible "hamon". It is also clear to me that the sword did, at some stage, see action. Damage from that action might account for the slight shortening of the sword from what appears to be its original length. At 27" the blade is still long enough to be within traditional jian parameters.

Typical of many antique village jian, the sword is not perfectly balanced by any means, however it is still relatively easy to handle (the point of balance being an inch or two further towards the tip of the blade than I'd prefer) and I think the sword is quite usable in forms practice (although I don't plan to use it for cutting!).

Purchasing the antique jian has certainly made me appreciate the historical accuracy of the Rodell cutting jian.

In the end, both are works of art: one old, one new. And both are the "real deal".