Magic in the small things 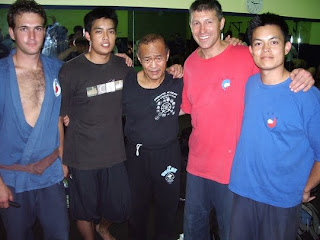 Somewhat synchronously, I have recently had a number of different reminders of something that is fairly fundamental to martial arts study.

First, I have only just discussed the importance of basic or fundamental skills, such as stepping in stances.

Second, this excellent essay by Scott Sonnon reminded me of something I've said to my students for many years:

"There's magic in the small things."

By that I mean that the true essence of martial arts does not lie in being loosely familiar with hundreds of techniques, but in truly understanding all the subtleties of a few.

And last, earlier today a beginner in the martial arts sent me a query directly relevant to these issues. Essentially his question was this: when, if at all, would it be appropriate for him to start cross-training in different disciplines?

My answer to him was as follows:

My first teacher, Bob Davies, told me that it was inadvisable to dabble until at least nidan - which in our case corresponded to at least 8 years training. I can see the wisdom in this: that is how long I trained before dabbling in arts outside those my teacher taught me. You need to develop a strong foundation in one system before looking at others.

If you choose to train in multiple disciplines, I think it is best to do so under a teacher who does all those disciplines as part of one system. That is how I started (my first teacher taught multiple arts). In that way your teacher can present the information in a way that is not contradictory or confusing.

For example, we teach a bit of Filipino stick and knife fighting from day one with our karate because we've found that they don't contradict each other (at least, not in the way we teach them). I also teach multiple internal arts because the Chen Pan Ling system has rationalized them as different facets of the same system. Where in some schools xingyi and bagua are very different, in CPL they are recognizably different sides of the same coin.

So in essence, I recommend that you stick with one system/teacher, attain a level of competence and familiarity in it and only then cross train. Alternatively, if you simply must cross-train, pick something totally different (eg. judo and karate).

Bear in mind that time spent on other systems will be time taken away from your primary system. This means that you will spread yourself thinly and slow down your progress in all the arts. Unless you have no other work or home life, this will necessarily be a limiting factor.

And, most importantly, in martial arts, it is far better to master a small set of techniques than to have shallow knowledge in a large set.

I credit a solid foundation in one art with my ability (whatever that might be) to understand and absorb other arts. When it comes down to it, that foundation is what I rely upon. The rest sits on top. While I know my way around multiple martial arts now, you have to remember that I've been training continuously for more than 3 decades. Most of those 3 decades have been spent developing one set of core skills. I've found that these core skills are transferable to other arts. But I had to truly understand and internalize those skills (ie. make them "my own") before they became transferable. Without that deeper understanding, I would not have recognized the same skills arising in different contexts. I would have focused on what is different rather than what is the same. And the differences would have confused me.

For example, some systems punch with a vertical fist, some with a full corkscrew action. Which is better? How do you decide such an issue as a student faced with 2 competing pedagogic paradigms? It is only when you've understood that they are both part of one continuum (decided by reference to things like range) that you see how there really is no conflict between the 2 methodologies. [For more on this topic, see "Why 'corkscrew' your punch?".]

To come to my own understanding of the punch, I had to do many hundreds of thousands of them - in the air, against makiwara/bags/shields etc. So when I came to study wing chun, I didn't see it as a different, diametrically opposed, system, but rather a discreet focus on one aspect of something I already did. It wasn't a marriage of alien systems. It was a deeper exploration of a part of my existing "system".

Accordingly, you should commence "cross-training" only when you realize that there is no "crossing" at all; there is merely emphasis.

Remember: there is magic in the small things. Having a good understanding of the punch is better than having a catalog of one hundred different strikes in the back of your mind somewhere. Stick with one art, make it your own. Then you will be in a position to absorb other systems' methodologies within one cohesive, integrated framework. Until then, the various cross-training methodologies will remain separated in your mind. Separated, but similar, methodologies will compete and confuse. In order to be able to use your martial arts (ie. apply it reflexively under pressure), you need one harmonious system in your mind, not competing, antagonistic ones.

It is only in this way that you can aspire to "transcend" form - ie. see fighting for what it truly is - and not from the perspective of a particular style (eg. as a judoka, karateka, gongfu or silat practitioner, etc.).

Form (how a technique looks in a particular style) is a mechanism designed to teach a principle. Each style's form approaches the understanding of that principle from a slightly different perspective. That is it's function; to help you understand and absorb the principle. Until you really, truly, understand that principle and have totally absorbed it, you won't recognize it in different forms. The outward difference in the forms will be what is at the forefront of your mind, not the shared underlying principle.

So learn one "form". Study it until you understand the principle inside and out. When it is truly part of you, you will begin to see it in other forms. These other forms might "value add" to your understanding by approaching the principle from a slightly different angle.

Then, and only then, might you be able abandon all of these forms. That is the goal (albeit a hypothetical one) of traditional martial arts. It is why my first teacher called his school "Wu-Shin" (no form) - even though it was chock-full of different "forms" taught in a particular order.


An interview with Bruce Lee where he advocates "unnatural naturalness" or "natural unnaturalness" (set to start at the right point).

Abandoning form is what Bruce Lee advocated. Unfortunately, many people don't seem to know or acknowledge that Bruce had already attained a fairly high degree of understanding of principles through traditional art forms (in particular wing chun) before coming to his realization. It is no accident that none of his students (except perhaps Dan Inosanto) rivaled his own expression and multi-style ability. They had not mastered one form sufficiently before delving into "no form". They had failed to attain what Bruce Lee called "unnatural naturalness" or "natural unnaturalness" - the ability to translate formal technique into a dynamic, unpredictable and resistant environment. This ability can only be attained through mastery of form.

For this purpose, no particular form is better than another. For Dan Inosanto it is kali. For the Gracies it is BJJ. For you? Take your pick and master it. Only then can you abandon it.


A demonstration by Dan Inosanto: note how he absolutely "owns" the techniques; they are part of him to the extent that he doesn't have to "think" - they just emerge. This is the mark of someone who has truly mastered form - to the point where he can "abandon" it.

When the form is abandoned you will be left with principle. That is when you will be in the best position to see that style is just a path, not a destination.