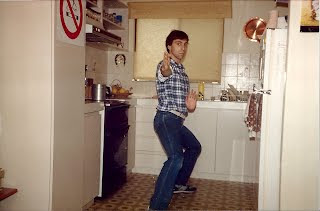 Many years ago I was at the house of my friend (and student) Damon. We were studying for our final law school exams. During a break I was absentmindedly going through some kata movements (I recall that it was seipai kata from goju ryu) when one of Damon's other law school buddies, a fellow named Ian, came around for a visit. Seeing me performing the kata in Damon's small kitchen Ian furrowed his brow and shook his head in mild irritation.

"Why do you guys keep doing that stuff?"
"What 'stuff' do you mean?"
"You know - that 'Ha so karrrateee!' business. I kind of get why you might do it in classes, but what the hell makes you want to do it standing around in... someone's kitchen for God's sake!"

I was a bit taken aback by Ian's critical response to my impromptu practice. Among traditional martial artists this sort of "training" is really quite common. The next time you're with a karate friend, notice how he or she will start doing some small hand movements from kata while you're sitting/standing around, doing nothing in particular (and when you're not in some public place!). It is an unconscious thing. It comes from doing an activity that you enjoy - perhaps even love.

My response to Ian was, I think, quite apt. As Ian was talking I'd grabbed an umbrella from a stand and I'd started doing what cricketers do when they find a suitable stick or odd bit of wood - they assume the batting stance and start practising the "block" - presenting the bat to stop the ball from hitting the stumps. This is usually preceded by some taps of the ground behind your feet. (Baseballers can imagine their own variant - a kind of gentle warm up "swing" or "testing of the bat".) Ian was still talking, oblivious to my "cricket moves".

Now Ian, like Damon, was a competitive cricketer; they both played at a club level. Damon even played at an international level, having represented Australia at the Maccabiah Games. They would both regularly grab the nearest "bat-like" object and started "practising". The difference was, Damon was also now a brown belt in karate - and he had also taken to "practising" karate in such idle moments (much to Ian's chagrin).

Ian snorted. "If you say so." Then he changed the subject. I don't think he really "got it". To him karate (and the Eastern martial arts generally) were appropriate to chop socky movies with their corny dialogue, far-fetched plot lines and highly improbable physical capabilities. In other words, to him the art of karate had more to do with a pajama-clad parody than something someone would pursue seriously and passionately (eg. cricket!). 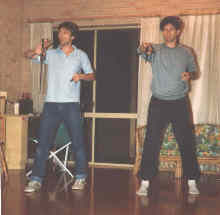 But to those who practise traditional martial arts like karate there is nothing "corny" about them. They are every bit as worthy of practise - and passion - as something like cricket. Perhaps even more so. Depending on how you approach them, and what your goals and purposes are, martial arts can go right to the core of the 'human condition' - to our fears and insecurities, the nature of conflict (which often arises from those fears and insecurites) and the management of these things. So it is no accident that martial arts are often associated with philosophical traditions like Daoism and Zen.1

Which brings me back to the kitchen episode: what was I doing that day? What were Ian and Damon doing every time they started "batting" with a suitable-sized stick? We were, all of us, doing what I now call "kitchen training". What does this entail? Essentially it is a kind of absent-minded "training" one does during idle moments. Usually it does not raise even the slightest sweat. Rather, it is done slowly and deliberately, with the repetition of foundational movements (think of that cricket "blocking" action or the baseball batter's "testing" of a bat). Often enough the practitioner will casually cycle through a short sequence comprising those foundational movements.

So what function, if any, does this serve? Is it useful - or is it just idle movement that amounts to nothing?

I believe that for a complex physical activity, "kitchen training" is vital. I've come to the view that it is mostly during such movement that one "beds down" important kinaesthetic principles, mapping neural pathways in the brain and grooving actions and angles/planes of movement so that they become second nature; so that they become truly a part of you. In other words, "kitchen training" is where you start to "own" certain techniques/movements. It is here that they go from being something that someone else might do, to something that you do. And something that you do spontaneously.

Think about it: if the only time you practised cricket batting was during formal practice at the nets or during a match, what hope would you stand against someone who was constantly - even in idle moments - refining his or her batting action?

I'm fairly sure that if you did a poll of the world's top sportsmen and women you'd find that "kitchen training" was a common element. I have yet to meet a golf player who doesn't occasionally swing away at an imaginary golf ball with an umbrella; a soccer player who doesn't grab the nearest ball - even a tennis ball - and start bouncing it on his or her knees and feet; a basketballer who doesn't twirl and otherwise play with a kid's plastic ball. And so it goes.

I believe that if you examine people like Tiger Woods and Roger Federer, you'll find that "kitchen training" is part of what defines their capabilities. It almost certainly invades their private moments. It shows that they love what they do. I doubt that they would be the world's best without that love. Furthermore I believe it also accounts (at least partly) for why they are the world's best. They don't waste idle moments; even these are put to use in some sort of "training". 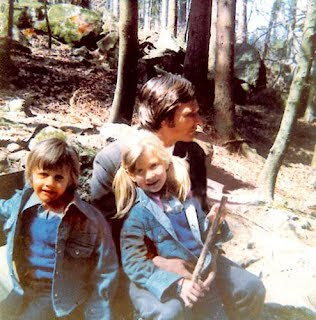 I've heard that Steffi Graf used to hit golf balls against a wall using a stick. I'm certain that this sort of "casual practice" is what helped her gain unerring consistency with her shots. And tennis is nothing if not a game where consistency counts. Indeed, if you take a look at Steffi's childhood photos, you'll notice that she is often holding a stick. I suspect she was habitually "kitchen training"...

It is important to note that no champion at sports ever "forces" themselves into "kitchen training". It is spontaneous. It arises out of a love for the activity - an excitement, intellectual stimulation or other passion. It has nothing to do with "conscious effort". It is just "something that you do" - just as Ian frequently used to go about "phantom batting", often in our law library. The only difference between Ian's and my "kitchen training" was that one was more "culturally acceptable". Accordingly, Ian felt less inhibited about his "cricket displays" - yet was openly derisory about my "martial arts displays" (which he no doubt felt had a farcical "chop socky" quality to them).

And so, even today, I'll generally keep my "kitchen training" private. Sometimes I actually do such training in my kitchen while, say, stirring pasta. (This confession is likely to get me in trouble. When my wife reads it, she'll know why my pasta is invariably overcooked!) Why the kitchen? For starters, it has enough space for small sequences. It also has no obstacles for me to trip over. Finally, it is usually fairly private. Other places I have used for "kitchen training" include elevators (naturally when no one else was with me - and I hope no video camera was recording!) or deserted beaches (where I used to take my dog for a run and I'd casually go through a form to see the pattern it created in the sand) - or just about anywhere where I wouldn't attract the attention of people in white coats!

Over time I've found myself developing little drills that I do out of habit during "kitchen training". These tend to morph over time as my interests and the material on which I'm focusing changes. But some constants can be noted:

Because the area in which such training takes place is often fairly small, the drills must be short and "circular", making use of the space but not having to go outside it. Ideally, the drill will also "loop" - ie. it will go back to the beginning, permitting endless repetition. The drill below is one I created during "kitchen training" and it comprises the essential elements of the first section of the Chen Pan Ling taijiquan form. I've found it so useful that I've started teaching it to beginners in my classes.


A looping taiji drill I invented during "kitchen training"

Once I get a little bored with such drills I'll start to "play" with them subconsciously. Here is the same drill with some variations - mostly in relation to turns and pivots:


A video where I "play" with the preceding drill

But usually the "kitchen training" comprises much smaller sequences. These tend to be formless and impromptu, but sometimes I will deliberately focus on certain movements that I can't do (at least, to my satisfaction). Sometimes I'll try the mirror image of a movement (eg. "single whip" from taiji). Sometimes I'll take these movements and morph them into drills to challenge my students (see my previous post!).

The important thing is to let your mind "deconstruct" what you're learning; to take it apart and reassemble it in myriad ways. It is this subconscious process that allows you to "take ownership" of the "form" of your art - to make it truly part of you so that it is no longer something that is "imposed upon you" but rather something that emanates from you reflexively.

And whatever you do, don't let inhibition get in the way. Trust me: if your friends and family aren't already used to you doing "Ha so karrrateee!" stuff, then they'll get there. Just be careful about public places - and don't let the pasta overcook!

1. Now it's true that I've seen books like "The Tao of Cricket" and "The Zen of Cricket" on the shelves, proving that even a sport can be elevated to a philosophical level. Clearly martial arts does not have a monopoly on combining wisdom with physical activity. For starters, the Japanese even associate Daoism and Zen with things like Chado (tea ceremony) and Shodo (calligraphy). But when it comes to comparisons with Western sports, at least we can say this: martial arts "got there first"! They are no "poor cousin" to Western sports - even if they are easily misunderstood, occasionally mistranslated by some movie producers and "New Age" adherents, and otherwise parodied in Western culture.