When I first started practising taijiquan in late 1989 I was somewhat perplexed by the sequence known as "single whip": Here was this curious series of movements, it's final position so often captured in still photographs as the essence of taiji – one hand in front, the other out at the back and slightly to the side with the wrist bent as if "holding a dirty sock by the tips of the fingers"! It seemed totally unrealistic and irrelevant to fighting. 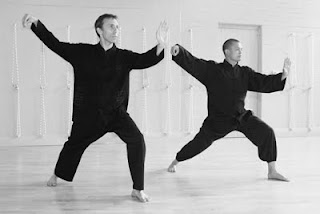 Try as I might, in the following years I could not think of how or why one would bother with this "posture" (it is more accurately described as a sequence of movements) as a "fighting technique".

The best I could do was "shelve" consideration of the sequence until I had further information. Since many of my most admired martial elders practised taijiquan I reasoned that there must be some good reason for it.

Then in 2005 I had the honour of becoming a student Chen Yun Ching and his adopted brother James Sumarac – and applications were shown to me that revealed single whip for all its true potential. I discovered that it is more than just a stylised exercise, more than just a small part of some elaborate, arcane "dance". It is, in fact, one of taijiquan's main tools for teaching essential principles of civilian defence. In this article I'd like to start sharing with you some of my reasons for coming to this conclusion.

A defence against the surprise punch

In my recent article "That first punch: can you really "block" it?" I covered what I often call the "surprise punch", although a better term might be the "sucker punch" – a blow that is thrown when you aren't expecting it (or rather, when your attacker assumes you're not expecting it). 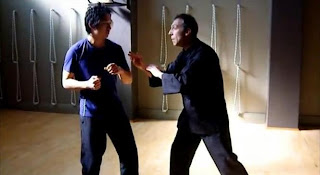 In that article and my follow up article "Necessary and reasonable force" I described the necessity of reactive skills a – for logical, as well as ethical/moral and legal, reasons. I've previously described other pragmatic reasons for needing to know some reactive defence skills (see "Surviving the surprise attack").

As it turns out, the very first application of single whip, as shown to me by Master Chen, is precisely for this context. That shouldn't come as a surprise: taijiquan, like the jian (the double-edged "tai chi sword" that I've previously discussed), is and always has been for civilian defence. It was never intended for the battlefield or as a combat sport.

Anticipating the most common punch

So how does this particular single whip defence work? For a start you'll note that in every single style of taijiquan, single whip occurs to the left – to be applied on the inside against a right straight/cross. Why? Because it is, statistically, the most likely first punch you will ever encounter and moving on the inside is similarly likely to be your only available option. Note the following:

Most people (possibly 90% of the world's population) are right-handed. And people will tend to strike you with their preferred hand. 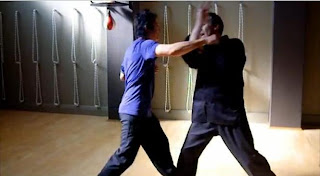 That this strike will have some form of curve is, I think, statistically so likely it is virtually inevitable: Only those trained in classical martial arts (from a boxing jab to a karate punch) default to a totally straight punch. By contrast, those who are most untrained will simply swing their arms in a wide arc (ie. a "haymaker" punch). Those with a little knowledge or experience can be expected to have some curve even if the punch is "straighter". Those who are reasonably experienced fighters will use at least some curve to add power to their strike. Last, only those who are reacting defensively in a civilian defence context are likely to use a conservative straight thrust.

Accordingly, the most likely first punch you're going to face from an unprovoked attack is a right handed one with an element of curve.

Moving on the inside 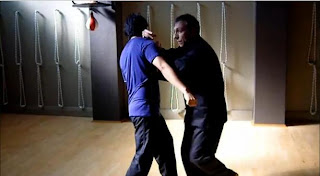 It is important to note that "moving to the outside" of such a punch is going to be quite difficult. I say this despite my previous arguments about dimensional analyses; it might be fine for an highly experienced martial artist to understand the mechanics of deflecting a curved punch on the outside, but this tactic requires significant and very specific training. For this reason I think it remains an incontrovertible fact that people find it very difficult to deflect or block a curved attack on the outside of that curve.

And the corollary to this is that moving to the inside of the curve is the quickest, shortest way to intercept it. This is because, by definition, you are already on the inside of a curved punch: you don't have to move anywhere.

So how does single whip work against such a punch? The first thing to notice is that single whip operates in two phases:


My video of single whip against that first punch

The first phase involves a retraction of your body, accompanied by an extension of both of your arms outwards. This is a modification of the flinch reflex. The movement of your body backwards is going to help take you out of prime hitting range, while your arms are going to try to intercept the blow. Working together, the punch can be deflected. 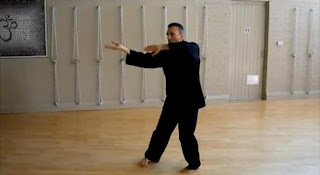 Single whip uses primarily your lead hand, which in this case is your right. Why lead with the right? Because, as with using a straight sword for civilian defence, you are primarily interested in keeping your opponent at a safe range – not saving your big punch for "later". So you will have your preferred arm leading, doing the (difficult and important) job of protecting you (although that arm will quickly convert into a counter attack, as we'll soon see).

Your lead arm will intercept your attacker's punching forearm at what I call the "Goldilocks zone" – roughly half way between the elbow and the wrist. The deflection intercepts the attack with your lead forearm anywhere right up to your wrist. Furthermore a scooping action with the wrist enables you to:

o maximise contact time with the attacking arm, intercepting the attack early and following it as it gets closer to you, redirecting it all the while; and

o use the action of the wrist as well as the forearm to create a circular "sweep", adding force to your deflection along the principles of staged activation while also depressing the attack slightly downwards at the end (ie. aiding the deflection and control along two separate planes). 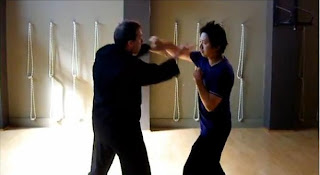 Not wishing to leave anything to chance, your reverse (left) arm is also kept in play; it augments the right in intercepting the attack, so that if your primary arm misses or otherwise fails, you have a backup. The defence concludes as your body has reached maximum retreat (pulling the bodyweight onto your back leg).

The second phase of single whip involves a counter strike. This is executed with the back of your wrist which, having scooped sideways and down, continues its momentum in a continuous (though small) circle. The force of the scooping action is thus converted to a back-of-wrist strike under the chin, to the carotid sinus or otherwise to the face, in a quick snapping motion. 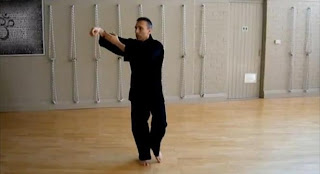 This counter attack is timed to coincide precisely with the "returning wave" of your bodyweight which shifts back onto your front leg, driving as much momentum into your blow as possible in the circumstances. Civilian defence arts are not geared at "powerful strikes" as I've previously discussed. Accordingly, if you're looking for some sort of "power strike", you've come to the wrong place.

What single whip does supremely well however is generate a surprising amount of "bang for your buck". It is impressive how much force can be generated from a back-of-wrist snap. And this can be more than sufficient for a sensitive target such as under the chin or the carotid sinus (or, for that matter, several other vital points in that vicinity).

Taijiquan is full of such counters: strikes that don't require much force to achieve an effective result. In this case, the strike might (or might not) be enough. Regardless, it buys you time against that surprise punch; and it does so as conservatively as possible, with its first aim being your protection and only its second aim being a counter. 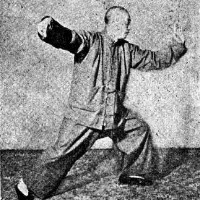 In relation to the latter point, it is important to note that at all times both arms stay above the centre sternum line. This accounts for the (somewhat odd) hand position mid-way through the movement.

People have often asked me why in single whip it is necessary for your back hand to touch your lead forearm. Well apart from being useful in terms of further counters, it is also useful in further defence (if necessary). In other words... it is there if it needs to be used!

However, as previously discussed, if it happened to fall below the centre sternum line, it would be functionally unavailable. In other words, having your back hand touch your forearm is first and foremost about a reminder: to keep your arms up through the entire defence; both in defence and in attack. Dropping your guard unnecessarily, even with one arm, can be catastrophic. And civilian defence arts are not about risk-taking.

In this article I've started with the most basic, yet possibly the most useful (for civilians anyway) defence single whip can offer. As you can see, this defence is "low on power striking" and big on conservative movement that ensures your protection first, before going on to counter strike. 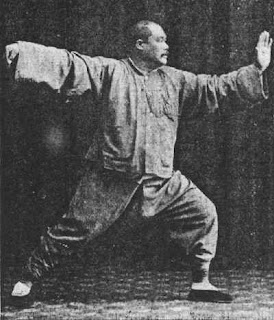 But it would be an error to consider single whip as two separate movements anyway. I know that in this video I keep saying "one, two" but in reality the technique is called "single" whip for a reason. You are really generating one continuous circular movement; there is no reversal of momentum in your arms – instead they inscribe a small circle that deflects and feeds back onto your opponent a sharp, nasty, whipping counter to vital regions. The unexpected and (to most people) unorthodox nature of the counter adds to the "surprise factor".

The next criticism of single whip generally goes: "People don't tend to throw only one punch." However there are two answers to such a criticism. The first is that this statement is statistically untrue; most untrained attackers throw a single, nasty surprise punch (see the videos embedded in my recent article on this topic); if they follow up with other punches, these are launched well after that first punch has landed. But in any event, single whip contains defences against multiple punches, particularly the classic "one-two" of a jab and cross. This is precisely why single whip keeps both arms "in play" as I have discussed.

I will cover single whip's defences against multiple punches (and other fascinating applications of this technique) in Part 2 of this article. For the time being, take note of single whip: far from being a stylistic "dance" it is in fact a powerful antidote to what I've previously described as most people's main "civilian defence nightmare" – that nasty, unprovoked, surprise first punch.