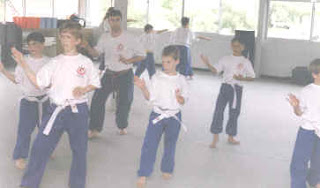 Many years ago, I recall my teacher Bob Davies saying the following to me:

"What sparks a revelation in one student won't in another. Something that motivates or inspires a particular student might have no effect on anyone else in your class. In each case there is a key. If a student can't do a particular technique or isn't progressing generally, look first to yourself as the cause of the problem. Have you found the right key? If not, keep trying until you do."

Now it's true that there is a limit on how much an instructor can beat him/herself up. But that doesn't mean he/she should stop trying either. A good example was a class I held last week:

I was pouring heart and soul into teaching a group of taiji beginners: I was amiably and patiently going through the movements, being careful not to over-correct or over-explain while ensuring that they had the requisite information. However I could see that, despite my best efforts, they were still struggling. They simply couldn't get a "feel" for any of the movements – even remotely.

No matter how I slowed things down and broke things up, no matter what analogy I used, no matter that I praised even the smallest improvement - every time I had a look behind to see what they were doing, I saw carnage: limbs everywhere, bodies contorted like in a game of Twister. All from an instruction to step forward and do a single hand movement. They had moved wrong leg, the wrong arm, at the wrong angle, in the wrong direction, along the wrong circle: you name it, it was wrong.

I remembered my teacher's words and put the blame on myself. I hadn't found the "key" to these students' learning. They weren't failing – I was. People are different, and you can't rely on explanations and methods of instructions just because they have worked before.

So I went right back to the movement and started again, choosing a different tack (being careful not to make them feel discouraged).

I was part way through demonstrating the movement when I looked up and saw that one woman had, without warning, simply walked off the floor. She was grabbing her bag and towel and walking out of the door. 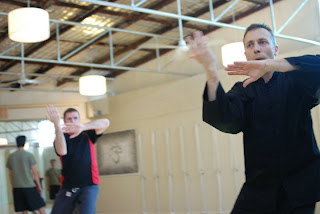 Now at some point you have to let it go. There are some people who have insufficient interest in the activity to continue. Yes, they came along to try out the class but perhaps they found out that it just wasn't for them (whether it was because they were after something more physical and less cerebral, because it is too physical, because the nature of the movement isn't to their taste, etc.). Heck, not everyone is going to like taiji or karate or whatever else you might be teaching! This doesn't mean they shouldn't try it but it also doesn't mean that you should, in every case, take the blame for their disinclination towards your particular activity.

Thankfully "walk-outs" have been a very rare event in my teaching history. I've taught over 1,000 people and I think it's only ever happened to me twice. Yes, I've had the usual "once only" tryouts, but even these occupy a minority of the students I teach in a year. Nevertheless, every time a student walks off, doesn't come back the next class or is just left scratching their head, I see it as something for me to address. Or at least do my best to address. You have to keep trying. You have to keep looking for that key.

I've been doing this for long enough to know that sometimes the most unlikely tack results in an "Aha!" moment; the strangest analogy or (what is to me) the most counter-intuitive approach taps into their subconscious. Sometimes it is because I've been working on an incorrect assumption as to what will engage the student, sometimes because the student has a particularly unique way of looking at things. Either way, there is no "blame". The only "blame" arises if the instructor stops trying. 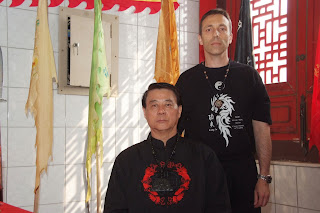 I recall my students coming back from Taiwan and I noted that their heng quan had suddenly improved. Master Chen had described it to them as a kind of "inward brushing action". Armed with this description the pieces suddenly fell into place. Master Chen had achieved what I had not been able to; he had found the key. But then again, that is part of why he is a master...

So what should we look for in a "key"?

Most adult beginners will attempt to apply logic to their learning – I see it all the time (I'm "guilty" of it often enough). This process is easy to understand; logical analysis is an approach that serves us well in problem solving or at work or learning a new computer task, etc. But your job as a martial arts teacher is to wean them off this "conscious" thought process. They have to learn to do things subconsciously. If they don't, they will simply take too long. Even if they can do the relevant movement slowly, logical or mechanistic thought processes have a tendency to result in staccato or mechanistic movements. Just as with music or calligraphy, you must flow - in other words, move without hesitation. You can't keep stopping and restarting as you second-guess every step you make.

I've noticed this difference with children: they don't even try to adopt a "logical" or "structured" approach to a new movement. They just do it. Yes, the movement might not be completely "correct", but it is usually a fair approximation from the get-go and they refine it as they go along. 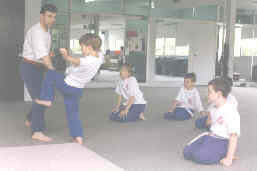 Children are uninhibited about their learning. And, moreover, they are still engaging in a great deal of other motor learning; learning to stand, then to walk, then to run, then to jump, then to catch a ball, then to kick one, then to hit one with a stick/bat/racket, then to balance on beam/surfboard/horse, then to dance... The list goes on. Their primary neural pathways are still being mapped, so they adopt the same "suck it and see" approach with everything they do. Because they know intuitively that it is the best way to learn anything.

Adults are a whole lot more cautious in their learning. And this is unsurprising. By the time some of them come to a beginner taiji course, they might have dispensed with any significant motor learning for the better part of 2, 3, 4 or even 5 decades. Their primary neural pathways have long been mapped; their memories of "just diving in" almost completely faded.

Does this mean that an adult can't learn martial arts? Of course not! Adults can indeed engage in motor learning. As with learning languages, music or anything else, it is just that little bit harder. We adults have so much in our crowded brains that we have to find a bit of spare space – a sufficiently empty room, if you will. It is the instructor's job to find the key to that room. 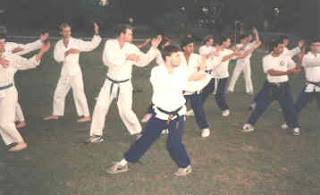 Whether the student lets you try that key is another matter. This might be something over which you have little control. But it doesn't stop you looking for that key. That is not just your challenge – it is your duty. It is part of your job description.

So what did I do when the student walked out? I turned back to the remaining students and kept on searching for their respective keys. To have done otherwise would have been to give up. And to give up would have been a true measure of my failure.

Now none of those beginners came back for this week's lesson. Instead I had an entirely new group. But wouldn't you know, this particular group took on everything I could throw at them - and then some! They were quite possibly the fastest-learning taiji beginners I've ever taught in my career. And just to look at them you wouldn't be able to spot the difference from the preceding week; they comprised the same broad cross-section of ages and backgrounds.

Different students. Different keys. Happily I found the right ones - at least, this time! It did serve to remind me never to give in to discouragement; never to abandon that search. If ever I do, it will be time to step away from the front of the class. Thankfully the fear of that sort of failure is far greater than the fear of another walk-out.