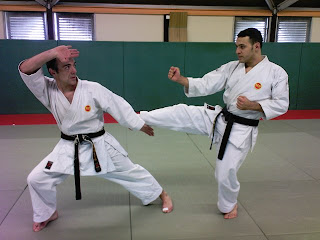 Okay, so this common, indeed popular, view is one of my biggest "soapbox items":

Of course, I'm referring to two separate movements off the same arm (eg. to one side, then back to the other; or up to the ear, then down low). Obviously I don't subscribe to this view.  In fact, I think it is a misconception.  And, as far as martial arts misconceptions go, I think it is one of the worst.

In fact, I see it as blatant nonsense.

Doesn't everyone has a valid viewpoint?


Now I can see why some people might be scratching their heads here: why can't we just "agree to disagree" - everyone has a perspective and why should one person's be more "valid" than another?

Well my feelings are strong on this issue precisley because the "blocks comprise two movements" misconception is profoundly wrong: in physics, objective design analysis and, I suggest, actual (historical and modern) use in civilian defence contexts.

This is only compounded when the misconception seems both "logical" and "self-evident" (just as we once thought the Sun flew around the Earth and that heavy things fall faster).

It takes a lot to shift such fundamental, unchalleged misconceptions, so I know I have my work cut out for me.

The consequences of the misconception

The big deal is that this issue is fundamental to civilian defence: so fundamental that misconceiving it has the potential to fundamentally obfuscate (indeed, derail) centuries of sound, tested and proven methodology.

Specifically, the notion that "traditional blocks comprise two movements" often leads to the common refrain that "blocks don't work" (at least, as "blocks").

This, in turn, leads to dismissal of traditional civilian defence arts, or at least anything involving "blocks", as "ineffective".

If it doesn't lead there, it still results in a more subtle "revision" of traditional forms whereby blocks are interpreted as anything but blocks!

The latter has spawned quite an industry of "new bunkai specialists" who tour the globe holding seminars and selling books and DVDs to disenchanted traditional martial artists who long to salvage something from the many years dedicated to their disciplines. 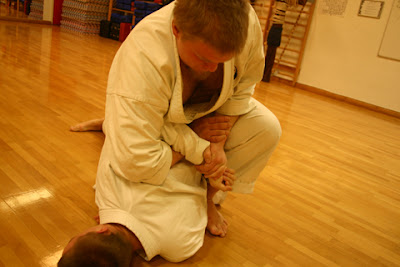 Now it is true that many of these are adding real value to the pool of martial knowledge by exploring things like tuide (grappling) and other more sophisticated applications - and doing so without detracting from the use of blocks as blocks.

In my experience, such instructors are very unlikely to suffer the misconception that "a block comprises two moves (not one) and accordingly can't possibly work".

But equally there are many who do fall prey to such this misconception, and accordingly are apt to spout the mantra "a block is a lock is a strike is a throw - but never an actual block".

It is interesting that some of these martial artists actually use blocks anyway in their bunkai - but without any sophistication or real knowledge of how this (vital) element works.  Instead of acquiring a deeper knowledge and skill in the science and art of proper deflection, they hurry past it to get to the more "interesting" attack component.  Accordingly their "blocks" amount to little more than basic palm slaps.  Defence is, it seems, not that important.


Others actually insist that "hard blocks are really important to our style" (when I think it is plain that hard blocks are, invariably, little more than "soft deflections done inefficiently").

Your bunkai are so yesterday! 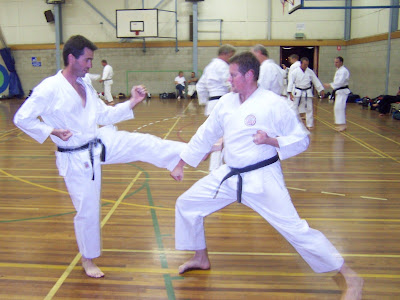 In this context it is unsurprising that such a mindset ultimately leads to the conclusion that blocks can't possibly be used in the way some (now unfashionable) 60s, 70s and 80s teachers (with "shallow", "basic" knowledge) used to imply.

No - the real (hidden) meaning - one known only to those with a deeper understanding - is something else: something that has been "rediscovered"; something that requires the most obvious meaning to be ignored while some other, often very far-fetched (indeed, tortuous) construction is preferred.

Well, what if this is all a big pile of hokum?

What if, while sequences comprising blocks can and should be revisited for other more complex applications, it turns out that they are also highly effective as... well... "blocks"?

What if blocks offer the key to civilian defence (as opposed to sport or military fighting) - especially where you are faced with an element of surprise in close quarters with little time, opportunity or legal/ethical/moral justification to launch a pre-emptive strike and where you are forced to rely on a withdrawing flinch reflex?

The latter can only be true if the most fundamental objection to the humble block is resolved: namely that blocks are actually time-efficient.  And they can only be time-efficient if they comprise just one move to match a given attack, and not two.

Well I'm here to tell you that this is true.  And next time I'm going to show you exactly why.