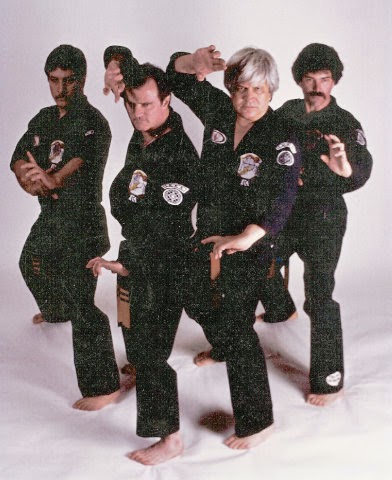 Before I leave the subject of Ed Parker behind completely, I'm going to delve into something I touched on very briefly in my last article - his hand postures.  I'm doing so because the issue was raised recently on the Kenpotalk forum.

A friend of mine, MarkC, posted that he felt the postures were "fake".  Another replied to him as follows:


"So tell me again why posing with the extended fingers is some kind of fake. In fact tell that to Ed Parker and his followers. This is the form of the Crane and there is a specific application for it."

So I replied with the more or less what follows below:

There are two types of "postures" seen in photos of quan fa practitioners:
The poses of "strikes" are usually what quan fa people adopt for photos. Here's me posing with others at a temple during training in Taiwan: 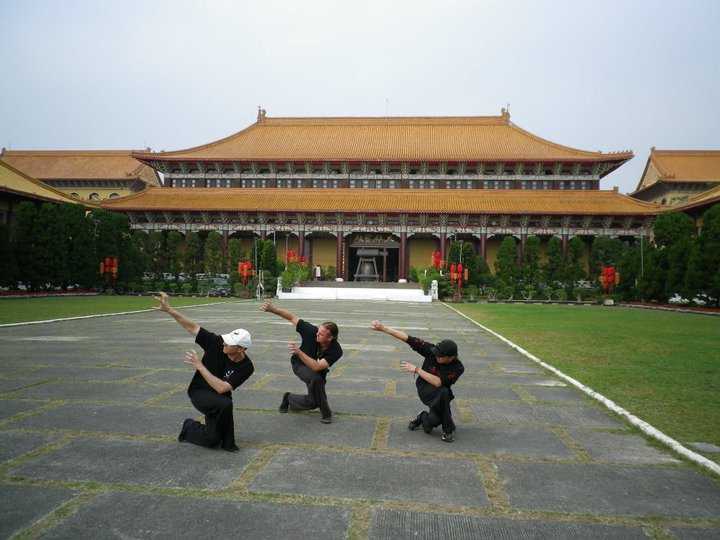 The strike is used in action in the tiger crane form (which is related to the one used in modern kenpo). In this case we're using tiger claw - not as a "guard" but as a strike.

Here is a picture of how blurred it is in actual movement when you don't freeze for a pose: 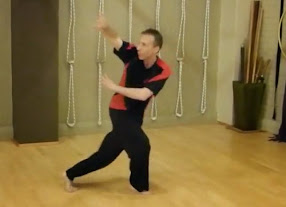 By contrast, it seems to me that many kenpo hand poses are usually not indicative of a move from a form, but rather a "ready" or "guard" posture (what is known in karate as a "kamae"). 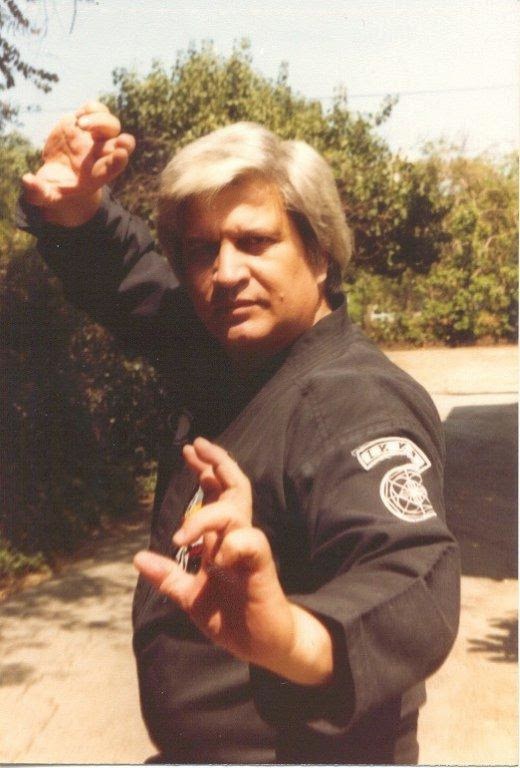 These hand configurations seem to use (very loosely) the sorts of striking forms found in Parker's book "Secrets of Chinese Karate". The one above looks like "eagle claw" (although it is rather too loose and floppy in the fingers to be a "strike").

The "Secrets of Chinese Karate" hand configurations are indeed authentic but they are never, ever used in "guard" or "ready" postures, as far as I know. They are only seen at the moment of a strike. 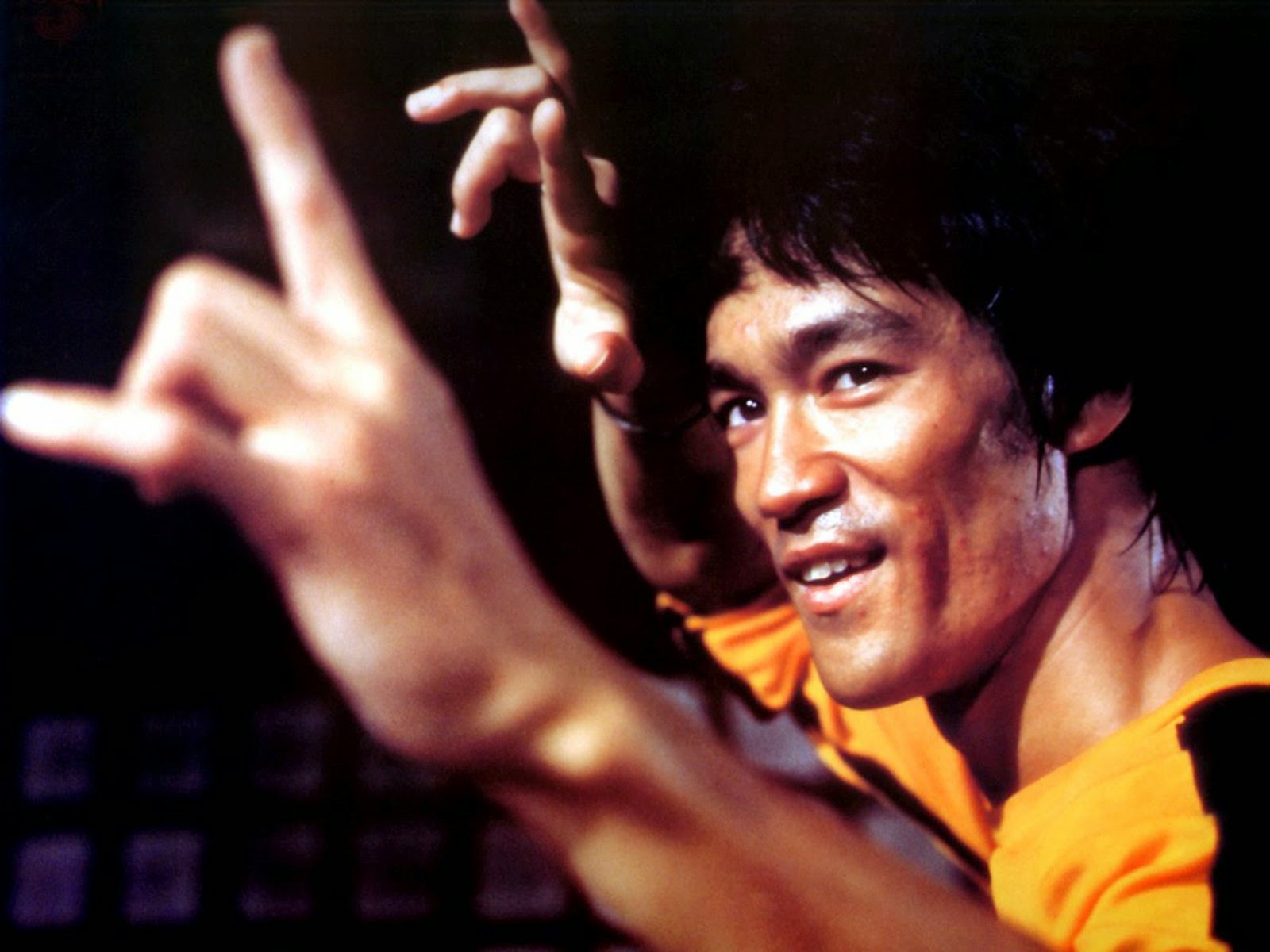 Yes, I know, Bruce Lee did some strange hand movements too.  This was his brand of nonsense.
I'm pretty sure that it was mostly for cinema; if you watch Lee sparring or demonstrating something seriously, he didn't seem to use any of these.  In other words, they seem to have been poses purely for the camera.

Regardless, just because Bruce Lee did something doesn't make it necessarily practical or meaningful in a martial sense - particularly if he did it in his movies.

I think it's also fair to say that Lee one of a kind - he could get away with his eccentricities, given his athleticism, skill, speed and popularity.  Everyone else using funny hand "guard" positions (including his legions of imitators) just looks plain silly.

Most importantly, as MarkC pointed out, everyone (whether Bruce Lee or not) who uses such hand postures risks the very real problem of having his/her fingers badly jammed and bent/dislocated/fractured/broken.

Having had damage to my fingers many, many times (and bearing permanent signs of this - including bones that jut out at odd angles, fingers that won't come together, etc.), I've learned the main reason to keep your hands in fists when in a "guard": to protect your hands.

There's a reason boxers, MMA, Muay Thai, karate, etc. all use fists in guards.  It's not necessarily because you want to use them for punching. 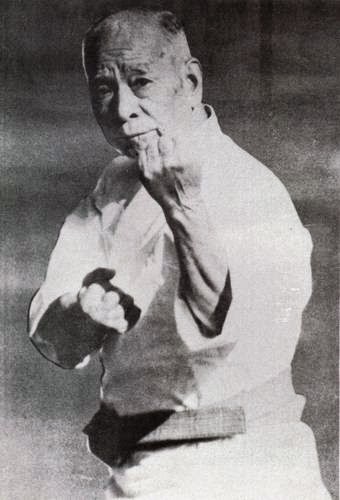 Jammed fingers can end a fight very quickly as your hands become useless when one or two fingers have been bent back 180 degrees in the wrong direction. Over the decades I've had to visit Accident and Emergency at least a dozen times with fingers like the x-ray below. I've since learned to keep my hands in fists when fighting. That's kept me out of the A&E for 10 years or so and I wish to keep it this way. 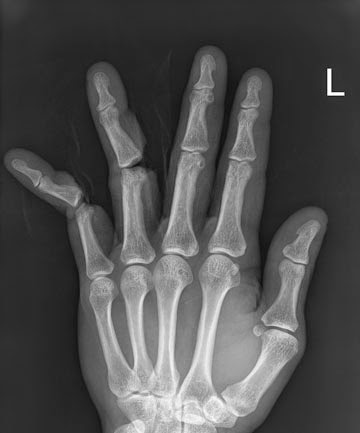 So basically, my summation is that anyone thinking they can get away with a "guard" using a loose-fingered "guard" is really affecting a "quanfa look" rather than a real fighting posture. 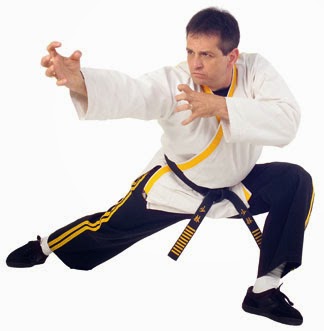 It's an affectation and it's positively dangerous - to you.

Real quanfa "poses" look something more like Shaolin kempo practitioner Steve Demasco in the image on the left.

I don't know what technique Steve is doing, but it looks like a strike or pull/claw etc. He's certainly not "guarding", but is instead executing something - a technique - using his fingers. Note the relative tension in the "claw" fingers.

So yes, this is a pose and uses a "funny hand shape". But it isn't an "guard" or "ready" posture. It is a snapshot of a movement in a form.

By contrast, the standard Parker/Parker-inspired hand postures look "fake" because they look like "imitation quanfa" rather than the kenpo Parker actually used. 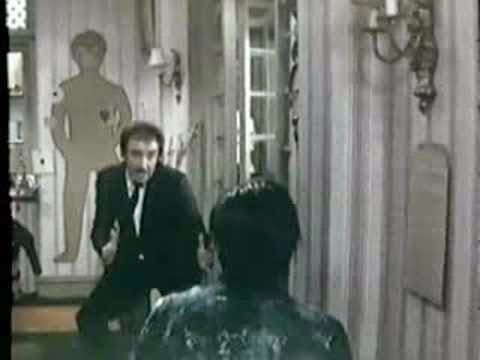 They look "fake" in much the same way as early Hollywood impressions of "karate" did when they used strange "hand chop" postures that no one in karate had ever seen.

Consider the picture of Clouseau fighting Kato on the right.

No one in karate fights, or has ever fought, like this - just as no one in quan fa (or kenpo) actually uses the strange hand postures Parker and Lee made famous (at least, not when facing a resistant partner).

I suspect that these hand postures were retained long after the art of kenpo had substantially evolved from its early 60s incarnations.  They were kept for the reasons Lee kept his own "fake" hand postures: because they "looked the part".  Now they look plain dated and silly (on both Parker and Lee!).

Despite the above observations and my previous ones, I want to make something clear about Ed Parker: I believe he truly did contribute something important to the martial arts.  In many respects he was well ahead of his time.

Parker, along with Bruce Lee, was one of the principal martial arts teachers to break the mould of "single counter" responses that were so common in the first decades of Oriental martial incursion into the West.  This emphasis on "single counters" was certainly a result of the rather literal interpretation of the "ikken hitssatsu" (killing with one blow) philosophy employed in the most popular schools of Japanese karate at the time - and their somewhat basic manifestation (in the West particularly).

So to me, kenpo's strengths lie in its amazing combinations and "technique conversions".  Consider the demonstration below - still impressive today.

I credit Parker because I don't think these types of combinations came from his teachers (Mitose and Chow). Rather, the whole "combination approach" of kenpo seems to have been Parker's innovation (if not entirely, then mostly).  Others have since built on his work.

Apart from his kenpo legacy, I'm fairly certain that Parker also indirectly influenced many karateka and gongfu practitioners to go back to their roots - to discover applications that involve such combinations and not just the old stilted "single technique responses".

The idiosyncrasies that "tagged along" with Parker's art - like his hand positions and his "cover outs" - don't detract from his overall contribution.  They should, however, not be preserved uncritically as part of his "lore".