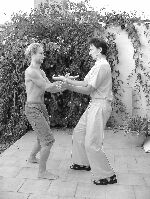 I have heard it said in crane circles that there is a different sanchin for every student, or words to that effect. I don't know if that is true, but every variant of crane seems to have a sanjan/sanzhan/saamchien.

Ngo cho kun (5 ancestor fist) is based on 5 shaolin styles of which crane is one, hence they have sanchin.

While Kanbun Uechi's art seems to have been a compilation of his all his various studies, I think it was most heavily influenced by white crane. Uechi certainly looks a lot like Fujian white crane (in my view much more than goju).

For downloadable videos check out my friend Martin Watt's site: http://www.fujianbaihe.com/. He does Yong Chun white crane. His site has links to his Chinese school's site (which has more videos).

Also have a look at Eric Ling's sanjin on http://www.goju-ryu.info/ (Fuzhou Ancestral Crane - said to be the crane form that lead to all the crane variants - calling crane, flying crane etc.). Eric also has a version of happoren/paipuren/baibulan (a kata said by some to have formed the basis of tensho). It has the same name as happoren (ie. same Chinese characters) but to my eye looks completely different.

Pat McCarthy tells me that dog, monk, tiger and lion all have sam chien / sanzhan (sanchin). This makes me wonder whether these arts are “crane derived” or whether sanzhan predates crane. Given the importance of the number “3” in sanzhan (3 battles, etc.) it is possible that sanzhan is a Arhat/monk fist derivation with Buddhist significance (I’m told that the number 3 is of some importance in Ch’an Buddhism, hence the repetition of sequences 3 times in southern Shaolin forms and in karate - see the opening sequence of sanchin, seisan, sanseiru and suparinpei, for example).

However I have also seem to recall that the stance used in xingyiquan's "san ti" posture was referred to as "zhan bu" or "battle step" by Hong Yi Xiang in Taipei. I'm starting to feel more and more certain about my theory that sanchin stems from xingyi...