Further to my article on the numeric names of kata:

In Chinese schools (eg. ngo cho kun) the kata is called "saam chien / sanzhan" while the stance is called "chien be / zhan bu" (battle stance) . The latter is probably the more "correct" description/name of the stance. By comparison, in karate we could perhaps call sanchin dachi "chin dachi".

The kata name "sanchin" means "3 battles" and my theory is that the "battles" referred to are not "mind/body/spirit" or some other elaborate philosophical concept. Rather, I think the explanation is more straightforward: The kata is named after 3 sanchin dachi steps:Given my thoughts on the pragmatic kata naming conventions in Fujian in the 1800s (again, see my article Numeric names of kata) I think the present kata name is shortened from the full Chinese name of the kata: "san zhan bu / saam chien be" — ie. “3 battle steps”. In this regard, bear in mind that the kata is performed with 3 forward "battle steps" in most of its incarnations - in Okinawa and China.

Because the number 3 in sanchin is already qualified by "battles", it would have been easy to drop off the "bu" or “step” from the kata name. Note that other numeric Okinawan kata names are commonly referred to in their shortened form — eg. sanseru, sesan, etc — even if their formal name is accompanied by “te” etc.

Ockham's razor would favour the simplest explanation for the meaning of “sanchin” and I feel this is it.

However a complicating feature in relation to the naming of sanchin stance and kata is that it is possible that the stance derives from the stance used in xingyiquan's "san ti" (3 heavens) posture - a stance I am told is sometimes referred to as "zhan bu" or "chien be" - ie. "battle stance (see above). 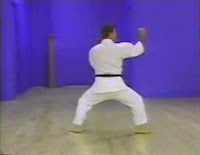 The stance used in the "san ti" posture corresponds to what is known as "seisan dachi" in IOGKF (in seisan at the point of the uppercut). The IOGKF seisan dachi is a longer version of the seisan dachi used in the shorin schools - which in turn happens to be identical to the sanzhan used in many Fujian white crane schools, including Yong Chun (back foot is out, front foot straight) — see my article titled Seisan — the universal kata?.

I think it is very likely that the long history of associating the number "3" with the stance that we now know as "sanchin" makes it hard to be sure whether the chicken came before the egg...

For more information related to this topic, see: Sanchin in Chinese martial arts.