Further to Part 1 of this article...

I discuss how tenshin/taisabaki has been used as the foundation of our "embu" or 2-person forms in the article "Muidokan embu: 2 person forms for karate". That tenshin is a vital, yet largely forgotten, skill is something that I highlighted in Part 1 of this article. 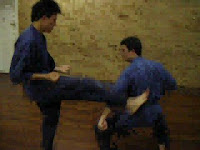 Yet recently the value of tenshin (and accordingly our embu) has been debated on an online forum (in relation to our gekisai embu in particular). The argument is a considered and sophisticated one, but not one that is without answer. I will address it here because it is worthy of being dealt with comprehensively.

The correspondent (whose opinion I respect greatly) offered this viewpoint:

"Also, as far as taisabaki in the drill, this is where I think my training differs a bit from your approach, we do not spend much time doing any kind of circling movement as evasion, we practice the "getting small" and blending you see in many movements in Goju kata, we practice close in angles, and we practice going through and "splitting" the opponent in receiving techniques.While I can greatly respect your work Dan, the circling movements and almost aiki-style evasion (sorry if you don't like the term, I can't think of anything better to describe it at the moment) do not fit into my own understanding of Goju Ryu. That said, there are many different interpretations of Goju and I suppose that I wouldn't have it any other way. All in all what you're doing really looks great and it's a shame we are so geographically removed otherwise i'd definitely be wanting to visit!"

What most people misunderstand with our gekisai embu is that they are strictly for beginners - the tenshin (evasion) is larger, just like basic bunkai where you move 45 degrees back, etc. This is actually quite basic.

If you look at the seiyunchin embu the tenshin is very subtle - moving in and splitting angles very finely indeed. In our shisochin embu the evasion is even more abberviated.

In other words the evasion that the correspondent referred to (not unreasonably) as "aiki" is a basic: an enlarged or magnified movement. It functions just like most people's ippon kumite bunkai. However, just like basic blocks, the movements become smaller, more subtle in the higher kata. Understanding the basic tenshin lets you apply and understand far more subtle evasive skills.

In the internal martial arts this level of ability is taken for granted. Evasion is barely noticeable.

You'll note from Part 1 the 8 principle angles of evasion. However this description is, at best, a crude description that permits beginners to begin understanding evasion.

For example, we tend to use terms like 45 degrees back/forward. This is just a label for a complex angle that depends on the nature of the attack and the experience of the defender. In reality it could be just a sliver of an angle. And also, it might not involve just forward at an angle, nor sideways nor any one of these: it might involve a compound movement that varies during the movement itself. So I have found anyway.

In our school we have attempted to take all these factors into account as well as the student's level of ability in structuring our drills and syllabus. None of this is apparent to most casual observers - and unlike the particular correspondent in question who has offered a reasonable debate, many are just plain derogatory about our embu or other "tenshin" related training without offering any basis for their criticisms.

Nevertheless I always try to give critics the benefit of the doubt. It doesn't mean that I am not inwardly [censored] that someone has casually dismissed all my research, hard work and sincere efforts in a single line.

However I have often found that when I have let a person explain themselves a bit more, I've learned something I didn't know before...