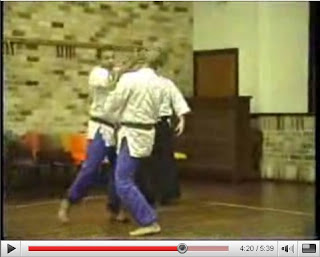 In my articles “Evasion vs. blocking with evasion” and “The karate 'kamae' or guard” I have mentioned what I call the “melee range”.

This is the range you're in when you're both swapping blows furiously - half a step in to elbows and knees, half a step out to a fully extended kick. In other words, wherever you step, you face a blow. Most other martial artists I know feel very uncomfortable at this range: for them it feels like the “no-man’s land” in tennis – the mid-court where the ball bounces. In other words, it is a place where you might venture on occasion, but generally it is too “hectic” to stay in (at least successfully) for any extended period. Like tennis players, most martial artists nowadays seem to stay at either an extended range (cf. the baseline) or in close at the clinch/grappling (cf. the net). The in-between is avoided, except in transit or unless the chaos of a particular exchange finds you there temporarily.

It is no surprise then that this “no-man’s land” is where one often sees “panic” set in. You’ll note that boxers don't stay here for long because it is hard to evade blows, so generally this is where they both punch furiously (sometimes parrying) until someone lands a big punch, someone backs off with an evasion or they go into a clinch. To quote a correspondent on the fightingarts.com forum: “Not much evasion going on here. If it's close up and personal, I'm going to exchange blows until one of us falls down.” The melee is what boxers often call “toe-to-toe” and it is the exception, rather than the rule, for people to stay in that range for long.

But in my school and my parent schools (right up to Morio Higaonna’s IOGKF) we have learned to feel quite comfortable in the “mid-range”. I've actually found that I use the “melee panic reaction” to my advantage - distance fighters are often totally flummoxed by my insistence at keeping this range for the duration of the fight. Just like grapplers are fond of saying they “own the floor”, I'd like to think that karateka should “own the melee”. This is where the karate guard, karate deflections/blocks and karate counters, strikes and kicks come into their own. 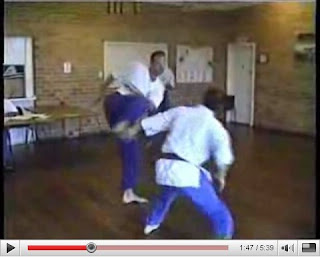 This contrasts with 'distance' fighting where you stand half a step outside full kick range and someone has to close - usually with a thigh kick or a jab. It's almost impossible to use any karate deflection at that range - or for that matter most karate techniques (including, for example, most kata bunkai).

As I’ve said before, karate is a civilian defence system with very different dynamics from combats sports. To quote another fightingarts.com forum correspondent: “most ‘attacks’ are not the ‘lets step outside - assume a fighting stance and then start the punch up’” scenarios. Rather they start – and finish - in the “melee range”. I speak from years of experience as a prosecutor and seeing/using in evidence countless surveillance videos of assaults.

Now I've fought good traditional distance fighters who use the often-seen “side-on” posture and try to keep you at an extended range. I've fought good boxers and similar artists who stay at a range, only to come into the melee with furious attacks, then break for a clinch or back away. I’ve fought grapplers who try to get in past the melee range so they can take you down. These all work with a good fighter. As I’ve often said, it is less the method than it is the skill of the fighter implementing the method.

But in the end, my view is that karate's techniques were not designed for any of these approaches. I often feel I’m fighting against the tide in this respect – relatively few people seem to be using their karate to dominate “the melee”. Mostly they try to fight distance only or use boxing strategy. If they get into the melee they look for an opening to grapple BJJ style. I think it is fair to say that many karateka have all but abandoned their traditional techniques as “unworkable”.

However my physical experience is that karate techniques DO work. They work, almost exclusively, in the melee. Why they work can be understood through simple physics (see my articles “Why blocks DO work”, “Evasion vs. blocking with evasion” and "Randori" - our "soft" sparring method where we practice fighting exclusively in the melee). Put another way, if people aren't using karate techniques in sparring, they should be asking why. If they can't match a boxer without themselves resorting to boxing, they should be asking why... 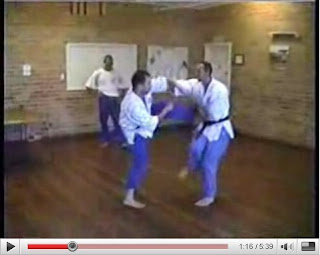 I think learning to use traditional evasion and deflection, learning to effect karate strikes and kicks, using the correct guard, learning to fight in the melee, etc. are all links in the chain of karate’s effectiveness. You can't have a missing link if you want it to hang together...

See also my articles "Staying in the melee" and "Keeping grapplers at bay".