Staying in the "melee"

My article “The melee: karate’s fighting range” has elicited many responses since I posted it on the net – many favourable and encouraging, others not so. I have had cause to address some of the points raised in forums and on the net, so I thought I’d summarise those comments here: 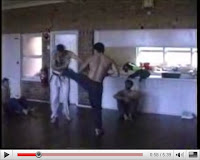 But your approach is too risky!

One of the principal arguments I’ve encountered is that “giving opponent an opportunity to hit you doesn't make much sense”. Another way this has been put is: “standing toe to toe and attacking will leave you open to attack.”

Superficially this argument might seem persuasive. However it relies on several flawed assumptions as to what I meant in my article about fighting in the “melee range” and about self-defence in general.

As a starting point, it is worth noting my opinion that the melee is the fight. Everything else is “sport”. Fights aren't about squaring off in stances, donning pads and bouncing etc. The fight will begin and end in the melee.

Yes, it is probably a foolish tactic to stand there just slugging it out “toe to toe”. But that's not what I'm talking about. Assuming you’ve just been attacked, you're in the melee deflecting/evading and countering. You wouldn’t stay in the melee "leaving yourself open". You would “stay” in the melee not so much out of choice but because you're fighting - and in real combat I don't see why your attacker would let you go "out of combat" that easily. 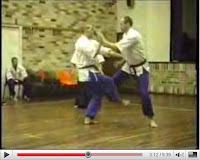 I’ve been taught to enter the melee only to elicit your opponent's committed attack or to "meet" an attack he has already launched...

What is unwritten is that, presumably, you either counter successfully or you step out of the melee. This works fine with an opponent who is “playing the game”. But what if he/she doesn’t?

This is as opposed to realising that your attack has been thwarted and simply backpedalling out of the melee - which even if you are successful in evasion etc. leaves you having to close the gap again...

Of course, if you can disengage and run away then this is always an option. For training purposes we assume that you can't get away.

Put another way, I'm talking about dominating the melee - learning tactics that will deflect attacks and set you up, just as I’ve suggested in my article “Is karate a striking art”. I'm not talking standing there exchanging blows "toe-to-toe" as one might occasionally see in boxing. The latter is not karate. Karate uses deflections/taisabaki as a set-up. The difference between the “dart in and out” style kumite commonly (and regrettably) seen in many karate dojos today and our “randori” approach is that the former trains you for a "one-off" while the latter trains you for a continuum. I see training in a continuum as vital - particularly since you don't (or shouldn’t!) actually land "finishing blows" in training, so you can’t rely on an “ikken hitsatsu” (one blow, certain defeat) methodology. You have no idea if your “single blow” will work – no feedback to ground realistic expectation of success and nothing in the way of a back-up plan. Training for a continuum is vital preparation for the chaotic environment that is the melee. 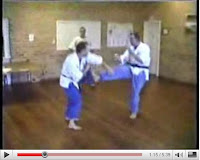 You don't stay there if you have executed a determinative counter! The reality is that the fight will be won or lost in the melee, so for what it's worth you will "stay there in a fight" until you have landed a sufficient blow to disable your opponent or allow you to escape.

And there is a difference between "staying there in a fight" and "staying there in sparring". In sparring you stay there because you and your opponent want the experience. You mightn’t even be able to complete a take-down or other “melee breaker” if you and your sparring partner are evenly matched (and neither of you can manoeuvre the other into a "checkmate"). Furthermore, even if I'm sparring with a junior I won’t (as a rule) press my advantage. I try to stay in the melee for training reasons. There I'll use the opportunity to try less-used/more advanced techniques. That way we both learn.

That crucial point of "deciding who will obtain a favourable position" is what it's all about, so one should train for it. What happens next (eg. your finishing blow) is not as important (makiwara, bagwork and less “chaotic” drills will teach you that).

I'm not talking about darting in and out. I'm talking about receiving your opponent's attack in the "melee" range and countering – then getting out!

Fair enough. But even if your "move in" involves receiving the attack, deflecting it, moving to the inside, countering etc. I would still call that "darting in and out". Why? As I said earlier, if your counter fails you can’t assume you’ll be able to get out of the melee just because you want to... And you might be coming in for than just one punch, but that doesn't change my perspective. You're still talking about “moving in and out” of the melee... 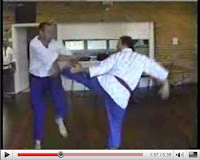 How is randori in the "melee" range any different from “faux boxing”? Both are nothing like real fighting

I've been at pains to point out that our randori isn't meant to be real fighting; it is a drill. It lets you become accustomed to that range and gives you the chance to learn the strategies of controlling the melee – deflecting/evading and countering. It is artificial in the sense that in sparring you can't land real, committed finishing blows. In a real fight if you are successful with your first counter the fight might well be over. On the other hand, if your opponent is good, you might be equally deflecting/countering each other for at least some time (unlikely, but possible). In any event, sparring this way gives you greater experience in the melee.

Of course, you can't rely on randori as your sole training. It does not replace other simpler sparring drills where you perform finishing moves. However randori does allow permutations such as "try to evade the grappler" because anything goes - grappling, trapping, striking, small joint locks, you name it. I've thwarted would-be grapplers in sparring with a few controlled contacts (that hurt just enough). The attacker could take advantage of my kindness in not hitting for real, but then again he or she could speed up to full speed. It's a drill that relies on cooperation. That is precisely why we call it "randori" (which in judo and elsewhere relies on some cooperation) and not "jiyu kumite" or just "kumite" (as some others do). It isn't fighting, nor is any so-called "free" sparring.

Why is it better training for a karateka than faux boxing / "bouncing" kumite? Very simply, the latter doesn't use karate techniques. Randori, by contrast, uses karate deflections and taisabaki which only work in the melee. Most karateka would agree with this, it's just that their sparring only takes them into the melee sporadically. Why?

Nowhere in my book is there a reason to disengage unless you have to. Backing out of the melee because your counter fails is very common, but, as I said earlier, I haven't seen this work very well with a person who isn't "playing the game" – he or she will follow you and try to hit you some more. Backing away often delays the inevitable. So you've got to learn to deflect attacks and stay in range. You have to get used to the melee and its dynamics. Spending only short bursts there is not good training given that, as I've said fights begin and end in the melee.

On the subject of "sport" sparring, is it really surprising that karateka should train both free and restricted sparring in the melee, and not all the attendant preparation (assuming stances, circling each other, etc.)? Isn't that precisely the difference between combat and sport? 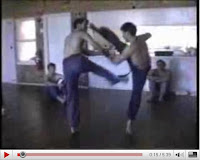 But to stay there just seems to break too many principles of the karate that I was taught...

That's the inertia I'm arguing against. Just because distance fighting (darting in and out) has been the norm in karate since the popularisation of ippon shobu sport doesn't mean that it is optimal. I believe it isn't. If it doesn't work against a boxer, muay thai practitioner, grappler etc. you have to ask why. I haven't seen anyone use this kind of distance sparring in anything other than dojo/competition. Nor does it train the "melee" except for very brief periods.

When I say that "karate is a civilian defence system" I do not (as many others) use this as an excuse for "why it doesn't work against boxing, muay thai etc.". Rather I use it as a reason for not adopting their sport-based methodology but instead preferring karate techniques such as deflections/blocks and taisabaki/tenshin...