I had this question asked of me recently: 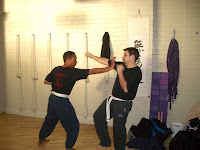 "Curious situation, I find that in sparring I am better able to deal with orthodox, skilled fighters rather than raging brawlers who throw flurries.

In a technical sense brawlers are easy to deal with but when it actually comes to going at it I'm thrown off by such a chaotic and aggressive style. I can handle them but it always throws me for a loop at first and it takes awhile to get my bearings and deal with that strategy. The punches thrown by "brawlers" tend to have less sting but they're supremely confusing. How do you deal with that?"

If this happens to you, then whoever you're sparring with in normal training is "playing the game"; probably bouncing/skipping, jabbing, etc. outside the melee.

This is why I have stressed the importance of methods like randori which train you for the melee. 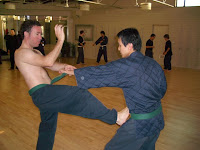 And again, this is a key difference between civilian defence and sport; in sport you circle each other looking for openings. Untrained fighters just go crazy with flurries staying in the melee.

I have, in the past, been quite surprised by how crazy untrained fighters can get - they can catch you quite by surprise. The only real way to be prepared is to train in the melee ALL the time. This is quite opposite to sports preparation.

On the other hand what most sports fighters say is that if you can beat a trained sports fighter you'll make mincemeat of an untrained fighter. True - unless you get caught by surprise because he isn't "playing the game"; or unless the skill/power differential is so vast that the surprise element just doesn't matter.

So you have 2 options:

1. co-opt a civilian defence strategy into your existing training by deliberately staying in the melee (and acquiring the necessary skills of deflection etc. to survive there); OR

2. get so freakin' good in ring fighting that it just doesn't matter!