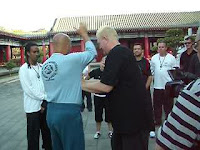 I would like to make the following observations on the subject of applications and forms, gleaned from my recent trips to Taiwan and Hong Kong:

My teacher Chen Yun Ching and my senior James Sumarac were at pains to point out that what they demonstrated as applications of forms were merely examples. Forms don't teach applications - rather they teach certain principles. Isolated applications make you aware of how these principles might be utilised in combat - they do not provide an exhaustive treatise on how they should/will be utilised. 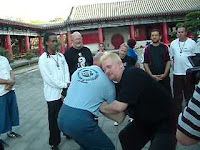 The reality is that you are unlikely ever to string together any chain of movements from a form, however you can extract the principle of the movements if you study them sufficiently and correctly. In practice this means applying a small part of a form sequence here or there - and perhaps more importantly it also means learning to avoid those techniques being applied to you.

Part of the reason why applications exist in the form of xing/kata/hyung/poomse etc. and not just as isolated "applications" is that they are not intended to be applied literally (ie. as a full sequence). Your opponent's possible initiating movements are infinite and his/her responses to your counters are also infinite. 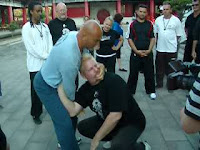 Chaos theory tells us that it is impossible to predict the exact path of a droplet of water on a window pane, even when a droplet of the same size is placed on the same point with mathematical precision. There are simply too many variables (physical, atmospheric etc.) that are continuously changing. You might predict with some certainty how your opponent will react to one technique (a block, for example) but after that the odds of your prediction matching reality decrease exponentially. 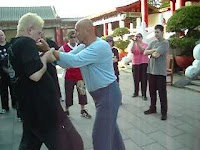 Applications of forms typically consist of more than one technique, eg. they have a defence - a deflection or evasion (preferably both) with a counter or series of counters. If forms consisted of merely one disjointed technique after another they would not be any more than a series of basics. Yet even 2 connected techniques is stretching "predictive accuracy"...

Forms and their applications can teach you principles of movement and how your body (and that of your opponent) move relative to each other. If these principles are understood well enough, you can adapt your response productively, depending on your opponent's movement/reaction. 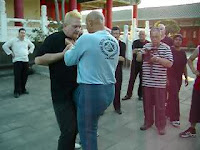 In my experience forms teach you a fairly broad cross-section of responses/principles that should "cover the field". Some form-based arts are more "complete" in this sense than others, but in general most established martial systems cover essential principles fairly well.

You could practice the techniques found in forms in isolation - ie. without ever doing them in a sequence or "form". But doing this would miss the point: forms place the application of techniques in a dynamic setting; ie. the techniques are being executed in a changing, shifting, flowing environment. This environment might not change or shift as it will in reality, but the form should teach you something about moving from technique to technique. 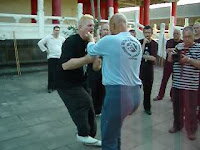 This process of "change" or "transition" is where forms come into their own. Forms are not a collection of stray techniques; they are tools for learning principles of transition. In other words, forms are about the process of change (as reflected in the bagua-related Chinese classic, the Yi Qing or "Book of Changes"), not about static positions.

Learning about the transition from technique to technique is what distinguishes forms and their applications from static practice (eg. "he does this, you do that"). Without understanding the process of change from technique to technique it is my view that you will never actually apply more than basics: a punch, kick or strike. Once you understand the process of change/transition on a superficial level you then need to attempt to apply this understanding in dynamic, flowing sparring (what we call "randori"). I think it is one of the many tools one needs to develop overall skill and is the only real forum for attempting applications from forms. 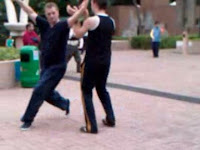 We call our continuous sparring "randori" however others call it "iri kumi" or "jiyu kumite" etc. In my recent trip to Hong Kong I had a chance to train (however briefly) with a bagua group led by Hans-Kurt Schäfer Shifu and noted their version which they called "playing".

This "playing" is vital to learning the art of actual combat. As I have noted previously, it is why dogs and cats (or indeed any predator/carnivore pups and even adults) "playfight". They are learning about response and transition. You can't experiment in a life-or-death scenario; in the latter case you have to be conservative and instinctive. "Playing" at various levels of intensity gives you the chance to grow - for those vital neural connections to be made. 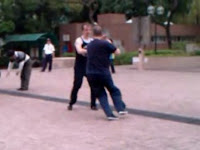 Where do forms and applications fit into all of this? Form training is a precursor; it is a method of stringing together techniques in a way that maps neural pathways in preparation for free sparring. As a method of practise it is, in itself, insufficient for combat. However without forms you don't have a solo forum for practising techniques in a dynamic setting; put another way, you don't have a means of learning the essential principles of movement from technique to technique. All you have is basics. Shadow boxing is not sufficient; it is not scientific for one thing and generally amounts to doing what you already know - not what you don't. It generally amounts to no more than a string of disjointed basics - usually strikes and kicks. 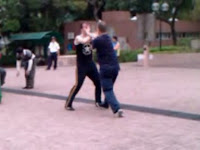 Every time I have learned a new form/xing/kata recently I've struggled to adapt to the new paradigm. Why? The principles of movement have been so vastly different from that which I've learned before. If you doubt me, do some karate, then walk into a bagua school, a xingyi school, a taiji school and then a shaolin school. It gets "harder" the more you master one art because your neural responses become so entrenched.

Yet every time I struggle with something new I am heartened. Why? I believe that the moment you come across something new to you - something you cannot automatically do - you have identified a "weakness" (ie. a kinaesthetic neural pathway that has yet to be mapped). And the moment you identify a weakness you are already stronger - assuming you are willing to do something about it.

So what should you do when you identify that weakness? You practise the solo form until you can do the movement without conscious thought - until you have "internalised" it on a solo level. Then you must go the next step of applying that movement (specifically the transition or principle of movement, rather than a specific bunkai) in a dynamic setting.

The extent to which I have "grown" during and since Taiwan has surprised me, and I believe has been apparent to my training partners. I only wish health would permit me to have capitalised on the "growth spurt" even more...