The art of checking

The art of checking is widely misunderstood and I thought it would be worth spending a bit of time discussing it.

The most common method of checking is a slap like motion to your opponent's forearm, usually following a deflection of an attack. An example of checking can be found in the sequence of photographs on the left which is taken from an arnis/escrima/kali based drill:

However, why would one ever bother doing this? Some would argue that the "check" is a "passive" movement that might have been more easily utilised as a strike in itself. Accordingly some have argued that the practise of drills that involve such checks is foolish and even dangerous. Consider the video below:

While I think there is a lot of merit in what the instructor in the video is saying, the principle issue for me is that he is assuming various things in reaching his ultimate conclusion that the drill (and hence this kind of checking) is worthless.

You don't always want to hit

If you're not trying to hurt someone, multiple checks can have their purposes; I have used them to "box up" my opponent without hurting him or her. I don't propose to dwell on this point however as I recognise it is not a major use of checking.

In my experience in sparring, "simple" and "direct" moves are all the go - until you encounter someone very skilled who is doing more or less what you do. That's when you might want to "mix things up" a bit.

I've done this drill since my first escrima days in the 80s. Do I do it a lot? Probably once or twice per year; hardly enough to cause serious "muscle memory" issues of the kind to which the instructor in the video refers, but enough to have exercised the brain a bit (the primary purpose of a drill as opposed to a combat application which you might want to inculcate into your subconscious).

Yes, the instructor in the above video does make a point: one should be aware of "passivity" and strive for directness. However he goes a step further and makes directness a panacea - a dogmatic assertion that I believe is flawed. Why?

I have already noted his assumption that a "direct counter" will always be best (it might usually, but not always). This assumption is, in turn, based on the more critical assumption that your opponent hasn't noticed the interception of his/her attack and started to react accordingly.

In fact this is one of the reasons why fighting (real fighting) between 2 skilled opponents doesn't feature "clean" techniques; very few moves are fully executed - most are half-executed, then modified etc. because of the constantly shifting/dynamic environment.

It is for this reason that I don't always advocate "directness" as a dogmatic panacea... You need to understand transition, not assume that your opponent will just stand there after the failure of his technique.

Put another way, a skilled opponent is going to throw techniques that can be modified if intercepted. 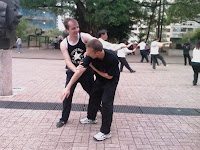 When I was in Hong Kong recently I applied a few arm bars on one of Hans-Kurt Schaefer's students in sparring, only to find that his punch (to which I had started to apply an elbow lock) was then transferred into a "snake creeps through grass" motion (from bagua/taiji) that went between my legs, neutralising the arm bar and throwing me. This was done just before I had managed to apply a full arm bar (ie. at a point I thought the conclusion was certain)...

Other reasons for "checking"

An important point I wish to make is that even very basic, rigid karate-type drills have their function: for all their "passive" movement they do teach kinaesthetic awareness of a kind that is crucial to overall martial development. In other words "non-combat" drills have their function. Bricks don't look like houses, but you can't build a house without bricks. In my experience those who don't have "classical" and "non-combat" forms training often lack the necessary kinaesthetics for future development.

However I think the more important reason for "checking" was summed up well by my friend and colleague Ryan Dickerson on the Traditional Fighting Arts Forum recently:

"Checking isn't about tapping someone's arm or limb just to get one blow, but (at least the way we use it) is used to control and maintain a connection to the opponent with the checking being done along side of footwork to better reposition oneself out of the way of the opponent's attack."

In my experience, kinaesthetic awareness of where your opponent's limb is (and where it is going to be in the next second) is the main benefit of checking. For example, it is very hard to get hold of a forearm/wrist on the first attempt; however check it first and you will find that on the next move you can grab it quite easily; your body/mind has some contextual spatial and time awareness, permitting a reasonable estimation of its positioning within the next second or so.

Arnis/escrima/kali practitioners know the importance of this concept well, particularly when a bladed weapon is in issue (grabbing a hand that is holding a knife is fraught with danger). The assumption of the gentleman in the video that seemingly "passive" movements in kali are primarily intended to slice tendons etc. with a knife is not entirely accurate; yes - they can be so used, but I think "checking" is more importantly a methodology for control.

Of course "checking" needn't involve a 2-handed exchange as demonstrated in the above sequences of pictures. Another friend and colleague on the Traditional Fighting Arts Forum, Jo Roman, wrote the following:

"In aikido and even chin na contact with the opponent's arm is established usually with the wrist/forearm, followed by sticking/sliding into the grab. This is even more so with techniques that use the same arm to deflect then hold the limb."

Indeed. The initial contact sets up the awareness, followed by the grab. This is irrespective of whether you use 2 arms or one.

In these and many other respects, checking is no different from deflection; clearly you can use one arm to deflect or you can use 2. Your deflecting arm might be used to strike - or you can deflect with one arm and strike with the other.

Deflecting by "simultaneously" punching/striking is preferred (I shall cover the question of what is "simultaneous" another time). If you can do it all with one arm (or other limb / part of the body!) this is arguably ideal. But this in no way invalidates other methods of deflection (ie. using 2 arms instead of one, not striking "simultaneously" etc.). They all have their time and place. I just had the opportunity to observe this in a systema seminar by Alex Kostic - a very pragmatic and direct martial artist who does whatever he has to do (which in some situations requires the use of 2 hands and not one).

A simultaneous deflection/strike with a single arm might be the best in theory, but it is a tall order for beginning students and often even for advanced ones. It requires pin-point accuracy and control. Given the premium civilian defence arts place on not being hit rather than hitting, those practising these arts need to be careful about abandoning methods that ensure deflection and control first, and put hitting second.

In the end, I see "checking" as a means of "mixing it up". It not only serves to give you alternative responses that can confuse an adept opponent, it also enables you to transition your control from one hand to the other, in order to gain greater control or so as to get into better range for your counter. The latter 2 are quite crucial against a highly mobile and resistant opponent.

As an aside, I see "checking" as a mere subset of using the "secondary move" in blocking or deflection, as illustrated here in relation to the karate "hiki uke" or "kake uke" (hooking block) (see also my article "Two for the price of one").

On a final note, it is worth observing from the above video that the check is often applied so quickly after the initial deflection that they are virtually instantaneous. The "extra" time, such as it is, is sufficient to gain extra control or move further into your opponent. I don't feel it is safe to assume that you will will already have that control or will already be in range because of a JKD-type interception philosophy.

Checking drills are not about replacing "directness"; they are about complementing it. They should not form a major part of one's training or they can indeed detract from "directness" training. They are a variation that is worthy of occasional consideration for the more experienced student.