July 27, 2009
Recently the subject of what is often called "bouncy tag" has reared its head at the Traditional Fighting Arts Forum. In particular comment was made about the Youtube footage of George Alexander undertaking a 50 person kumite in celebration of his achievement of his judan (10th dan) grade. I have embedded the video below:

At the outset I'll say that I think Mr Alexander's demonstration was reasonably impressive for a man of his age. I am not going to comment on the issues pertaining to his grade (for me the rank "judan" would surely be an honourary grade more than anything - a kind of "lifetime achievement award"). Rather I will simply observe that he shows skill at what he does in that video.

So what is he doing? Is it karate? Or is it something else? Many on the Traditional Fighting Arts Forum argue that it is not traditional karate, and I would respectfully agree with this position. As I have previously outlined, this is an example of "sport karate". This is not a derogatory statement, merely an observation that it is a particular, sport-specific activity and is not to be confused with the use of karate as a civilian defence system or as a traditional artform.

You'll notice from the title of this article that I've chosen to differentiate "tag" and "bouncy tag". "Tag" type karate competition is I think a reference to what is known as "ippon shobu" (a style of competition that draws heavily on the Japanese sword-based "ikken hitsatsu" philosophy of "single strike, certain victory").

Whether or not they "bounce" is a separate issue. "Bouncing" is to me a superflous "faux boxing" method often "tacked on" to sport karate (but not necessarily part of it).

I have heard arguments about how "bouncing" can help you in sport karate (via adding a ballistic momentum to your attack), however this to me argues only for the odd bounce here or there - not the continuous rhythm of bouncing that one commonly sees in sport karate. If you consider for example someone like MMA/UFC champion Lyoto Machida, you'll note that he was, in the past, a very successful "tag" or sport karate competitor without bouncing. Take a look at the video below:

In the above bout it is clear to me it is clear that Machida takes full advantage of the rhythm set up by his opponent's bouncing, enabling him to win. Machida is, in this video, doing "tag". His opponent is doing "bouncy tag" - ie. sport karate with a "faux boxing" overlay.

So how useful is "tag" karate (leaving aside the bouncy stuff)?

I've already noted my opinion that Lyoto Machida uses his karate experience in MMA. I think he even draws on his "tag" karate training which is evident in his "in and out" style of fighting. He draws on this experience, but it is by no means the sum total of his approach. In fact I think sport karate plays only a small role in his fight game today. I think everyone would agree that if he were to rely only on sport karate he would have never achieved any real success in the UFC/MMA arena. Rather, I think he would probably have been mincemeat. Yet, at the same time, he does use elements of his shotokan karate - even the sport karate aspect.

But does this mean all karateka should practise "tag"?

Overall I don't think tag contributes enormously to fighting skill, be it in a combat sports arena or in civilian defence. Furthermore, I don't see it as a time-efficient training method by any means. It is requires grooving a unique subset of martial skills that suit a specific sport.

To the extent that it can help fighting skill, how does it do so? What aspect has someone like Machida transferred into the MMA arena? I'll answer this by reference to my own experience of sparring with those who are highly skilled in sport karate: 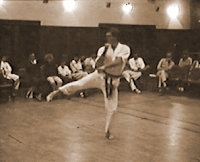 One of my sensei, Dave Goodwin, was a former shotokan black belt who changed to goju ryu. His courage and commitment in free-fighting were unbelievable. He would dart into a furious melee with complete control and land a superb punch. He had years of timing in that regard; he must have been able to see it kind of "slow motion" where I would have been reticent to run into a barrage of panic-stricken kicks and punches. This kind of timing and single-minded purpose is certainly a very impressive skill that Dave used to his advantage in other, more naturally flowing, fighting. And he never bounced...

On the flip side, most "tag" kumite is exactly that; tag. In other words you are training to "touch" or "almost touch" someone with a fully extended arm. I've had mates who were excellent "tag" fighters who missed their opponents in a civilian defence scenario; they were simply out of range. "Tag" fighting can groove some seriously bad habits because it can teach you to throw every punch/strike/kick out of range.

Often enough judges scoring the bout will award you a point only when they see your elbow lock - ie. so that they see a straight thrust that fills a space between you and your opponent and that does so with power, speed and focus. However they don't seem to care a great deal about distancing. Even when the punch doesn't fall entirely short, it is still too far away for optimum transfer of momentum. The punch ends up with an actual or potential penentration depth of only one centimetre or 2 (that's half an inch to an inch for you Americans). This is the kind of punching evident in the demonstration in the makiwara punching video below: the gentleman's penetration depth is, with the greatest respect to him, not deep enough.


Makiwara punching that could, in my opinion, benefit from deeper penetration

The net result is that unless you're careful, you might just groove to punch with insufficient depth or to miss entirely. This kind of grooving is different to grooving deliberate "control" as I've argued in my article "Control vs. 'Missing'".

So I think that apart from being a sport, "tag" karate can be put to use as a training aid, provided you ensure that -


(a) you don't groove the habit of "missing"; and
(b) you don't neglect other, more practical, training methods.

I say this assuming your purpose in training is to achieve some proficiency in civilian defence or to practise traditional karate for some other purpose (health, art etc.). [If your purpose is to become a sport karate champion, then of course my caveat above doesn't apply.]

Despite any potential use of "tag" for non-sport purposes, I remain of the view that it is an inefficient use of time in training for civilian defence. Nor is it "traditional" karate. Accordingly I choose not to do "tag" training as part of my curriculum. I nonetheless retain a healthy respect for many of my martial colleagues who excel in this activity and who have demonstrated to me nothing short of a fearsome fighting ability.