One of the most common queries I've had over the years from combat sports practitioners and eclectic martial artists is why traditional martial arts use the forearm as a blocking/deflecting surface. Why not use the palm?

Indeed the palm is a useful tool in "blocking" (ie. deflection/parrying and sometimes even actual blocking/stopping). However what is inherent in the question is the assumption that the palm is fundamentally more useful than the forearm. The forearm is often seen as "brutish" or inelegant compared with the sensitivity afforded by the palm. 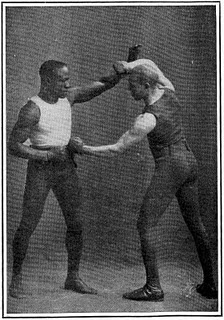 Yet the traditional martial arts are full of forearm blocks. They are common throughout the Asian martial systems. They are even a well-established part of Western boxing traditions, going back as far as Ancient Greece right up to the more modern bareknuckle boxing era. [Consider the adjacent image as one of many examples one can find. As a side note, take a look at hip chamber being used!]

So what's going on here? Why do the older, more traditional martial arts make use of the forearm where its use is almost completely ignored in modern combat sports? The answer lies, to a large degree, in considering the purpose/goal of traditional martial arts as civilian defence systems - especially the range in which techniques are going to be typically employed. 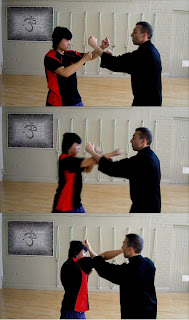 Step 1: understanding the range for which "blocks" are designed

Forearms blocks are designed to be applied in the melee range - ie. the range where most civilian defence encounters play out. This is the "toe to toe" range that combat sports practitioners enter for brief, furious, exchanges. In this range a punch from either side can land. Half a step in gives you elbow and standing grappling range while half a step out gives you full kicking range. It is within this volatile and dangerous range that forearms come into their own as defensive tools.

To understand why this is so, the first thing one needs to consider is the position in which hands are likely to be held in the melee range - which is the bareknuckle guard.

This is typically held further out from the face than in combat sports. Why? For 2 reasons:


I discuss the use of forearms, as opposed to palms, for blocking 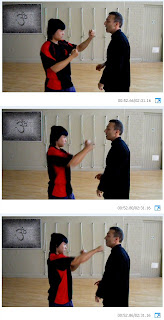 Having established that you are likely to be in the melee range with your guard away from your face, the next thing to look at is reaction time. It takes most young adults at least 0.2 second to react to an attack. In fact, if you look at the video above at around 0:53, you'll note my student Yi throwing a punch at me without me expecting it. I've slowed it down by the millisecond and noted when I start to flinch. My flinch reaction starts at exactly 0.17 sec after the attack begins. In the adjacent image you will note that at 0.2 sec the movement of my head in the flinch reaction is just noticeable. 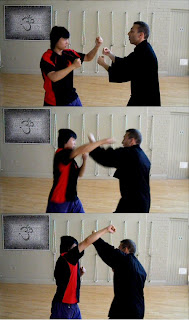 In that 0.2 sec my student's fist has travelled quite a long way towards my head - over 3/4 of the way. And here's the crunch:

When your guard is up in the bareknuckle way, your attacker's fist will be well past your own hands by the time you react.

What this means is that you simply don't have time to pull your hand back and use it to deflect or parry the punch down.

Your forearm is, however, ideally placed to deflect the attack, as you will see from the adjacent images. Contrary to some views expressed on the internet, you don't need to be The Flash to use a forearm or other deflection. You forearm only needs to move a matter of an inch or so to deflect a punch. Given that you have only a fraction of a second to react, this is a good thing.

The added bonus of using a forearm for deflection is that you have a greater deflection surface. The palm is relatively small and it is easy to miss a punch, particularly if you're trying to pick the attack off at the last moment by targeting the fist. The forearm is, by contrast, a large and forgiving surface that operates by deflecting your attacker's equally large and accommodating forearm.

Another benefit in using the forearm as opposed to the palm is that of structural strength. By this I am not referring to the potential to "break something" when blocking. Rather, I am talking about the ability of a particular body part to act as a strong and stable fulcrum for deflecting attacks.

It is a biomechanical fact that the closer you come to your body's core, the stronger the structure. So a forearm will necessarily provide a more stable fulcrum for deflecting attacks than a palm which is at the extremity of your body. A door serves as a good analogy here: if you want to open a door it is very much harder to do so by pushing at the hinge than it is pushing at the handle. Similarly, your palm/hand can be moved very easily by a strong force, where your forearm will be far less resistant to that force.

So what accounts for the popularity of palm deflections over forearm ones? I think "soft" distance sparring bears a lot of responsibility. When you're bouncing up and down, darting in with shallow penetration "tag" punches, forearm blocks become a non issue. At that range they are, quite simply, impossible. Any attempt to use the forearm invariably results in catching attacks at the fist or wrist - not in the "Goldilocks zone" which is mid-forearm.

By contrast, palm deflections remain viable in such distance sparring, hence their ascendancy.

However you need to be aware that what works in a light-contact distance sparring environment will not always work against committed, melee range blows with full penetration. I have personally reverted to forearm blocks when attempts at palm blocks have resulted in me being pummelled. You need to put the feedback of light sparring in perspective, otherwise it can be quite misleading.


A video showing the sport karate reverse punch. Note the distance from the target and the shallow penetration of the punch - both quite unlike real confrontations in the melee. The shallow depth of the punch means the demonstrator doesn't even have to form a proper fist. Forearm blocks have no real application to sport karate of this kind (where they have application in karate as a civilian defence art).

I don't want to give the impression that palm/hand deflections are not useful. They are, and I use them all the time. They are particularly useful at a greater range or when you are using them to trap and control. In the latter case you need the finesse and fine motor skills your palms afford. However forearm deflections are supremely useful too - especially in the tight melee range of civilian defence encounters. It is there, when your guard is passed, that you will find the need to use your forearms to intercept and deflect incoming attacks.