September 30, 2012
I've had it suggested to me that in order to practise locks safely, it might be necessary to vary them slightly. 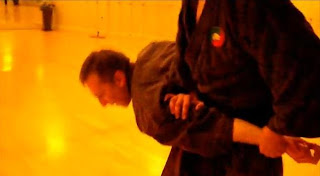 A specific example given to me was that which I have previously covered in relation to the ikkyo projection, namely that application of pressure on the tricep rather than the elbow. It was argued that while this is not effective in unbalancing and holding an opponent, it might nonetheless be a viable training method because it precludes injury – injury that is all too easily inflicted on the elbow joint.

I hold to the view that there is no merit in this position. In fact, I would go further and argue that it is positively dangerous to apply this or any other lock incorrectly "for safety". Why?

First things first: I don't believe it is ever a good idea to train to "miss". I've previously covered this issue in relation to punching/striking/kicking, but the same applies to locking and holding. If you train to "miss" your lock, this is precisely what you can expect in real life. Under pressure you make errors in greater, not fewer, numbers so you need to train for the most accurate and effective technique possible. Only then can you expect some of that accuracy and effectiveness to survive the "adrenaline dump" and other factors that affect (perhaps overwhelm) your reaction under pressure.

Metaphorically speaking, you just don't have time to "take your gloves off" in a real confrontation. Things happen far too quickly for conscious thought. You don't have the luxury of making the mental and physical adjustment needed to move your grip a centimetre or two this way or that along your opponent's arm. Instead (if you're suitably trained and, let's be frank, lucky) the best you can hope for is to default to what you've done time and time again in class. 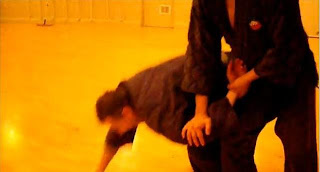 Is this safer? In training – possibly (subject to a big qualification I am about to make). But in combat it is anything but safe. "Missing" your lock, punch, strike or kick because you're defaulting to what you do in class might well cost you life or limb.

I don't know if I've mentioned it before, but a good friend of mine used to train in a karate dojo where they used to spar with fully extended punches that were always out of range. This was a "safety measure", they said. It so happened that my friend was attacked by someone. He was so used to punches missing that he failed to take any defensive action against a punch – and it hit him in the eye, causing him a serious injury.

Despite the initial blow, my friend continued to fight – but a second consequence of his training emerged: every time he threw a punch, he found it was out of range. As he later explained to me, the best he managed was a mere "touch". So "missing" in training cost him both in terms of defence and attack. Luckily for my friend, his attacker was pulled away by others. But the swelling around his eye was so bad he didn't see out of it for months.

So you shouldn't miss your punches/strikes and kicks. Why should the situation be any different when it comes to locks and grappling generally?

And here we come to the qualification I mentioned earlier: I have grave reservations as to the "safety" of missing even in training. I discuss my reasoning below at 6:50 (the embedded video is set to start at the correct point):


A video in which I discuss, among other things, the safe practice of locks (see from 6:50 onwards – video set to start at the correct point).

Essentially it comes down to this: if you train to "miss", sooner or later the your partner will make adjustments to accommodate that "miss". These adjustments will cause you to make certain adjustments, and so on. What happens when force or speed is applied in practice – and one of the many adjustments "goes wrong"? Let's just say that it might not be pretty.

I'm reminded of another example involving striking: my instructor Bob Davies always used to say that when teaching beginners you should teach direction first, then distancing. So the first thing you correct in a beginner's punch is the inevitable tendency to alter the direction – ie. a deliberate "swerve" away from his or her partner. Once you have ensured their direction is suitably correct, you should start to correct distancing (in my experience this will usually mean closing the gap so that the beginners are actually in range - rarely the reverse!).

What happens if you don't follow Bob's advice? Well, a failure to correct direction will give your students false feedback:

The defender will wrongly assume that his or her deflection/evasion has been successful on its own merits and get a false sense of security/confidence. The attacker will learn to punch off-course. At the same time, distancing will no longer be corrected: after all if the punch is on the wrong trajectory, whether it is in or out of range never becomes an issue. In other words, the attacker will learn to miss.

So what happens if students who practice this way make a mistake (eg. the defender accidentally steps the wrong way during fast practice – straight into a punch that was intended to miss)? If the distancing is out, there will be no consequence. But if the distancing happens to be correct, the result can be as catastrophic as it is uncontrolled and unexpected.

In fact, this is precisely what happened in my instructor's dojo one day. We were preparing for a demonstration and a fellow in our team kept missing: his punches were sufficiently "deep" but they were always wide of the target. Our senior told the fellow to stop missing – to punch for the centre line and leave it to the defender to deal with the attack. The fellow didn't listen. Sure enough, the defender made a mistake under pressure and BAM – walked right into the fellow's knuckles which caused some nasty swelling to the defender's mouth and chipped his teeth. Our senior was not amused. 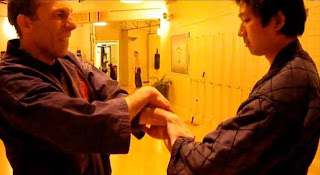 So back to locks. What happens when you "miss" them? Well let's consider for example the humble "nikkyo" or "xiao chan". People think of it as a simple pain compliance lock. But the fact that it hurts like hell should give you fair warning about what it can do: with sufficient force, the lock can cause some nasty damage to your opponent's wrist joint. Why? Because the angle is such that the joint cannot withstand force to any extent. That is why so little force is needed to generate pain. If you didn't go for "pain compliance" but simply focussed on exerting great pressure and doing so suddenly and quickly, you'd find out soon enough how damaging the technique could be.

This is precisely why I never practise nikkyo/xiao chan with any substantial speed or pressure. In other words, I never apply this lock with an abrupt "jerk". It is all too easy to go a bit too far and cause injury to my partner. Instead I apply it gradually and with as little pressure as I have to. If I can't apply the lock with minimal pressure, I know that the angle is incorrect. So I adjust and try again. Over time I get more and more aware of the correct angles and pressure and this permits me to incorporate it into more and more resistant drills and eventually into hard sparring.

Now imagine for a minute if a school taught its students to perform the technique with the angle "just off" so that the lock was "safe": invariably the students would try to get some feedback by adding brute force. And indeed, the brute force might well provide some feedback. But what would happen if, accidentally, the lock slipped into its optimum (damaging) position just as that brute force was applied? It might be very ugly. 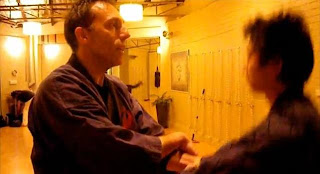 So locks are no different to punches, strikes and kicks. You can't train to miss. You have to do your level best to train the technique as correctly as possible.

What you can and should do in the name of safety is vary the intensity and tempo. Both of these increase naturally as your own adrenaline surges, so it is okay to train this way. Besides, if you want to train safely, you don't have any other choice.