September 29, 2012
I have previously written about the ikkyo "projection" and how it compares to the throw or projection one finds in, say, xingyi (as an application of pi quan). In that article I noted various methods of ikkyo that I considered to be "mistakes" – and ways of making the projection more efficient, regardless of your school/style. 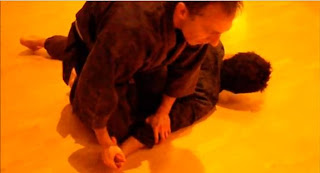 However aikido practitioners will be aware that what is called "ikkyo" has 2 facets, namely the projection and a ground pin. It is the latter that I propose to cover briefly in this post.

Before I go any further I want to make it clear that I am not averse to students learning the traditional ikkyo ground pin; it teaches some valuable lessons about locking the elbow, including the need to keep pressure at a point just behind the joint, perform a correct twist of the wrist and maintain the correct angle of the arm to the body. As a "first step" it isn't a bad lesson at all.

However it is important to note that this "first lesson" is not a practical fighting technique. It is "high on principle, low on practicality". I have experimented over the years and found that it is nigh-on impossible to hold someone with an ikkyo ground pin if they don't want to be held.

Even if they consent to being placed in the optimal position for you to hold them, they invariably manage to wiggle free or turn around to smack you with an elbow. This is to say nothing of the difficulty in attaining the traditional ikkyo ground position to begin with: adrenaline and obstinate resistance conspire to make it very difficult indeed for someone to effect anything approaching an ikkyo ground pin - ie. with your opponent flat on his/her stomach, their arm stretched out to the side. 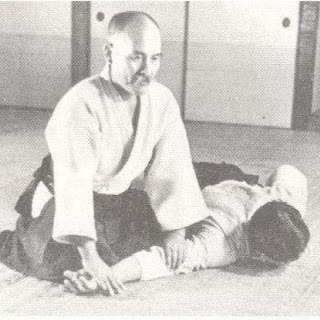 Yes, it is possible to hold someone using such a pin – but your technique must be pretty much perfect. And even then, I'm not sure you'll be able to maintain that position for very long - even in the most optimal position.

As a matter of interest, that optimal position is as follows: your opponent's arm must be out at more than 90 degrees, one of your knees must be pushed right into your opponent's armpit and the other must be right up against their forearm. Your opponent's elbow must be held absolutely flat by applying pressure at a point just behind the joint. The wrist can be twisted around and towards your opponent to add a lever factor to the lock.

I was beastly careless about my standard ikkyo form in the video, so please understand that I am aware of these details - I just haven't found that they make enough difference to a resistant opponent! They are important however to understanding broader principles and effect other locks substantially.

So what are the issues with ikkyo?


A video in which I discuss, among other things, the ikkyo ground pin (see from 3:30 onwards – video set to start at the correct point).

Well first, you'll note from my article "Elbow locks: Part 1", maintaining any sort of lock on the elbow with one's palm is problematic. I won't go into the reasons again here; I'll leave it to you to read that article. For the present purposes it suffices for me to note that palm pressure is a very poor way of locking someone's elbow.

The second issue is that it is extremely hard to attain the necessary position (ie. an arm outstretched on the floor) in a resistant environment. People are continually moving their arms, bending and alternately straightening. 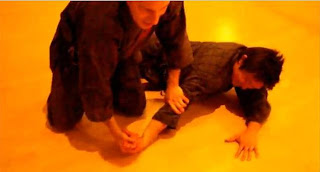 In order to trap and control a limb, you generally need some larger body part to be employed in the lock (eg. the legs, both arms pulling the elbow in a juji gatame etc.) in a way that traps the arm, then uses the whole body to torque it straight. Using just your palms against a slippery, writhing arm is very hit and miss.

You might make be able it work – but you'd have to have reflexes and technique second to none.

The third issue flows directly from the previous ones: in order to hold a person solidly on the ground, you generally need to employ your full bodyweight. Yes, it might be argued that you can channel your bodyweight through your arms. But the truth of the matter is that in the traditional ikkyo ground pin your bodyweight is raised and supported at at least four (more accurately 6) points – only one of which is directly controlling a "pinning point" (your partner's elbow) and only one other of which is even touching the body (the wrist twist lever).

By contrast, in my experience, any ground technique requires a degree of body-to-body contact, with your centre of gravity kept low and centred directly over the relevant "pinning point". 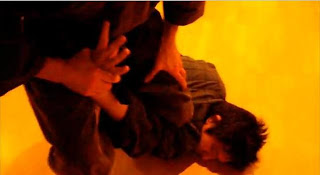 The ikkyo ground pin does not meet these requirements.

So what should you do if you want to hold someone with an "ikkyo-like" pin?

Essentially, my suggestion is that you take your bodyweight directly into your opponent – not to the side. Instead of kneeling next to your opponent, I suggest you kneel directly on him/her. 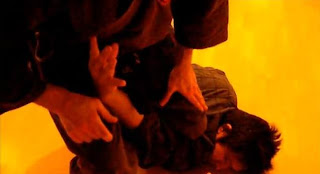 For this purpose you should put one knee directly into the back of the shoulder joint, the other in a crouch next to it. This direct body-to-body weight is vital in keeping your opponent securely pinned the floor.

Your opponent's elbow can then be locked straight with support from both your legs (as shown in the adjacent picture) and the standard wrist wist can then be employed to add more lever factor (and pain!) to the hold.

You'll note that having the arm raised more or less above the shoulder means that any pressure exerted by twisting the wrist around and down will spiral into the same point on the ground. In other words, you won't be spreading your weight over "non-pinning" areas. 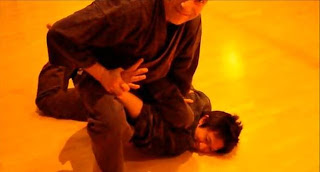 Not only is this stronger than the standard ikkyo pin, but it is also requires less energy to hold. This means you can hold your opponent for longer – which is precisely what you might wish to do if you're waiting for the police etc.

Last, but not least, my suggested "ikkyo pin" permits an easy transition to a standing posture in case your opponent has accomplices. The need to be mobile is paramount in any street confrontation and I can't see that this objective is achieved by a full kneeling posture - particularly in the case of most Westerners, but regardless of your flexibility and strength in that position.