Corner stones of a "softer" method

In my upcoming seminar on the half hard, half soft art of Hong Yi Xiang, I will be concentrating on various "internal" or "soft" elements - and marrying these with the more familiar "external" or "hard" elements.  I hope to do this by using form - and extrapolating to function.  This should also give participants a good idea of why the heck one should bother with traditional forms or "kata" in the first place.

So what are some of these "soft" elements?

Well as I've discussed many times before they have precious little to do with qi/chi balls or paranormal powers.  Instead I'm going to cover some of the more subtle, but very useful, skills of grounding, movement/evasion (including footwork) and deflection/interception/entry that are actually quite counter-intuitive at first glance, yet obviously practical and simple at the second: concepts that make sense in a civilian defence environment and even in the cage/ring (as my students have found).

I have previously discussed the battle stance of xingyi - santshi or "zhan bu".  Of course, as you will see from my article, the stance is used extensively in Hong's bridging forms - along with a healthy mix of other stances more familiar to the external artist.

Keeping you out of the grappling range

A related issue to which I allude in my article on the xingyi stance is the question of civilian defence grappling - or rather non-grappling: the need to stay out of the full grappling range.

The battle stance is ideal for this purpose - and is used appropriately.  In the seminar I will be discussing a number of other, related and complementary strategies the forms employ to keep you moving in a way that avoids the clinch or greater grappling entanglement.

I have used these successfully for decades to deal with shoots and other grappling attempts.  Obviously nothing works every time: no approach has any kind of guarantee. But the methods employed in Hong's forms work well enough for me: they have been my go-to for avoiding being taken down when I don't want to go down - precisely because they keep the requisite "buffer" between you and your opponent at all times, without sacrificing your ability to land blows with force. 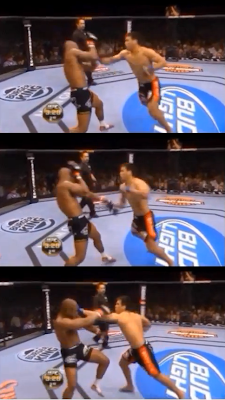 So far I've covered defence as a kind of major issue but what most people really want (rightly or wrongly) is force multiplication.  Lucky for them, Hong's forms have lots of tips in that regard, the top one being a fairly cool and unobtrusive way of developing the optimal hand and foot timing - so as to maximise the use of your body momentum behind each punch/kick and accordingly your force.

I have covered the importance of this in previous articles, particularly this one, so I won't go over the same ground.  What I will remind you is that you see it happen all the time in the octagon - so why would you do things any differently in your own stepping/punching?

I will also reiterate one very salient point I made in my previous articles: just how hard it is to learn this kind of stepping.  "It seems so easy" people say.  Until they get video taken of them trying it and see just how far short of the mark they have fallen.

Why do I repeat this warning?  For one very good reason: as I've discovered, Hong's forms make timing your step with your punch an absolute breeze.  Indeed, I can tell how Hong modified standard xingyi techniques so as to make the optimal timing intuitive, rather than counter-intuitive.  In my view Hong's material is worth learning for this reason, if no other. 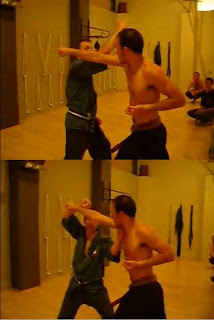 I've previously gone on at length about the need to understand that no deflection and counter are truly "simultaneous". Regardless, Hong's bridging forms come pretty darn close to the mark.  There is virtually none of the "one, two" or "block and counter" you see in the typical external form: almost every single deflection feeds directly into a counter - or is a counter itself (immediately upon completing its deflection/interception).

Most of the techniques in Hong's forms contain a kind of "block and punch in one movement", but others turn the deflecting arm into an indirect attack at the last second in a very surprising way.

In yet other cases, the techniques use of a kind of "rolling progression" where one defensive technique feeds into another offensive one using a circular momentum.  This is a big part of Hong's forms and not only creates an effective "wheel-like" circle of deflection, it also uses the centrifugal force of that circle as a force multiplier, so that the final counter is delivered with more force that would otherwise be available.

I've taken one such movement straight out of Hong's material and applied it in the drill below, particularly the end when you see the backfist application.

Last, one of the topics I propose to cover is Hong's "indirect fist" concept: where attacks you've launched along one particular line can be "re-routed" when resistance is encountered.  This can be used in conjunction with defences, as I alluded to above, or it can simply be a means of "worming" your way around obstacles (like your opponent's guard) to deliver a potent counter to your opponent.

Su Dong Chen, one of Hong's most senior students, illustrates the principle below.

Of course, these are just some thoughts off the top of my head.  I tend to teach quite "organically" and I'm sure I will cover a great number of other issues/methods unique to these forms - as they come to mind.

For those in Perth, I hope to see you at the seminar (details are here).  For those who can't make it, I'll be sure to put elements of it up on the net, as is my custom!