Half internal half external forms: 1

For a long time I've wanted to do a piece on what have sometimes been termed "bridging forms" - forms that help students transition from the external arts to the internal arts.

The problem (or blessing - depending on how you look at it) is that none of the 5 or so "bridging forms" I know are in any sense a "bridge" from anywhere to anywhere.  They are a combination.  They combine features of the internal arts and external arts. That's all.

Personally I think this is deliberate.  And functional.  They don't need to be a "bridge" to anything.  They work perfectly well on their own.  They are just a combination of "hard" and "soft".  To think anything otherwise is to imagine that "soft" is better than "hard" - instead of realising, as Chen Pan Ling did, that the best fighter will use an appropriate combination of hard and soft techniques to achieve an optimal result.  In other words, the answer never lies at an extreme.  You must not be too reliant on physical force.  But if you concentrate all your efforts on "pliability", "relaxed movement", "pinpoint timing" etc. and fail to recognise the need for a bit of "oomph" you won't be able to fight your way out of a wet paper bag.  You'll have a head full of techniques of which you can apply approximately zero (which might lead you to becoming a fajin fantasist!),

The first of the forms I wanted to highlight in this series is one designed by Hong Yi Xiang, student of my own grandmaster Chen Pan Ling.

Here is the form.  You'll note the clear mix of shaolin (almost karate-style) hard techniques like triple punches in front stance, mixed together with xingyi like stances and footwork.

The video at the end shows the applications in their entirety, but I thought these gifs would suffice as a brief run-through:

The opening move seems a bit daft to some. Indeed, I had one chap write to say that "ideally your block should go one way and your head the other".  But this assumes that you will always get the ideal.

What I like about this form, right from the opening move, is that it teaches you how to deal with positions you'd rather not be in.  And completely subverts many of the assumptions you might have been making about what is "workable" and what isn't!

The downward blocks shown in the form always cop criticism.  "Don't drop your arms" you're relentlessly told. Well it just so happens that this is another "golden rule" that isn't quite so "golden".  Consider that Steve here is going for a kick to my thigh and is totally focused on the kick.  Yes, I drop my guard to jam his thigh.  But unless Steve is very very good at feinting, I will have plenty of time to deal with the kick with my dropped arm: he won't be throwing a punch at the same time as his kick is foiled - there is always a gap in timing.

The "tiger mouth" movements at the start of the form look nothing less than comical to some.  Yet they actually hide a wonderful bit of subtle wisdom: a soft, curved rising deflection that I've found works against pretty much any angle of punch.

I've tested this with full power punches intended to land.  I did so yesterday.  I have a busted face.  But it wasn't because of this technique!  It worked - as it always has.

I don't propose to say too much about the "hou tien" techniques - the horizontal strikes to the solar plexus or kidneys - other than that they use the whole body and rely on the entire forearm and not just the whip of the backfist.

These techniques are also reliant on the "load" of the body using the twisted stance.  In the video at the end, you can get some sense of the importance of the detail in the form - why the pulback hand rises as you load for the hou tien.

The rising block is Hong's favourite - the "steeple" I've covered elsewhere.  It's followed by the humble "soto uke" (the inward block).

Against a "one-two" it really is a great response.

You might find the "inverted pressing" palms of Hong's "bridging forms" quite perplexing. But this exchange shows how effective the move is intercepting punches and deflecting them using a "wedge". Note the follow up deflection in the form sequence - a downward sweep - which deals with a powerful follow up punch after the jab - a right cross.

The sequence is followed by a kick - shown somewhat artificially here (because I've isolated the technique from its full sequence).

While it might seem a tad complex, I find this little sequence to be absolutely beautiful in its "predictive" ability.  Note that it allows for a third punch by Jeff as he retreats.

I won't go through the detail - the video at the end does that in (some might say excessive) detail.  But to me, this is magic.  Love this sort of stuff.  I find bits coming out in sparring and it makes me smile.

Here's a bit of detail on the "elbow smash" and what comes just before.  You have to be careful in practise, but the upward deflection should be executed with a forceful inverted knife hand carotid strike.

I pause a bit between the strike and the grab in order to make it clearer - where in other examples it just looks like I've gone for a straight grab and smash.  If you do it fast, you miss the "magic" of not only the upward knife hand deflection, but the carotid strike.

Hong's simplest bridging form is this one - "Five Tigers".  But really it is a work of genius.
Virtually everyone from Hong's former school (Tang Shou Dao) has abandoned the practise of this form and its sister form Da Peng Zhan Chi, citing it as something "for schoolkids".  The truth is, the forms have so many subtleties that I can't count them.  In this sequence alone, the movement allows for continuous attack with multiple attacks, while simultaneously allowing for (and intercepting/evading) likely responses.

Even the turn at the end is pure genius.  What looks like a basic way to turn around is actually a sophisticated way to avoid a grapple.

This concept is expanded upon in the next form, Da Peng Zhan Chi, but even here it is elegant and powerful.

Hong was well aware of the dangers of being grappled or clinched in a civilian defence scenario.  Like all great masters he based his system on "anti-grappling" - grappling using civilian defence methods intended to pull you out of entanglement - not those that led to your own entanglement with a single opponent (which could be disasterous).

The video showing the applications in some detail are shown below.

I've had some commentary that the video is "to booring because it is so long".  Well I'm sorry that my attempt at recording all that I remember about this form within a single hour lesson, without any rehearsal, makes for poor YouTube viewing.  Maybe if it weren't provided for free, people like this might view the information differently - even if they didn't agree with all the contents?

I have previously written about how the internal arts have "advanced" features.  By this, I meant that they had features that required significant skill to "pull off" under resistant conditions.  I did not mean that they were "better".

Indeed, I subscribe to the view that often the simplest technique is the best.

So why learn something "advanced"?

Because we, as martial artists, should be constantly striving to improve ourselves.  We should be moving towards greater refinement, greater skill, greater understanding.  Why?  Well if you're like me, you're not getting any younger and you want to rely more on subtle skills, efficient movement and predictive, minimalist movement - even if that requires a great deal of skill to pull off.

In other words, not only can we fairly assume that we will inevitably be caught in a situation where our "basic" movements are not enough, we have a higher reason for pursuing advancement - gong fu: skill acquired through great effort.

To my mind, Hong's "bridging forms" are not "bridges" to anything.  They are fusions.  They are forms that stand on their own.

Hong himself denigrated them as "material for kids".  But I can't help but see this as part of the natural inclination to put down that which one creates oneself.  It can't possibly be as "great" as what the old masters created - can it?  And if you subscribe to a "soft is 'better' than hard" mentality, you'll have to justify the combination of soft and hard as something 'lesser' - something "inferior".

But as I'm sure you'll agree - whatever your view on this form and its sister form, Da Pen Zhan Chi, there is nothing "basic" about this material and it is in no way "suitable for children".  It is as complex as anything out there. 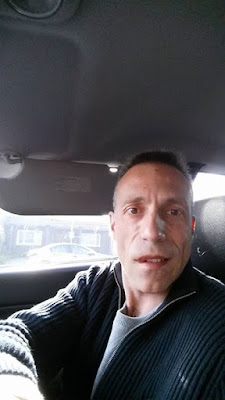 I'm going to go out on a limb and say that it presents a kind of pinnacle of Hong's own development - of his understanding of where hard and soft meet, somewhere in the middle, to make something work optimally.

[For those interested, I'm holding a seminar in Perth on this form and others on 4 October 2015.]

1. It's interesting to note that in testing these applications in free form fighting,  I had my face smashed a bit.  I have 3 loose teeth and woke up this morning with half my lips swollen and blue.  It's a reminder that, to quote my student Steve, "We aren't playing cards."

(The photo on the right was taken only an hour later - my face is regally blue now!)

But what failed wasn't some fancy application.  It was the simplest, most conservative technique I could try.  I just mistimed it.