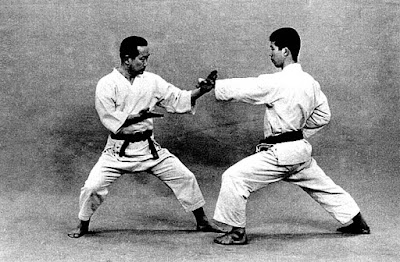 Over the last 2 decades I've noticed an explosion of interest in karate in "bunkai" - applications of karate's kata (forms).  There was a time (in the not too distant past) where karate had stagnated badly.  Kata were practised almost in a vacuum: forms as a series of movements and no analysis on one hand - sparring or two person drills with no nexus to the kata on the other.  This seemed to be the case since karate became popularised in Japan in the 1930s and was diluted for teaching to school kids.  It only got worse in the 1950s and 60s when it spread to the West.

By the 1980s I noticed a few teachers trying to claw the way back to bunkai as the primary source of karate knowledge.  As just one example, Higaonna Morio sensei of goju ryu released his 8mm and later video tapes of kata and applications.  Meanwhile, other teachers, like Hirokazu Kanazawa sensei of SKI shotokan, handled the dilemma in a totally different way, cataloging hundreds of two person sparring drills that ran parallel to the kata.

But in the mid to late 1990s it seemed the kata bunkai method started to go mainstream.  Since then it has snowballed.

Now in the YouTube era, every man and his dog has kata applications up for all to see.  Obviously I'm one of those men with dogs.

But one thing seems to be largely unchanged from that period of "bunkai stagnation": overwhelmingly, applications are applied against a single straight punch.

And it's usually still a leading lunge step punch.  After all these years.

In this regard I think karate has at least some high ground over many gong fu schools where applications run form "hand crossing/touching"; or from arts like aikido where applications are against wrist grabs or bizarre "downward chops" - all launched by someone charging from across the other side of the room; or from arts like American kenpo where techniques are often commenced from some totally innocuous, zombie-like movements, like a slow hand on the shoulder (leading to an attack string of such overkill that it would make Master Ken's "restomp the groin" look tame). 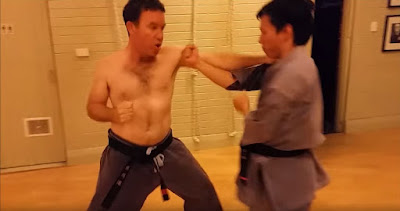 Ignoring the whole "you don't have an attacker at all issue", here's the thing: people don't attack with lunge punches.  They just don't.

Some modern masters have gone a step further.  Patrick McCarthy sensei has pioneered a new direction with his "HAPV" (Habitual Acts of Personal Violence) analysis - examining bunkai from the perspective of the kinds of attacks humans "habitually" perpetrate.  Whether or not you agree with his choice of what are "habitual" attacks, there is no denying that McCarthy sensei has lead the charge with an intelligent reform of karate bunkai analysis.

Others like Iain Abernethy and Kris Wilder have done their own research in this direction.

But most karate bunkai I see on the internet still base bunkai analysis overwhelmingly on a single attack - and usually a lunge punch.  Yet, as my MMA student Armando often says, people don't tend to attack with just one punch or other technique.  Sure, they will launch an initial attack.  But more often than not they will throw a second and third etc.

In other words, you have to prepare to face combinations.

Over the last 10 years or so I've made it my special mission to examine kata techniques to see how they work against combinations - whether it is a "one-two" punch combination, or a kick followed by a punch - or anything else for that matter!

Indeed, I don't really do any applications at all without considering what the attacker might do as a follow up.  In other words, I always take into account the most likely follow-on attack.  I always assume that at least two attacks will be thrown at me in succession - often more.

I never assume there will be one attack and only one attack.

And I've discovered that kata inevitably work very, very well in dealing with multiple, consecutive attacks.  Every time I come to a kata application, I look at the initial defence and wonder what attack it could be defending against.  Then I think what follow-on I'd throw if I were initiating the attack.

So here are some videos taken from just one recent class where we ran through some kata bunkai analysis:

Consider this defence from gekisai (ichi or ni) kata to a one-two punch combination:

I think it's self-explanatory, so I won't go into any sort of discussion here.

Here's another one: a defence against a low roundhouse - followed by a reverse punch once the kick has been thwarted:

Now this one needs a bit more explanation. I've had a number of people already say to me that "it's a bad idea to put hand down exposing face for right hook or cross﻿."

I see this as a variation on the "don't drop your hands to block kicks as you will expose your upper body to attack" argument, which I've already dealt with comprehensively in my articles (in particular "Low blocks against kicks - are they ridiculous?").

Yes, it's partially true: lowering your hands is always risky.  But those who voice this concern forget that your hands are moving constantly in fighting.  They forget that everything you do leaves an opening - attack, defence... all of them.

In the end, it's all about choice and being aware of what your'e doing.  The technique I've shown here is a conscious choice.  As you can see, you take a calculated risk, but then again, this is a risk you can take because 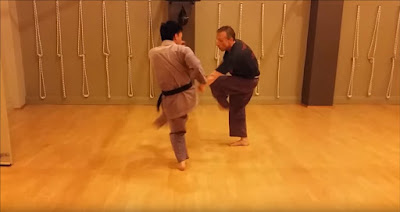 Also my students in the last part are not doing enough body movement sideways to take them away from the right cross.  Remember that kicks have a longer range than punches.  The side movement in saifa takes you away from the right cross.  The only danger (hand wise) comes from the left - which is the logical hand to punch with after a right swinging kick (you've wound up the right side, not your left) - and is the only punch you could launch simultaneously - which is precisely why your left high sukui happens simultaneously with the low hand.

In any event, the movement in the kata will always have risks because one hand is dropping.  So long as you remain in some sort of range, dropping one arm is problematic.  That is why there is sideways movement (which the students at the end don't show - but then again, this is just class footage as they were learning, and I think they did very well!).﻿

The last video below is another defence against a one-two punch combination - perhaps followed by a third punch.  It's from the kata seiunchin.

The salient feature of this bunkai is that it incorporates (shock horror) a duck/weave.  You'll note my discussion that the move is small and reverts so quickly to a vertical posture that it is unsurprising that it would not be visible in the kata: particularly when traditional evasion prioritises keeping your posture/balance intact at all times due to the vagaries of street conditions (uneven, hard surfaces, objects, multiple opponents etc.).

You'll also note that the technique uses the "sukui uke" (scooping block) featured in my previous article "Blocking the jab".  This should make it clear that any "jab" won't be defended with just a "block" but also with some element of evasion (in this case a drop/backwards movement into shiko dachi (horse stance).  The old "blocks don't work because you don't use evasion" is another straw man - all "blocks" in karate kata are accompanied by some sort of evasion.  Even if it is not shown literally in the movement it is usually necessarily implicit if one understands how the kata is structured and why.

Basically, all our kata bunkai start with this assumption: that there will be a follow up attack.

So the next time someone shows you an application of a karate kata technique, ask yourself: "Would someone really attack this way - and if they did, would they just stop there?"  Answering these questions might just be the key to unlocking karate as a truly applicable fighting art in the modern age.