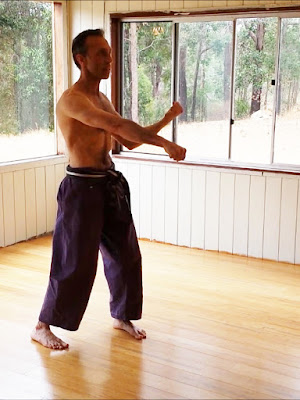 The first reaction I tend to get from more mature students is one of horror.  I guess that is understandable: the older I get, the less I like the idea of having keep up with 20-somethings.  I guess I feel a bit like some ancient police sergeant having to do an obstacle course in under a certain time.

There are the usual arguments I face - like "I'm learning martial arts skills - not training to be an MMA fighter, a law enforcement officer or soldier.  Why the heck do I need some kind of physical test?"

We have plenty of students who train in our non-grading classes - in particular my Chinese arts class.  There we don't have any gradings at all.  I teach certain techniques and coach students in developing their skill in these techniques.  And all of this is done without any reference to a particular physical "standard" or goal - other than the general aim of helping the student feel mentally and physically healthier - creating a more positive, active lifestyle.

But there are plenty of students who want to be part of the grading system in a functional, practical civilian defence art.  And for those students - students who actively want to be assessed as meeting certain targets - a physical activity like a martial art necessarily involves certain minimums in terms of physical conditioning.

We believe that if you are so out of shape that you can't go into a stance at all, or do a kick, you can't really say you've met the requirements for a particular grade.

Within this context it is important to note that modifications are always made for those who are older or who have disabilities.  We aren't trying to build superheros.  We're trying to maintain a standard that gives a grade some meaning.

I'm reminded of the time I went to Ray Hana's Superstore years ago.  A boxer came in to buy some equipment and we got to chatting.

He had a very good point.  We spent some more time talking about the necessity for fitness: how the average person training in a boxing gym (even the so-called "white collar" boxers) are far fitter than the average suburban karate/taekwondo/jujutsu/gongfu practitioners, some of whom spend virtually no time raising a sweat during training. 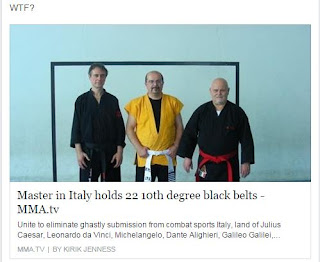 These people can hardly call themselves "fighters".  The problem is, many do.  A cursory glance at YouTube will show you hundreds of thousands of fantasists in all martial arts - people with a 10th dan  (or 'duan') in dozens of styles.  Heck, sometimes they boast an 11th dan/duan.  Shades of the movie 'This is Spinal Tap'...

Inevitably they are middle-aged, totally out of shape people who can barely raise an arm or leg.  Indeed, I'm sure many have never even done the "hard yards" (I understand how some old masters lose conditioning - but more than a few of these guys look like they have never been in shape in the first place).  In the case of these 'masters', their list of 'impressive' titles and grades means diddly squat.

Which brings me to our physical prerequisites.  In our school we have chosen 3 benchmark exercises to test whether or not a grading candidate can meet the physical minimum for the particular grade.

It is important to note that these exercises are not the sum total of the physical conditioning required in our gradings.  Our gradings go for a few hours and have their own challenges, including sparring with multiple consecutive partners and performing physically demanding techniques and forms. Rather, the physical exercises (usually done at the end of the grading) are merely benchmark tests for strength and endurance in certain muscle groups - carefully chosen for practical use, and relying on your own body weight as a testing device.

As I said, we're not trying to make supermen/women.  We're looking to make sure the candidate has sufficient strength and endurance to actually do the techniques required at that grade - and do them under a bit of pressure.

This doesn't mean one needs to have '6 pack abs' or bulging biceps.  It just means that you have some sort of base level fitness for the task you're required to perform.

This is where I part company with that boxer.  Back in the day he asked me this question, I was a lot fitter.  In fact, I was doing skipping with my obi (belt) which, as anyone who has tried will tell you, is difficult: the belt is wide and catches the air slowing it down and making you work harder to swing it, particularly with double skips.  At the time I was actually trying to build up my double skips and got to 21 without faulting.  (Of course my friend Jeff came along the next lesson and on his second attempt did 36 - which made me give up my quest to set records in that regard!)

But a martial artist training for civilian defence is not facing the same demands as a boxer.  The civilian defence practitioner doesn't need to last 15 three minute rounds.  He or she just needs to be able to survive bursts of fighting in an attack.  This means the student needs a specific kind of fitness - and our gradings are designed to test not only your skill in technique, but also whether you have that kind of fitness (scaled, depending on the grade you're trying to attain).

In other words, we're trying to set a minimum base standard of strength and endurance in certain muscles with the concept of martial usability in mind.  Notice I mention both strength and endurance: we aren't after strength or endurance alone, but a mix of both: a kind of conditioning that is applicable to anaerobic environments like those encountered during bursts of furious fighting and when dealing with adrenaline dump etc.


So what are our benchmark exercises?

As foreshadowed, we test chest and (pushing) arm strength and endurance using your own body weight via push ups.  Since women and men typically have a different ratio of muscle to fat, women are permitted to have their knees on the floor.  The requirement starts low and peaks at 50 for shodan (1st dan black belt).  It stays there until godan (5th dan).  Otherwise it's embarrassing (and pointless) to have a 30 year old 3rd or 4th dan who can't do 5 push ups (never mind 50).  What the heck is that?

We test back and (pulling) arm strength and endurance using your own body weight via rope or inverted stick pull ups (where two people hold a stick/pole and you lie down between them, grab the stick/pole and pull yourself up).  Chin ups might seem like a good idea for a generalised test, but in my experience they are way too hard for most people.  Again - we're not trying to create superheros.  The requirement for these peaks at 35 for shodan to godan.

The last thing we test is core/abdominal strength and endurance.  For this we use a double crunch exercise we call the "ab blaster".  The requirement peaks at 10 x the sequence of 6 crunches (ie. 60) for shodan to godan.

Our prerequisite exercises.  Note that the pull ups can also be
done on the ropes on the walls - but not everyone has these.

Legs are not subject to a specific physical prerequisite, since the students do enough squatting and other low stances and movement during the grading to reveal whether they have sufficient leg strength and endurance.

After 5th dan the grades are honorary and are really based on your martial knowledge, teaching and contribution so there is no formal physical prerequisite.

The other day, I undertook our black belt physical prerequisite requirements on a random training night. All black belts in our system are required (barring injury or illness - and taking into account age) to be able to meet our prerequisite - any time, any place. No excuses.

I was pleased to see that despite not training in these exercises for quite some time, I still had the requisite conditioning.  No excuses were necessary for me!

I'm particularly pleased that I achieved this despite the fact that I was still stiff from the previous lesson - where I had attempted a special "49th birthday challenge" of my own devising (doing chin ups - which I hadn't done for a very long time indeed)!


It's important to remember: no student is obliged to undertake these tests.  It's a matter of choice.  We have many students who are more mature and who do not have any intention of having their physical conditioning tested.  Others do, but require special dispensations due to age, injury or illness.  All this is accommodated.

What we don't want is to be giving black belts to those who don't have the requisite strength and endurance to actually apply the techniques.  The standard is not "high".  It is a minimum.  We believe those wearing a grade from our school should have met that bare minimum.